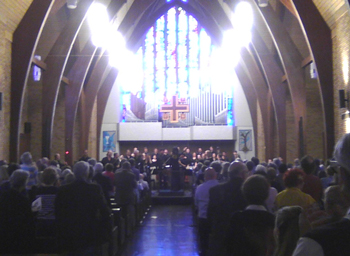 Akron Baroque marked its tenth anniversary as an ensemble with a festive performance of Handel’s Music for the Royal Fireworks and the premiere of founder Amy Barlowe’s expressive Magnificat at Fairlawn’s Faith Lutheran Church on Sunday, June 5, led by guest conductor Marie Bucoy-Calavan.

Made up largely of Akron Symphony musicians and some area freelancers, Akron Baroque plays period music on modern instruments with little fussing over equipment and only a nod to historical performance practice, but their playing is always skillful, engaging, and exciting.

So it was with George Frideric Handel’s Fireworks music, which the ensemble performed with regal pizzazz in an arrangement for full chamber orchestra rather than the original version, which only calls for wind instruments (24 oboes, 12 bassoons, contrabassoon, 9 trumpets, and 9 horns), 3 pairs of timpani, and military drums.

Handel’s music made a stunning effect in the bright acoustics of the church nave. After the stately opening of the Ouverture, Bucoy-Calavan led a brisk reading of the following Allegro, its dazzling runs played with verve by violins and oboes. “La Paix” — a reference to the end of the War of the Austrian Succession for which Handel wrote the Suite in 1749 — was poised and calm, and oboists Thomas Moore and Danna Sundet joined bassoonist Cynthia Cioffari in a delightful trio during the Menuets. The three trumpeters (Jack Brndiar, Loren Toplitz, and Steve Ostrow) were flawless.

One can only be grateful that Akron Baroque didn’t stage a historically-correct performance on Sunday, a move that would have required the church to catch on fire like the pavilion in London’s Green Park did in 1759 — although rain did make an appearance both in London and Fairlawn during the course of the piece.

Amy Barlowe describes herself as a “self-taught” composer, but her experience as a violinist has put a lot of good music in her ear over the years. She brought a fine sense of drama and expression to her setting of the passage from the Gospel of Luke, where Mary responds to the Angel Gabriel’s announcement that she is to become pregnant with Jesus.

Barlowe explained some of her musical symbolism in a pre-performance talk, illustrated by examples, and with the Latin titles of movements pronounced by Bucoy-Calavan (Barlowe modestly declined to try doing that).

Indicating that Middle Eastern-sounding chant would suffuse the piece, Barlowe noted her use of timpani both to represent Mary’s excited heartbeat and God’s intervention in the narrative, and pointed out passages where her music sought to capture Mary’s uplifted spirit.

Marie Bucoy-Calavan, director of the Summit Choral Society and recently named director of the Akron Symphony Chorus, recruited a splendid chorus of 24 young voices for the occasion, and led a finely-shaped performance of Magnificat.

Amy Barlowe’s music is fresh and inventive, and if some of her ideas aren’t developed at length, there’s no paucity of originality in her writing. Confident layering of textures, persistent rhythmic motives (the men chanting omnes generationes), and attractive instrumental solos abound. Soprano Halla Kalmansson made impressive moments of her brief solos, and the last movement — which recapitulates material from earlier in the work — carried the surprise of chimes and antiphonal trumpets playing from the rear gallery.

Jackson began the program with a recitation of Langston Hughes’ poem “Helen Keller” — the first of five poems by Hughes that served as interludes between each piece on the first half. END_OF_DOCUMENT_TOKEN_TO_BE_REPLACED

Pianos with pins and tape on strings, a bass drum and tam tam, crotales, Almglocken, and vibes. Microphones were hooked up all around the instruments. The feed was sent to speakers around the room. Lighting designer Nicholas Houfek hung incandescent globes over the arrangement of instruments from thin black wires stretching across the beams. END_OF_DOCUMENT_TOKEN_TO_BE_REPLACED

From the podium, Elim Chan set an ambitious tone for the evening. The rising star conductor, here in her Cleveland Orchestra debut, has a commanding style, and every twist and turn in Saturday’s performance tracked closely with her baton. END_OF_DOCUMENT_TOKEN_TO_BE_REPLACED