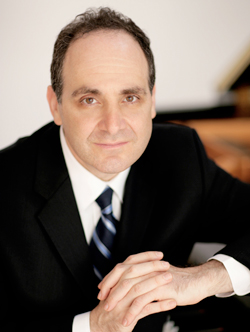 Pianist-psychiatrist Richard Kogan met Akron Symphony music director Christopher Wilkins when both were undergraduates at Harvard. During that time, Kogan played a concerto with the student-run Bach Society Orchestra under Wilkins’s baton. The two met up again on Saturday, February 6 in E.J. Thomas Hall for a performance of Sergei Rachmaninoff’s second concerto, preceded by an introductory talk by Kogan.

The idea for the concert, titled “Music and the Mind,” sprang from treatment Rachmaninoff received from Moscow physician Dr. Nikolai Dahl for depression and composer’s block following the disastrous performance of his first symphony. The violist-physician Dr. Dahl, having kept in touch with the latest psychiatric advances in France and Vienna, treated Rachmaninoff with six months’ worth of hypnosis and autosuggestion.

It worked. The composer was able to begin his second concerto early in the summer of 1900. Rachmaninoff gave a taste of his new creation in a concert in Moscow in October and premiered the completed concerto a year later. Dedicating the piece to Dr. Dahl, he bestowed one of the work’s signature tunes on the viola section in the third movement.

Kogan detailed that story in his talk at the beginning of the evening (you can watch a version of it on YouTube), illustrating his points with excerpts played by the orchestra. He extended his remarks on mental illness to include Hector Berlioz, the composer of the other work on Saturday’s program, Symphonie fantastique.

It’s always a bit tricky to draw the line between craziness and creativity. Kogan pointed up the big melody the orchestra first plays in the Rachmaninoff as an example of the composer’s depressive tendencies. But you have to wonder if brooding is a sign of psychopathy or just something hard-wired in the Russian psyche. Was Berlioz’s obsession with the actress Henrietta Smithson (the inspiration for the Symphonie fantastique) truly psychopathic, or was it more the posturing of an early Romantic who described himself as “a young musician of morbid sensibility and ardent imagination” conjuring up an opium dream for compositional purposes? The conversation continues, even while figures like Robert Schumann certainly do remain ripe for clinical analysis.

Kogan has kept up his piano chops handsomely while leading a busy career as a psychiatrist, professor, and lecturer, and his playing on Saturday was assured. All of the notes were handily in place, but the concerto never really took flight, its emotions sounding monochromatic and reined in. Tunes that might naturally have surged ahead were sluggish, and the soloist’s coordination with the orchestra was sometimes ragged.

The Berlioz was a different matter. Conducting from memory, Christopher Wilkins led a vivid but precise performance of this colorful and imaginative score, distinguished by fine playing from the strings, brilliant but never overpowering contributions from the brass, beguiling solos from English hornist Mary Kausek and offstage oboist Cynthia Warren in the “Scene in the Fields,” and crazed cackling from clarinetists Kristina Jones and Heidi Peck (on the E-flat) in the “Witches’ Sabbath.” The percussion section (including four timpanists) provided realistic thunder and chilling bell strokes, and the four bassoonists reedily sang out their robust countermelody enroute to the Scaffold.

Whether or not Berlioz could have used some personal psychiatric intervention, his Symphonie remains one of the most original of Romantic orchestral works. On Saturday, Wilkins and the Akron Symphony played it for all it was worth.

END_OF_DOCUMENT_TOKEN_TO_BE_REPLACED

Rodgers & Hammerstein’s Cinderella was originally produced for television in 1957 — seven years after the animated Disney film was released — and starred Julie Andrews. According to the Rodgers & Hammerstein website, it was viewed by over 100 million people. END_OF_DOCUMENT_TOKEN_TO_BE_REPLACED

The story line has its origin in an 1855 play and an 1842 farce that Thornton Wilder mined for his 1938 play The Merchant of Yonkers. When that turned out to be a flop, in 1954 Wilder made the crucial decision to re-center the show around the character of the legendary marriage broker Dolly Gallagher Levi and renamed it The Matchmaker. END_OF_DOCUMENT_TOKEN_TO_BE_REPLACED

The Dodero Center for the Performing Arts at the Gilmore Academy in Gates Mills is one feature of an impressive campus. The auditorium is shallow, the stage is deep, and the ensemble played without a shell. Throughout the program, the sound, especially in instruments’ lower registers, tended to disappear. END_OF_DOCUMENT_TOKEN_TO_BE_REPLACED