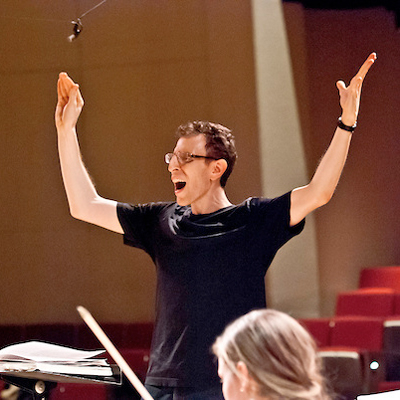 Since forming in 2001, the clever, innovative contemporary music ensemble Alarm Will Sound has gone on to become one of the most successful composer-musician collectives touring today. The group is the resident ensemble at the Mizzou International Composers Festival at the University of Missouri in Columbia. Each year the festival features eight world premieres by emerging composers.

“We’re happy to be back to Cleveland,” said Alan Pierson, Alarm Will Sound’s artistic director, during a telephone conversation. “The last time we were there was in 2009 for a concert on the Cleveland Museum of Art’s Performing Arts Series. We’re especially excited about this concert because all the pieces on the program were written for us.” And as you would expect from this versatile ensemble, their program will include an eclectic mix of musical styles.

“I don’t believe Steve Reich’s Radio Rewrite has ever been played in Cleveland,” Pierson said, adding, “we’re excited that he wrote it for us. On a completely different side of the aesthetic landscape will be Charles Wuorinen’s Big Spinoff.” Pierson explained that the piece is an arrangement of an earlier work titled Spinoff for violin, bass and conga drums, which they loved so much they thought it would be great to have it adapted for the ensemble. “We called Charles and asked him for permission to have the piece arranged for us,” Pierson recalled. “Charles said that he not only loved the idea, but he would like to be the one to do it. We were thrilled, and his arrangement is a fantastic, wild piece. What’s funny is that Wuorinen and Reich are actually friends who in New York, but their music is worlds apart.”

Monday’s program will also include works by two Cleveland-based composers: Andrew Rindfleisch’s Vesper Voices and Clint Needham’s Urban Sprawl. “We’re looking forward to giving the world premiere of Andrew’s piece and recording it on Tuesday,” said Pierson. “We wanted to perform Clint’s piece because he was a resident composer a couple of years ago at the Mizzou Festival. It’s a really fun piece that draws on the world of Copland, which is a huge part of American music. You do hear that influence in the piece, but Clint has drawn on that style and used it in a contemporary way.”

Monday will mark the second time Alarm Will Sound has performed Sean Friar’s In the Blue. “It’s a cool playful piece that we are looking forward to play again.”

Rounding out the program will be Aphex Twin’s Cock/Ver 10. “This is from one of our signature projects that dates back to the early days of Alarm Will Sound,” Pierson pointed out. Richard David James, who performs under the name Aphex Twin, is a British electronic musician. Pierson said that he was not familiar with Aphex Twin until AWS violinist Caleb Burhans suggested that they use his music as the basis for a project. He quickly discovered that many of AWS’s members were already big fans.

“Aphex Twin’s music is imaginative and sonically rich, so we developed this project of arranging his tracks,” Pierson recalled. “It turned out to be a defining project for us. We chose tracks that we were excited about, and delved into how to recreate them for the group. His music is so complex and so interesting, but when you’re listening to these wild sounds and trying to figure out how to adapt them for acoustical instruments, it forces you to be inventive in how you use your own instruments. There’s a lot of creative orchestration that went into this project, and it’s very close to our hearts. It’s one of our formative endeavors.” Pierson suggested listening to the original Aphex Twin track and then to the Alarm Will Sound arrangement.

The continuous creation of new projects is one thing that makes Pierson feel good about the ensemble. Another is that the ensemble’s membership has remained consistent. “It’s a happy group and everyone is very passionate about it, and that’s what really keeps it fresh,” Pierson said. “There are always more ideas than we have time or money to take on, and that’s great. Everyone is always firing on all cylinders, which makes it a very special ensemble.”

Pierson is also proud of Alarm Will Sound’s ongoing relationship with the Mizzou International Composers Festival. “We were part of the Festival’s creation, but the real vision and inspiration behind it came from Jeanne Sinquefield, who has actively supported new music and particularly young composers in the Missouri region for some time. Jeanne and our cellist Stefan Freund, who teaches composition at University of Missouri in Columbia, brought us together to create the Festival. But Jeanne really is the driving force. It’s important to her that Missouri be a great center for contemporary music. It’s her home.”

The inspiration for Alarm Will Sound’s founding in 2001 can be traced to the composer-led groups from the 1970s like the Steve Reich and Philip Glass Ensembles and Bang on a Can from the 1980s. “When we formed AWS there was no other group our size that had a national and international touring model like ours, and now there are quite a few.”

Is Alarm Will Sound the group Pierson envisioned? “Yes,” he answered without hesitation. “From the beginning we knew what kind of repertoire we wanted to take on, but two things I didn’t anticipated back in 2001 have occurred. First is the direction the Aphex Twin project took us, connecting AWS to popular music. Second is the degree to which the group has become a true collaborative ensemble. That emerged a couple of years in, but now it’s hard to imagine the AWS being any other way.”

END_OF_DOCUMENT_TOKEN_TO_BE_REPLACED

The Orpheus myth inspired French Baroque composers Jean-Philippe Rameau and Philippe Courbois to write expressive solo cantatas about the famous Greek musician-poet and his futile attempts — because of his own impatience — to rescue his beloved Eurydice from the grasp of Pluto in the Underworld. These are beautifully performed by the clear-voiced soprano Hannah De Priest and the velvet-throated baritone Jonathan Woody (who makes a walk-on appearance in the Rameau). END_OF_DOCUMENT_TOKEN_TO_BE_REPLACED

Now that live concerts are beginning to proliferate, it was delightful to hear Oberlin cello professor Darrett Adkins ring a change on the solo suite format with his Hypersuite No. 3 on September 28 in the Cirigliano Studio Theatre at Lorain County Community College. His program opened the new season of Signature Series performances in Elyria, and was dedicated to the memory of Eva Hornyak. END_OF_DOCUMENT_TOKEN_TO_BE_REPLACED