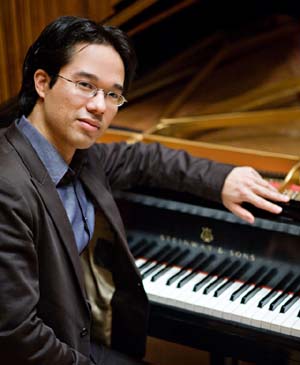 Under its music director Carlton Woods, Blue Water Chamber Orchestra will play two “firsts” in its season opener at the Breen Center in Ohio City on Saturday, September 6 at 7:30 pm. Not premieres, mind you, but rather the Number One entries in Ludwig van Beethoven’s opus list in the categories of symphonies and piano concertos.

It’s also turning out to be something of a first for Cleveland pianist Zsolt Bognár, who will be the soloist in Beethoven’s First Concerto. Though he has performed in Los Angeles, New York, Chicago, Munich, Brussels, Vienna, and in Tokyo, he hasn’t really appeared all that much in Northeast Ohio. “I think this is my first, full public performance in Cleveland since 2007 when I played my master’s graduation recital,” he told me in a telephone conversation. That performance took place at the Cleveland Institute of Music, where he studied for over a decade with Sergei Babayan.

The Blue Water invitation came, as many of Zsolt Bognár’s gigs do, through a friend and colleague. “It was Elizabeth DeMio who put my name in the hat. Carlton Woods was looking for a pianist with a local draw, and a lot of my friends have been begging me to know when I would play here. So I’m feeling a lot of pressure!”

Bognár learned Beethoven’s first concerto while in high school in Champaign-Urbana, Illinois and first played it with orchestra in 2000 in Mississippi as part of a competition prize. “Then I played it in Los Angeles with the Young Musical Foundation Debut Orchestra and my CIM classmate, Case Scaglione, who is now the assistant to Alan Gilbert at the New York Philharmonic. It’s fun working with a friend. I always feel like I need that type of energy on the stage.”

I asked Zsolt Bognár whether he plans to play Beethoven’s cadenzas on Saturday. “There’s a delightful cadenza by Edwin Fischer, and an amazing one by Glenn Gould, but I’ve decided on Beethoven, who wrote three of them. I love the first one, but it’s incomplete. Up to the past week I hadn’t decided which one of the others to use. Today I decided on the small one. The larger one was written much later and is stylistically jarring, somewhat out of scale with the rest of the piece. But the small cadenza is sparkling and short — very much like Haydn. But I’m envious of musicians who improvise their own. I never learned to improvise because I was so focused on learning repertoire. I was having this conversation with my friend who is a cellist at CIM. The challenge with cadenzas if they’re written out is to have the same sense of wonder as if they were being created on the spot. But I’ll be trying to do everything I can to give Beethoven’s a sense of freshness by pointing up unusual modulations and key areas.”

Bognár spent an interesting summer traveling, practicing and performing. “It was a bit surreal,” he said. “Because of some unfortunate timing, my family had planned a vacation before two weeks of concerts I had scheduled in Europe. My father’s big dream was to bring us all to the Greek Isles and Rome to celebrate his seventieth birthday. I wasn’t going to miss that trip, but the only way to make it work was to take an electric piano along. I don’t think I’ll ever have another chance to practice with that wonderful, distracting scenery as a backdrop.”

Bognár’s experience lugging that keyboard around became the subject for a remarkable entry in his blog. Other travel vicissitudes included being parted from his luggage before his concerts in Vienna. “My tux didn’t arrive so I had to buy an entirely new set of tails. You start crying when you see the price tag, but with all the state balls there there’s huge competition for formal wear. So I have a very nice Viennese tuxedo.”

Bognár’s first public concert in Vienna, in the Mozarthaus, was terrific. “The audiences are so receptive and responsive to the fact that someone is trying to give his all. There were long, sustained ovations.” The pianist made all the concert arrangements himself. “Everything I do is self-made, because I haven’t really done the standard competition circuit. This was all done through friends. Usually I begin by giving a little Hauskonzert and invite people who have small series who may want to have me in the future.”

In addition to his life as a pianist, Zsolt Bognár has found himself developing a second career as an interviewer for a series of videos called “Living the Classical Life”. “That all started by accident in 2010-2011. I was trying to get a website together to develop recital opportunities and found that presenters wanted to get information online. One idea I developed with a couple of friends was to make a short video about me. A friend of a friend who had a production company in NYC offered me an affordable rate. As I started interacting with my musical friends, I started to reverse roles, asking them about their own musical careers. The producer recut the video and said, ‘maybe this could be a little show’. It’s been kind of fun. I’ve always admired Charlie Rose and ‘Inside the Actors Studio’ and hearing about peoples’ lives and process. There’s no ordinary life in music, everyone has a story to tell. I realized that I’m always talking and love to hear peoples’ stories, so this seems like an organic extension of what I like to do anyway. The interviews are not meant to be a parade of famous names, but without those names, nobody is really paying attention. We just filmed Joshua Bell in his New York City apartment — and his PR people came to us wanting to do an interview. We were initially allotted 30 minutes, but Bell gave us 80. I spent one hour with Stephen Hough, who doesn’t need much editing, but then I had known him for many years.”

What’s “A Day in The Life” like for Zsolt Bognár? “Every day is very different. That’s tricky for one who thrives off of routine. I take my cue from intuition and what inspires me. Sometimes I get out of bed and head for the piano, or decide to watch some great piece of cinema. I try to get as much artistic input as possible. Since I arrange all my concerts myself, there’s a lot of office work. It sometimes feels like life could be an endless stream of catching up with emails.” But each day, Bognár tries to take an hour-long walk in Lakeview Cemetery “to be alone with my thoughts, and let my mind wander. Yesterday, my practicing wasn’t going anywhere, so I took a walk and then even the technical stuff improved.”

For Bognár, a variety of influences stimulates his life as a musician. “There are a lot of pianists who can play astonishingly well and all the notes correctly, but I think that’s a separate category from pianists who can attract audiences who want to come back. That requires more. A lot has of that to do with the way they live their lives and the impressions they gather and the people they come in contact with.”

The cimbalom was the feature of the show, an instrument capable of taking on many personas. Its performer, Chester Englander, has shaped his career around the instrument, and has inspired composers to write more repertoire for it, some of which was presented on the program. END_OF_DOCUMENT_TOKEN_TO_BE_REPLACED

You wouldn’t expect that acoustic from a glance at the nave, which is wide and long, but not especially lofty. But when I guest conducted a local amateur choir and professional orchestra in Beethoven’s Mass in C there a few years back, during the first rehearsal we released the final chord of the “Gloria” and listened in astonishment for the next several seconds. The sound continued to roll down the space like the big wave that surfers dream about. END_OF_DOCUMENT_TOKEN_TO_BE_REPLACED