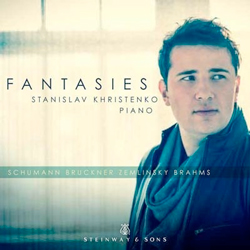 Ukrainian-born pianist Stanislav Khristenko won the most recent Cleveland International Piano Competition in 2013, sealing his victory with a magisterial performance of Brahms’s first concerto with The Cleveland Orchestra at Severance Hall.

Khristenko’s new recording on the Steinway & Sons label — a venture launched in October of 2010 — captures him in a different musical mood, but one that still expresses itself partly through the music of Brahms. Fantasies, recorded in February of this year, concludes with the Fantasien, op. 116, a set of capriccios and intermezzos that distill a lifetime of Brahms’s harmonic and rhythmic innovations into seven relatively small works.

Ruminative pieces (No. 2, Intermezzo in a minor) alternate with more extroverted ones (No. 7, Capriccio in d minor, almost a toccata in its outlying sections). It’s worth following these pieces with the score in hand to see how Brahms plays with sprung rhythms and odd meters — the ear and the eye frequently don’t experience these pieces in the same way.

Throughout the Brahms, Khristenko moderates his formidable technique to produce lyrical playing of exquisite subtlety, but when digital prowess is called for, he has plenty in reserve to call up.

Another of Khristenko’s endearing qualities as an interpreter is clearly present in his reading of Robert Schumann’s Fantasie in C, which begins the album with a large gesture. This half-hour-long love letter to Clara, written during their separation in the summer of 1836, gives many pianists an opportunity to lose themselves in the woods.

Khristenko is equally aware of poetic expression and structure, allowing him to shape the three-movement work into an emotive experience that never wanders off into musical chaos while still preserving an improvisatory feeling. His articulation is bright and clear, he brings out inner voices with warmth and presence, and his layering of voices into light but lyrical textures is superb. His treatment of Schumann’s obsessive dotted rhythms in the middle movement is graceful, as is his handling of another Schumann trait — the odd syncopations in the third movement that sound like they occur on the beat.

The rest of the album is devoted to Anton Bruckner’s Fantasie in G Major (1868) and to Alexander Zemlinski’s Fantasies on poems of Richard Dehmel, op. 9. The Bruckner is a three-page oddity, more of a little aria than a real fantasy, but it offers a refreshing entremet after the sprawl of the Schumann.

Khristenko brings a fine sense of musical poetry to Zemlinki’s setting of four little verses by Dehmel, the poet who provided Arnold Schoenberg with the inspiration for his Verklärte Nacht. The four fantasies, Stimme des Abends, Waldseligkeit, Liebe and Kaferlied, could almost be texted and become Lieder mit Worten. The words are semi-impressionistic, the music colorful with many levels of shading which Khristenko captures sensitively.

Fantasies is not a disc that will regale you with pianistic fireworks, but a collection of structured musings by four substantive composers that will reward multiple hearings. In a recent interview with this publication, Stanislav Khristenko said, “One of my thematic interests is fantasies.” That’s obvious both in the planning and execution of this project.

END_OF_DOCUMENT_TOKEN_TO_BE_REPLACED

Then, you heard all the qualities that make for a stunning soloist. Winner of the 2013 Cleveland International Piano Competition, Khristenko was back in town this month for a recital in Piano Cleveland’s summer series, Piano Days @CLE. And he couldn’t help but revel in the spotlight a little, even as he settled into a more collaborative role at the keyboard for his program, “Stanislav and Friends.” END_OF_DOCUMENT_TOKEN_TO_BE_REPLACED