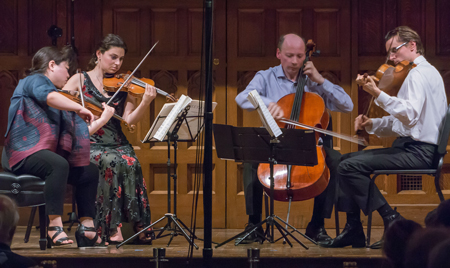 Nancy Osgood, Board Chair of ChamberFest 2015, began на здоровье! (Good Health!) by dedicating the program to the memory of James Ireland III, one of the great benefactors of the arts in Cleveland. On Friday, June 26, CWRU’s Harkness Chapel hosted the festival’s all-Russian program, which attracted a healthy number of younger listeners in addition to a large number of seasoned concertgoers.

The program included works by Beethoven, Prokofiev, Rachmaninoff, and Schnittke. Of course, Beethoven is not Russian. But Andreas Razumovsky, who commissioned three string quartets from Beethoven, was the Russian ambassador to Vienna. Beethoven honored his patron by using Russian folk tunes as the thematic material for several movements within the quartets.

After intermission, Yura Lee and Diana Cohen (violins), Dimitri Murrath (viola), and Clive Greensmith (cello) performed the String Quartet in F Major, Op. 59, the first of the “Razumovsky” quartets, to complete the concert. Greensmith led the opening, his animated performance of Beethoven’s merry tune contrasting refreshingly with the dark, humid atmosphere of Harkness Chapel. Lee took over the melody, effortlessly matching Greensmith’s musical disposition. Throughout the first movement, the members of the quartet tossed melody and accompaniment lines back and forth with assurance.

The fragmented nature of the melodies persists and increases in the scherzando movement, where all four members play only a small part of the melody as solos. As in the first movement, the trade-offs were accomplished with style, and the quartet made a clear distinction between the character of the fun-filled first theme and the ominous trio.

The adagio featured more rhythmic unison and some wonderfully passionate musicianship from the quartet. Lee fearlessly played the short cadenza which bridges to the final movement, leading the opening of the allegro with spirit. ChamberFest’s schedule doesn’t allow for much rehearsal time, and certainly there were small issues of intonation and precision throughout the work, but the quartet’s intrepid energy carried the performance masterfully. 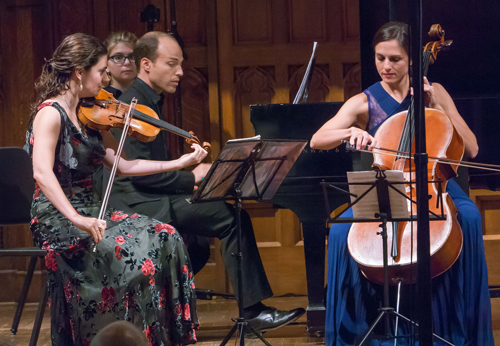 The concert opened with Rachmaninoff’s Trio élégiaque No. 1. Cellist Julie Albers led the introduction with a gentle, shivering ostinato. Diana Cohen quickly joined her, and pianist Orion Weiss delivered an ardent melody over the shimmering accompaniment with somber nobility. Rachmaninoff reportedly wrote the single-movement Trio in only four days, and this may account for its lack of motivic variety. But the performers’ commitment to expression made it easy to imagine the cold, Siberian plains of Northern Russia. 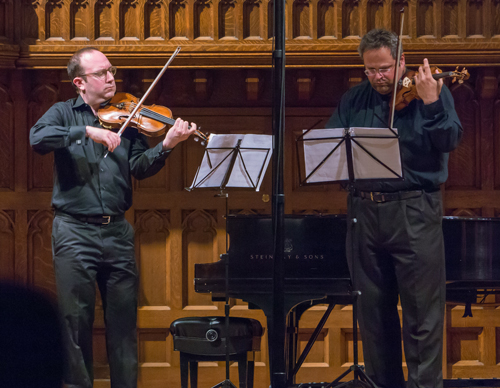 The two works by Alfred Schnittke (1934-1998) — a little-known Soviet composer whose work owes its inspiration to the music of Dmitri Shostakovich — were the highlight of the concert. David Bowlin (violin) joined Yehonatan Berick (violin) for the Prelude in Memoriam Dmitri Shostakovich, the theme of which features the notes D-Eb-C-B, which in German notation spell the first letters of the name: D. SCHostakovich. The duo played with a rock-steady pulse, delivering the composer’s angst-filled dissonances with excellent intonation. Bowlin’s solo in the middle of the piece was particularly striking, before he and Berick faded into an uneasy silence at the close of the piece. 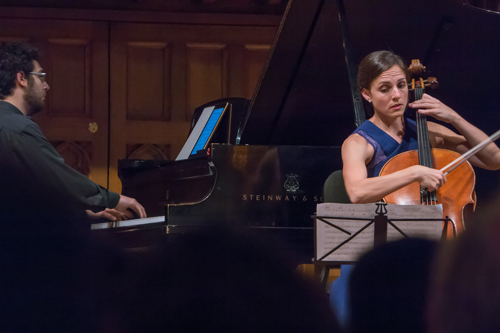 Albers returned to the stage with pianist Roman Rabinovich for Schnittke’s Musica Nostalgica. The pair opened the simple minuet with elegant sentimentality, trading the melody back and forth with increasing pathos. As the work progressed, Albers played Schnittke’s extended techniques with impressive poise. The quarter-tones added a level of hysteria to the tune, and when she played the melody in the high reaches of the cello’s range, her control over the piece’s harmonics never wavered.

The first half wrapped up with Prokofiev’s Quintet for Oboe, Clarinet, Violin, Viola, and Double Bass, Op. 39, which featured Franklin Cohen (clarinet), Nathan Farrington (bass), Nathan Hughes (oboe), Alexi Kenney (violin), and Jennifer Stumm (viola). The music was written for the roving ballet company, Trapeze, during Prokofiev’s stay in France. He later revised the score into a suite of six movements. The humidity in Harkness provided a challenge to the reed players, but the sextet played with an almost orchestral palette of color, bringing the different musical characters to life and enchanting listeners with their nimble technique. Farrington’s delivery of the opening of the second movement was especially superb, and the sextet as a whole performed with exuberant grace.

Jackson began the program with a recitation of Langston Hughes’ poem “Helen Keller” — the first of five poems by Hughes that served as interludes between each piece on the first half. END_OF_DOCUMENT_TOKEN_TO_BE_REPLACED

Pianos with pins and tape on strings, a bass drum and tam tam, crotales, Almglocken, and vibes. Microphones were hooked up all around the instruments. The feed was sent to speakers around the room. Lighting designer Nicholas Houfek hung incandescent globes over the arrangement of instruments from thin black wires stretching across the beams. END_OF_DOCUMENT_TOKEN_TO_BE_REPLACED

From the podium, Elim Chan set an ambitious tone for the evening. The rising star conductor, here in her Cleveland Orchestra debut, has a commanding style, and every twist and turn in Saturday’s performance tracked closely with her baton. END_OF_DOCUMENT_TOKEN_TO_BE_REPLACED