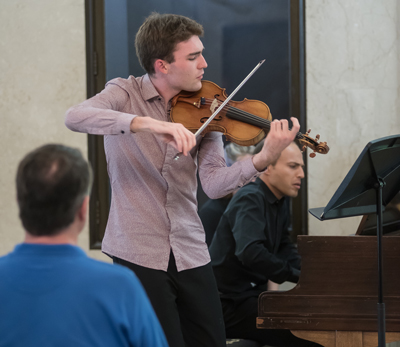 There will be an explosion of world-class chamber music when ChamberFest Cleveland kicks off its fifth season this week. In their directors’ message, Diana and Franklin Cohen say, “With Season 5, ‘Tales & Legends,’ we are offering more concerts and special events at some very cool venues that will delight and surprise you at every turn…not to mention a spectacular cast of musicians, vocalists, actors, and composers like none to date. The pieces that comprise ‘Tales & Legends’ spin tales from the profane to the divine…and in at least one instance, the controversial. Hold onto your hats as ChamberFest Cleveland takes you on one fantastical ride!”

This is the first in a series of articles highlighting ChamberFest artists.

Last season violinist Alexi Kenney wowed ChamberFest audiences during his recital at the Cleveland Public Library (above, with pianist Orion Weiss). On Wednesday, June 15 at 12:00 pm in the Smith Studio at WCLV, Playhouse Square, Kenney will be joined by cellist Oliver Herbert for a Young Artist Recital titled “Nosh at Noon.” The program will feature Zoltán Kodály’s Duo for violin and cello, Op. 7 and arrangements of Bach’s Two-Part Inventions. “I’ve never played the Kodály, but always wanted to,” Kenney said during a telephone conversation. “There is limited repertoire for violin and cello, but this duo stands out as one of the greatest. I think the Bach will make a nice counterpart to the Kodály, which is so intense and very virtuosic.”

A lot has happened to Alexi Kenney since he made his ChamberFest debut last summer. Courtesy of the New England Conservatory, he was granted the use of the “Joachim-Ma” Stradivarius of 1714, the violin used by Joseph Joachim for the premiere performance of the Brahms Concerto. In March, Kenney was awarded an Avery Fisher Career Grant, and last week he joined the roster of Opus 3 Artist Management.

“It’s been a rapid-fire year,” Kenney said. “The Avery Fisher Career Grant came out of the blue. You don’t apply for it, and you don’t know that you’re being nominated for it either, so it was pretty shocking.”

For the moment, Kenney is being cautious when it comes to using the prize money to advance his career. “One thing I’ve been looking to do is to get a new bow, so that’s an easy way to spend a lot of money. Actually it’s helpful to my mental state by making me feel a lot more financially secure, and that alone is a great thing. I’m sure I’ll figure out what to do with it, but I probably won’t spend it all in one place.”

Kenney looks forward to playing Wednesday afternoon’s concert with Oliver Herbert. “We’re both from the Bay Area, although he’s a little younger than me so our time in the San Francisco Symphony Youth Orchestra didn’t overlap. But I always heard his name, I just never got the chance to meet him. I remember hearing him play Bach on a YouTube video and falling over because it was so good.”

The two finally met for the first time last summer when they were invited to play a house concert together. “A flutist friend of mine decided to do this concert, and she told me that Oliver was in town and he’d love to meet me, so why don’t we play some trios? So we did. I just love his playing and I’m excited to work with him for real this time.”

Kenney said that he’s very happy to be returning to ChamberFest for the second time. “I don’t know if I could think of a more perfect environment,” the violinist said. “It’s extraordinary how much it feels like a family, and that’s partly because of the people Frank and Diana choose, but also because all of the rehearsals happen in Frank’s house. We have meals there and we stay with nearby host families, so it feels like this amazing community. Last summer I forged some beautiful connections both musically and personally that I’m sure I’ll keep for many years to come.”

It might seem that there’s not a lot left to discover after three decades of experience with the Red Priest’s charming and evocative score, but this performance boasted a secret weapon: the young Spanish violinist Francisco Fullana, now the Orchestra’s artist-in-residence, whose affecting personality and easy virtuosity raised the solo part a quantum leap above the merely extraordinary. END_OF_DOCUMENT_TOKEN_TO_BE_REPLACED

END_OF_DOCUMENT_TOKEN_TO_BE_REPLACED

The Cleveland Orchestra’s second performance of the new season on Sunday afternoon, October 17 at the newly renamed Mandel Hall at Severance Music Center was just such an occasion. If the ensemble’s return to public concerts under the baton of Franz Welser-Möst wasn’t enough reason to light a bonfire, the Cleveland debut of a new work written for one of the Orchestra’s most popular soloists, and the swan song of one of its longest-serving members added extra fuel to the celebration. END_OF_DOCUMENT_TOKEN_TO_BE_REPLACED