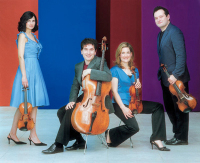 “We’ve played several times on the series and we’re very happy to be back,” Belcea Quartet violist Krzysztof Chorzelski said during a telephone conversation from London, the quartet’s home base. “We love playing in Cleveland and we have very nice memories. The audience is always very special.” On Tuesday, October 21 at 7:30 in Plymouth Church The Cleveland Chamber Music Society will present the Belcea Quartet in a concert featuring works by Mozart, Berg and Brahms.

Founded at the Royal College of Music in London in 1994, the Belcea retains two of its founding members, Romanian violinist Corina Belcea and violist Krzysztof Chorzelski. Violinist Axel Schacher and cellist Antoine Lederlin complete the quartet’s current membership. “We will celebrate our 20th anniversary as a quartet quite soon,” Chorzelsk said with a hint of astonishment in his voice. “I find it hard to believe.”

To what does Chorzelski attribute the group’s longevity? “I think it’s the shared common goal of going as far as possible into the repertoire that we love. And making it reflect where we are in our lives as a quartet,” he said, adding that they are lucky to be able to play so much great music by great composers. “There’s also a quality and depth to the music, so there is absolutely no limit to how far we can go in exploring it. The music speaks so deeply to all of the aspects of our existence. For us it feels like a never-ending process, so there’s never a feeling of boredom or that something has been fully accomplished.”

We asked Krzysztof Chorzelski to say a few words about their Chamber Music Society program. 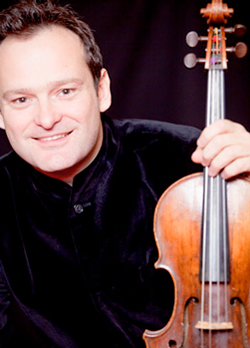 Mozart’s Quartet in F Major, K. 590 is a work the Belcea are returning to after several years of letting it rest.

“To me the quartet is immersed in his last operas. I particularly hear bits of The Magic Flute and The Marriage of Figaro in this music. The writing is so remarkable because the individual lines are so operatic. And many of the solo parts are given to the cello. Yet there’s this balance between the incredible freedom of operatic singing and at the same time there a fantastic discipline and logic, where not one note is superfluous. Yes, it’s incredible. The Finale is interesting because it’s one of the most Haydn-like finales that Mozart wrote. It’s just a joy to play. It’s been wonderful to go back to it, and in many ways it feels more comfortable now. It’s starting to feel like an old friend.”

“I think this is the most difficult piece in the string quartet repertoire, from my experience. And this, too, is a piece we are returning to after not having played it for many years. But I think the best way to learn these types of pieces is to learn them fairly early, let them rest, then return to them — and we are at that stage. The inventiveness of Berg’s writing is just staggering. It’s beautiful, it’s sensual, mysterious, wild. And in some places it’s so dark and animalistic. Yet in other places it’s so beautiful, which is interesting because Berg uses twelve-tone technique for most of it, yet it sounds so passionate. Not like a lot of twelve-tone music, which just sounds dry. That’s never the case in this quartet. It’s a fantastic tour-de-force.”
Brahms’s Quartet in C minor, Op. 51, No. 1

“The idea behind this program is Brahms as seen through the eyes of the two Viennese Schools. It’s interesting to see Brahms as a bridge between the two worlds.”