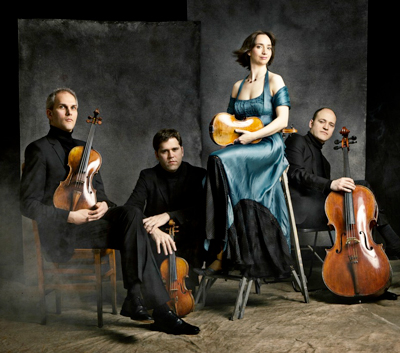 The program might have looked conventional, but Cuarteto Casals’ performances of string quartets by Haydn, Shostakovich, and Beethoven on the Cleveland Chamber Music Society series last Tuesday at Plymouth Church were exceptional. Every piece shone with its own individual character, contributing many-hued elements to an outstanding whole.

Three-quarters of the Barcelona-based ensemble played standing: violinists Abel Tomàs and Vera Martinez (who alternate as leader) and violist Jonathan Brown surrounded cellist Arnau Tomàs, who was seated on a platform. You have to wonder why more quartets don’t adopt this simple change in format. It improves sight lines by elevating the players above the heads of the audience, but more importantly, it makes a significant difference in the projection of their tone into the audience.

A second simple but effective technique Cuarteto Casals uses is to change technology between pieces. A London foundation prize paid for a set of matching, classical-period bows the players use for repertoire up through Schubert. That made a subtle but pronounced difference in both Joseph Haydn’s Quartet in f, Op. 20, No. 5, and in Ludwig van Beethoven’s late Quartet No. 12 in E-flat, Op. 127. The more convex bows allow for more nuance of tone and more suppleness of articulation.

Playing first violin, Abel Tomàs led a clean and warm reading of the Haydn quartet. The lovely, subtle ending of the slow third movement led to a double fugue in the finale featuring a lively countersubject and covering a full range of dynamics. The piece ends, surprisingly, on an open fifth.

Vera Martinez took over the driver’s seat for an intense but never strident performance of Dmitri Shostakovich’s Quartet No. 5 in B-flat. Measured and deliberate, the first movement unfolded with dramatic logic, ending on a long, perfectly-controlled high note in the top violin part that connected it to the bleakness of the second movement. Cuarteto Casals (and Shostakovich) created a temporary oasis in the third, which begins with and returns to a waltz-like theme while otherwise exploring dark ideas that lead to stunning climaxes. The players marked the end by playing its surprising set of major chords with amazing power.

After intermission, strong chords appeared once again at the opening of Beethoven’s Op. 127, then strange adventures lurked around every turn in the road. Cuarteto Casals (with Vera Martinez continuing as first violin) took note of the composer’s impulsive key changes, paid close attention to the variety of styles he visits in the second-movement theme and variations, and played the jagged rhythms of the Scherzando with unflagging drive. After several false endings (courtesy of LvB), they brought this strange but beguiling piece to a close with a graciousness that contrasted perfectly with the raucousness that preceded its coda.

Nothing more needed to be said, played, or heard this evening after these three masterful performances. In spite of two hearty ovations, Cuarteto Casals let Beethoven have the last word.

END_OF_DOCUMENT_TOKEN_TO_BE_REPLACED

Rodgers & Hammerstein’s Cinderella was originally produced for television in 1957 — seven years after the animated Disney film was released — and starred Julie Andrews. According to the Rodgers & Hammerstein website, it was viewed by over 100 million people. END_OF_DOCUMENT_TOKEN_TO_BE_REPLACED

The story line has its origin in an 1855 play and an 1842 farce that Thornton Wilder mined for his 1938 play The Merchant of Yonkers. When that turned out to be a flop, in 1954 Wilder made the crucial decision to re-center the show around the character of the legendary marriage broker Dolly Gallagher Levi and renamed it The Matchmaker. END_OF_DOCUMENT_TOKEN_TO_BE_REPLACED

The Dodero Center for the Performing Arts at the Gilmore Academy in Gates Mills is one feature of an impressive campus. The auditorium is shallow, the stage is deep, and the ensemble played without a shell. Throughout the program, the sound, especially in instruments’ lower registers, tended to disappear. END_OF_DOCUMENT_TOKEN_TO_BE_REPLACED