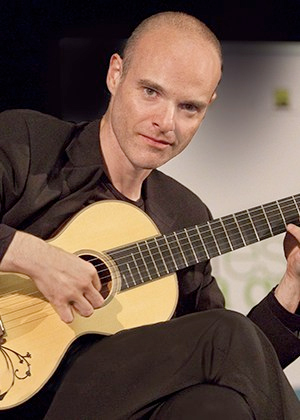 The audience in the Cleveland Institute of Music’s Mixon Hall witnessed a beautiful solo classical guitar recital on Sunday afternoon, June 4 by renowned Spanish virtuoso Ricardo Gallén, as part of the Cleveland International Classical Guitar Festival. Gallén’s audience, an appreciative mix of professional guitarists, students, and the public, heard a program of Classical works played on a small-but-penetrating Bernhard Kresse copy of a Johann Georg Stauffer romantic guitar, and music by living composers played on a larger modern guitar by Paco Santiago Marin of Spain.

The highlight was Gallén’s stunning performance of Leo Brouwer’s Sonata del Pensador (“Sonata of the Thinker”), No. 4 (2013). Brouwer, himself a guitar virtuoso, explored experimental music by Iannis Xenakis and Luigi Nono in the ‘60s, and later recorded many modernist works. Guitarists admire his compositions because he writes so idiomatically for the instrument.

The balance of the program was dedicated to Fernando Sor’s three sonatas. The Andante largo of the Grande Sonata, Op. 25, contains some fine contrapuntal treatment, interesting chromatic harmony, and attractive antiphonal writing contrasting the high and low registers of the instrument — features that Gallén performed very expressively.

The Grand Sonata in C, Op. 22, has a more conventional four-movement structure. The opening Allegro sparkled with a lively, Haydnesque style. The Adagio was soulfully expressive. The Menuetto-Allegro dragged a bit, but the following amusingly short Rondo-Allegretto added a note of unpredictability.

After the Brouwer Sonata, Gallén returned for a much-demanded encore. Since his most recent recording on the Eudora label spotlighted all four of Sor’s sonatas, it was no surprise that Gallén performed the fourth and earliest as his encore: The Grand Solo in D, Op. 14. Considering how early it came in Sor’s guitar output, the movement sported a surprisingly adventurous development section akin to Beethoven, as well as some lovely dynamic contrasts. All these elements scintillated in the talented performer’s flawless performance.

Jackson began the program with a recitation of Langston Hughes’ poem “Helen Keller” — the first of five poems by Hughes that served as interludes between each piece on the first half. END_OF_DOCUMENT_TOKEN_TO_BE_REPLACED

Pianos with pins and tape on strings, a bass drum and tam tam, crotales, Almglocken, and vibes. Microphones were hooked up all around the instruments. The feed was sent to speakers around the room. Lighting designer Nicholas Houfek hung incandescent globes over the arrangement of instruments from thin black wires stretching across the beams. END_OF_DOCUMENT_TOKEN_TO_BE_REPLACED

From the podium, Elim Chan set an ambitious tone for the evening. The rising star conductor, here in her Cleveland Orchestra debut, has a commanding style, and every twist and turn in Saturday’s performance tracked closely with her baton. END_OF_DOCUMENT_TOKEN_TO_BE_REPLACED