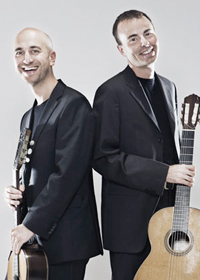 On Saturday, May 31 at 8:00 pm in the Cleveland Institute of Music’s Mixon Hall, SoloDuo will make a return visit to the Cleveland International Classical Guitar Festival with a program titled “Metamorphoses.” The performance includes the music of Albéniz, Beethoven, Debussy, Granados, Jolivet, and Rodrigo. On Sunday, June 1, SoloDuo will present a master class from 11:30 am until 2:30 pm in CIM’s Studio 113. The event is free and open to the public.

Although the Duo’s touring schedule did not allow for a telephone conversation, Matteo Mela and Lorenzo Micheli graciously agreed to answer questions by e-mail

Carlyn Kessler: How did the two of you meet?

SoloDuo: We met about fifteen years ago in San Antonio, Texas, while we were both on tour as soloists. We literally bumped into each other by chance. We both thought we could get along pretty well, and we met for lunch a few weeks later when we got back to Europe. That was the beginning of everything. In that same year we worked together on a summer festival project, but the idea of playing together was still very remote. It would take four more years before we decided to form the Duo. Somehow a musical ensemble, such as a duo, is like a marriage: discussing different ideas, arranging your schedule, rehearsing, traveling, or simply ordering a meal…you really need to know the other one well before you can even think of spending all that time with him.

CK: You both have distinguished solo careers. What inspired you to perform together?

SD: I think the most simple but most true answer is that no distinguished solo career will ever give you the pleasure and joy of making music with somebody else.

CK: You reside in different countries, although Lorenzo teaches in Switzerland, where Matteo lives. What is your rehearsal process, and how frequently are you in the same place?

SD: Although we have never lived in the same city — and now we even live in two different countries — we have always tried to keep our rehearsal schedule as regular as possible. We usually meet in the heart of the Alps, halfway between Milan and Geneva, our two cities. This means a lot of traveling and a little more planning work when we get together to rehearse (usually every other week), but it also means that we have an extra reason to be prepared for the next rehearsal. That extra effort that you have to make to get together really pushes you to work harder in preparation for the rehearsal, and teaches you how to make the most out of the (little) time that you have.

CK: How much time do you devote to your duo as opposed to your solo careers and other endeavors?

SD: The duo is the real core of our artistic careers: we devote most of our time to it and most of our energies. Solo playing — and individual practicing — is also important, especially when it becomes a source of inspiration, an indispensable technical training and an open window on the rest of the guitar repertoire. Chamber music and collaborations with other musiciansd are also a major part of our musical life. We have several projects going on at the moment, including a program with a narrator and our early music consort with theorbo, baroque guitars, archlute and voice, with which we have released a couple of CDs devoted to Italian music from the 17th century.

CK: Have you commissioned pieces for your duo?

SD: We’ve worked with several composers in the past years, but lately other programs and projects took over and we’ve been a bit lazy on that front. Promoting new music, though, should always be on the top of a musician’s list of priorities.

CK: In the Cleveland recital program, you will be performing an interestingly varied range of repertoire. How did you choose this program? Does it have a theme?

SD: The Cleveland recital is called “Metamorphoses,” and it is based on the theme of “transformation.” Most of the pieces that we will perform are arrangements of music originally written for other instruments. Through the transcription, these masterworks undergo a complete transformation in terms of colors, dynamic range, and phrasing. Each work — such as Debussy’s Clair de Lune, or Beethoven’s “Moonlight Sonata” — glitters with new lights in their “new lives” on the 12 strings.

CK: What would you like the audience to take away from this program?

SD: As a guitar duo, our mission would be accomplished if the audience stepped out of the concert hall thinking, “Did we just hear two guitars? It rather sounded like one instrument.”

CK: When was the last time you performed in Cleveland?

SD: We played in Cleveland a couple of years ago, in the same venue, for the Cleveland International Guitar Festival. The organization of the event is absolutely perfect. Moreover, we consider Mixon Hall at CIM one of the best concert halls in the world, and certainly the ideal stage for the guitar. All the nuances that you want to do can be heard without effort.

END_OF_DOCUMENT_TOKEN_TO_BE_REPLACED

Rodgers & Hammerstein’s Cinderella was originally produced for television in 1957 — seven years after the animated Disney film was released — and starred Julie Andrews. According to the Rodgers & Hammerstein website, it was viewed by over 100 million people. END_OF_DOCUMENT_TOKEN_TO_BE_REPLACED

The story line has its origin in an 1855 play and an 1842 farce that Thornton Wilder mined for his 1938 play The Merchant of Yonkers. When that turned out to be a flop, in 1954 Wilder made the crucial decision to re-center the show around the character of the legendary marriage broker Dolly Gallagher Levi and renamed it The Matchmaker. END_OF_DOCUMENT_TOKEN_TO_BE_REPLACED

The Dodero Center for the Performing Arts at the Gilmore Academy in Gates Mills is one feature of an impressive campus. The auditorium is shallow, the stage is deep, and the ensemble played without a shell. Throughout the program, the sound, especially in instruments’ lower registers, tended to disappear. END_OF_DOCUMENT_TOKEN_TO_BE_REPLACED