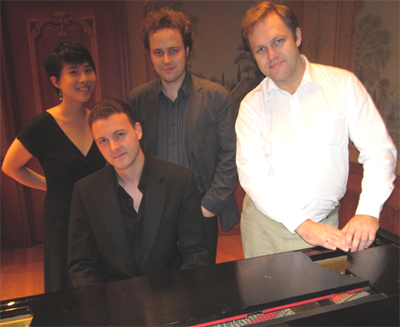 By Wednesday evening, when the Semifinal Round ended, we had gotten to know a lot about the pianistic personalities of twenty-six musicians, but we were eager to learn more about the four Finalists. The Competition kindly provided the opportunity to chat with them in pairs in Reinberger Chamber Music Hall just before their individual séances with conductor Christopher Wilkins at Severance Hall on Thursday, when each would talk through their chosen concerto for the Final Round on Friday and Saturday with The Cleveland Orchestra.

First, we wanted to know how the four came to the piano in the first place, and when the magic moment arrived when each decided to pursue a professional career. For three of the players, there were already professional musicians in the family who facilitated their early discovery of music.

Kyu Yeon Kim, 25, grew up in Seoul, South Korea. “My mother is a pianist and I was influenced by her. For me the piano was like furniture and it was natural for me to take it up”. Her older sister by 13 years is a professional violinist, but her father is a banker.

Alexey Chernov, 28, grew up in a very musical household in Moscow. “My mother is a musicologist at the Moscow Conservatory and my father was a musicologist as well. I started at the age of 5, and it was not my decision”, he laughs. The family pattern continues. “My wife is teaching at the Central Music School in Moscow, and my daughter has just started to play the piano”. Alexey was married at the age of 19, and his wife and three children are in Moscow, eagerly following the news from Cleveland.

Alexander Schimpf, 29, also has musical parents. “My mother is a very busy violin teacher of younger children. My father is a very good violin player, but he teaches other subjects at a high school. The piano was always there in our home. My sister started before me, and there are photos of us as small children sitting on the piano bench together. I started lessons at 5, but there was no pressure”.

The exception is Eric Zuber, 26, who grew up in a small town near Baltimore. “My dad is in car sales, and my mom is a stay-at-home mom. My brother is a graphic artist and computer animator. I always had a good ear. I came back from church one day, got out our little Wurlitzer electric keyboard with 66 keys, and plunked out the hymn we had just sung”. That was very early on, before Zuber started lessons at the age of four. “I had perfect pitch, which was kind of a supernatural thing. My dad would play a chord cluster in the other room and I could name the pitches. It was amazing to them. When I was six, it was decided that I should go to Peabody”.

Nature or nurture, none of the four can recall a precise point in time when they decided to play the piano for a living. As Zuber says, “I don’t think there is a moment. It’s a process. You realize you have a certain gift, and once you’ve spent a lot of time at it, it seems a waste to go into something else. It’s something you love to do, and it’s emotionally satisfying”.

Kyu Yeon Kim agrees. “It was a process for me, too. I was interested in other things until I was 11 or 12 but then I played in a concert and a competition which made me want to be a pianist. When you’re young and people applaud, it feels good!”

(Zuber and Kim, who almost finished each other’s sentences, have been friends since they met at the Gina Bachauer youth competition in Salt Lake City in 2001 “and we bump into each other from time to time”, says Zuber).

Alexey Chernov began playing professionally at a very young age. Alexander Schimpf came to his decision “rather late, during my last years of high school. The question was, would I find anything else besides music exciting enough to spend the rest of my life doing? I decided to give it a try”.

Though the Cleveland Competition has some strict requirements about repertory, what pieces individual competitors choose to fulfill those requirements can be crucial. What was each finalist’s strategy for this competition?

“Everyone started with the same strategy”, Chernov quips, “to win. Otherwise, why come to the competition?” Thinking in retrospect about his own playlist, Chernov admits, “it may seem strange, but I have no Russian pieces in this competition. Usually I play a lot of Scriabin —two years ago in Leipzig I played Scriabin in each round”.

“I tried to plan pieces that I had already spent some time with before”, Schimpf notes. “Even if you have only one piece that is new, it takes much time to prepare, and takes time away from other pieces. I didn’t want to make any experiments”.

Zuber’s game plan “was to be prepared — this time. I generally get bored quickly with repertory and am constantly trying new things, but the people who are very successful have programs they stick with for years. I have a friend who plays the same set of pieces at every competition, and he usually wins. So I have gone for refinement rather than newness and I’m playing pieces I’ve had in my system for some time. The refinement process never ends”.

Thinking back on her repertory choices, Kim says, “I played two big Schumann pieces and I’m never going to do that again. They’re very complex and I have to avoid getting really crazy when I play them”. Zuber chimes in: “There are so many little changes of tempo and rubato that it’s easy to get lost in the music, especially in Kreisleriana and the Humoreske, which are diffuse and sound really erratic. But Schumann shows your artistry and what you’re able to do with the instrument more than a lot of composers”.

Zuber’s own Schumann choice was the Scenes from Childhood. “There are big pieces like the Liszt Sonata that if you do them well it’s very difficult for the jury to kick you out. The Schumann I played is different and shows his tender side and what kind of artist the pianist is. At this level, everybody is technically fantastic; this piece is perfect for demonstrating your creativity”.

“I’m going to Korea for vacation for three weeks,” Kim says, “but I’ll also be preparing for studying in Italy in September”.

Chernov is headed to France: “I’m going to relax for two days, then spend three days preparing for a concert”. He also has a commissioned composition to complete. “A festival in St. Petersburg expects an orchestral score from me, but I’m still keeping them waiting; there’s been no time to prepare it”.

Schimpf will become a tourist for two days before returning to Germany. “This is my first time in the U.S., so I really have to see New York. The only other city I’ve seen beside Cleveland is Washington D.C. — but only the airport”. He was impressed by the security that the U.S. has put into place to keep foreign pianists under scrutiny. “I had to show my fingerprints and my invitation from the Piano Competition, and they took pictures of my retinas — but that’s what you have to go through”. Then after those two days in the Big Apple, it’s back to work. “I have a recital in Berlin on the 14th, and another engagement with an orchestra, and in September, I’ll play your concerto [nodding toward Chernov] in Germany. But I really want to come back and visit more places in the U.S.”.

Zuber has his next few weeks planned in detail. “I have one month to learn the first Liszt Concerto from scratch for Santo Domingo, then I’m going back to Israel to play the Mendelssohn concerto, a Bach two-piano concerto I don’t know and a Brahms concerto arranged for two pianos that I don’t know. And I’m moving into an apartment in Baltimore, so there’s no rest for the weary”.

END_OF_DOCUMENT_TOKEN_TO_BE_REPLACED

Rodgers & Hammerstein’s Cinderella was originally produced for television in 1957 — seven years after the animated Disney film was released — and starred Julie Andrews. According to the Rodgers & Hammerstein website, it was viewed by over 100 million people. END_OF_DOCUMENT_TOKEN_TO_BE_REPLACED

The story line has its origin in an 1855 play and an 1842 farce that Thornton Wilder mined for his 1938 play The Merchant of Yonkers. When that turned out to be a flop, in 1954 Wilder made the crucial decision to re-center the show around the character of the legendary marriage broker Dolly Gallagher Levi and renamed it The Matchmaker. END_OF_DOCUMENT_TOKEN_TO_BE_REPLACED

The Dodero Center for the Performing Arts at the Gilmore Academy in Gates Mills is one feature of an impressive campus. The auditorium is shallow, the stage is deep, and the ensemble played without a shell. Throughout the program, the sound, especially in instruments’ lower registers, tended to disappear. END_OF_DOCUMENT_TOKEN_TO_BE_REPLACED