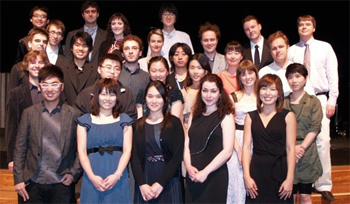 Scarlatti, Chopin and Babajanian were in the cards for Mr. Lu Shen (25, China). He played Scarlatti’s Sonatas in d (K. 213), and E (K.380) with delicate poise and the Sonata in A (K. 209) with well articulated verve. Whatever his original concept was for Chopin’s Polonaise-fantasie, op. 61, the results were generally murky (too much pedal). After playing what must be the Mother of All Trills, he created a huge and largely uncontrolled burst of energy attended by the kind of steely tone that overtakes him when he gets excited. He continued to work hard during Arno Babajanian’s Poem (1966), which begins with a violent outburst, then a tonal miasma, then scamperings, then percussive chords and a sonic boom or two in the bass, ending with a toccata spiked with aggressive chord clusters.

Had you blinked, you might have missed György Kurtág’s tiny …emlékek, kicsi ólomkatonák, subtitled Hommage à Beatrice Stein, the first of two choices by Mr. Daniele Rinaldo (27, Italy). This tiny occasional piece segued into Schumann’s Carnaval, op. 9. Mr. Rinaldo began it grandly and nobly, momentarily got a bit frenetic, but soon settled down to create a colorful, coherent reading of Schumann’s musical impressions, immediately finding the essense of each of its continuous movements, creating good dynamic contrasts, and highlighting moments of poetry both cheerful and sad. Carnaval ended with the same grandeur Mr. Rinaldo had created at the beginning.

Last but hardly least, Ms. Rina Sudo (23, Japan) offered Chopin (the “Sunshine” Etude, op. 10, no. 8) and Beethoven (his last Sonata, op. 111) with a grand finale of Kapustin’s striking Toccatina in G, op.36 (1983). In the Chopin, which she played adroitly, left hand themes were sometimes overpowered by right hand glitter. The first movement of Beethoven’s 32nd Sonata was solemn and mercurial, with ominous trills and booming bass notes; Ms. Sudo brought fine articulation to the fugue subject in the development. The Arietta, which begins the rangy second and final movement, began with spacious pacing and a tonal palette of shades of grey, then everything turned big and jazzy with the next change in affect. The sonata ends with a very long “good-bye” (interrupted by fits of trills) which she managed with skill and patience. Ms. Sudo’s own valedictory — to round two — was something else entirely: Nikolai Girshevich Kapustin’s jazz-infused Toccatina was highly energized, cheerful and engaging, and she sent us into the night (or rather into the lobby to wait out the decision of the jury) with smiles on our faces.