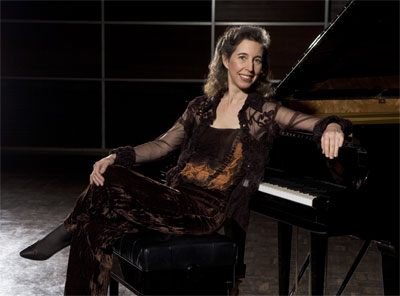 British/Canadian pianist Angela Hewitt is no stranger to Cleveland, having won third prize in the 1979 Casadesus Competition, now the Cleveland International Piano Competition. “I was just a kid,” she said with a laugh during a recent telephone conversation. “But I remember it very well. I remember some of the repertoire I played. I remember many of the competitors. And I remember that we all stayed in the Wade Park Manor — see, I even remember the name!”

Hewitt had already entered competitions as early as 1976, “so the Casadesus wasn’t one of the first by any means.” But she’s very happy to see how CIPC has grown over time. “People do like to follow competitions through the years. They give young musicians lots of opportunities, which is great.”

CIPC will present its former laureate, now one of the world’s leading pianists, in recital in Gartner Auditorium at the Cleveland Museum of Art on Saturday, November 15 at 8:00 pm. Hewitt will play J.S. Bach’s Partita No. 5 in G, Ludwig van Beethoven’s Sonata No. 31 in A-flat, op. 110, and selections from Domenico Scarlatti’s Sonatas and from Isaac Albéniz’s Suite Española, concluding with Franz Liszt’s Après une lecture du Dante.

Asked about her choice of music for her upcoming Cleveland appearance, Angela Hewitt noted that she’s not a pianist who plays the same program for an entire season. She has a large repertoire and many of her programming decisions are mirrored by her current recording projects and other recitals.

“One of those is a program of Scarlatti and Albéniz that I put together for London’s Wigmore Hall, where I’ve played so much of my repertoire. I will begin to record Scarlatti for Hyperion in February.”

Hewitt also enjoys curating a program to reflect the natural affinities between pieces and the connections that can be made between composers. “I wanted something that went well with Scarlatti, and Spanish music really does. Although he was Neapolitan, Scarlatti spent most of his life in Spain. One doesn’t hear these Albéniz pieces very often. And then Albéniz studied with Liszt, so there’s another connection.” Hewitt has just recorded the Liszt, which will be released after Christmas. “It’s also a marvelous finisher for a program.”

And then there’s the Bach and the Beethoven. Bach has always been a specialty for Angela Hewitt, who recently launched a project to play The Art of Fugue complete in two programs in major halls worldwide. “Everybody wants to hear me play some Bach, so I’m resurrecting the fifth partita, which I haven’t played in a while. I like to rediscover one Bach suite every season, and this one is a very joyous piece.”

Beethoven’s opus 110 is also among Angela Hewitt’s recent recording projects. “That CD will be out early next year. It’s a very profound piece and it will show another side to my playing.”

A look at the agenda on her website confirms that Angela Hewitt has a very busy career even beyond her numerous concert appearances. “There’s a lot more going on than what you see on my schedule — practicing, traveling, giving master classes and interviews.”

How does she manage that hectic round of activity? “One has to keep in shape,” she said. “I seem to be able to recover from jetlag a little bit better than I used to. I make sure that I have a lot of massage and stretching. And I follow a special diet. I don’t take caffeine, I try to stay away from dairy and sugar, and I drink very little. So all of that helps.”

I note that Hewitt didn’t mention teaching among her activities. “I don’t have time to do a lot of that in a school. I’ve had many offers but have turned them all down. But I do enjoy teaching master classes when I can fit it into my schedule.”

That schedule has become even more complicated since 2005, when Angela Hewitt launched her own summer music festival in the Umbrian region of Italy. The week-long festival is based at the Castle of the Knights of Malta on the shores of Lake Trasimeno, but last summer, concerts were presented in Assisi, Perugia, Foligno, Spoleto, Panicale and Solomeo as well. “I choose all the artists and do the programming myself — artists I want to work with and repertoire we want to do.

“People come from all over the world to the Trasimeno Music Festival, and most come for the whole week. In addition to hearing the concerts, we take them on tours of Umbria, organize hotels and give them wonderful food. They’re fully taken care of once they get there.

“It’s a lot of work, and had I realized that, I might have thought twice about starting it. But really, the joy of seeing all my friends and fans in one place — and in such a beautiful place — makes it worthwhile. And I can put programs together there that I might not be able to do anywhere else. That’s one of the joys.”

Music director and conductor Daniel Meyer built his playlist around Cleveland themes and scenes. “Exploration CLE” made use of engaging selections from the classical canon and beyond that celebrated “what makes Cleveland so special.” Happily, he and his musicians avoided constructing a visual slide show, choosing to let the music speak for itself. END_OF_DOCUMENT_TOKEN_TO_BE_REPLACED

You could see the relationship at work on a practical level. Repertoire for two players at the same piano requires a certain choreography. There’s just one of each pedal to share, and the hand crossings left and right — which can be so fun to watch a soloist pull off — get more complicated when another person’s involved. At times, Pompa-Baldi drew a hand away from the keyboard and into his body, making room for Friscioni, and at the close of a few delicate phrases, the two were crouched together over the same final notes at one end of the instrument. END_OF_DOCUMENT_TOKEN_TO_BE_REPLACED

The signature sounds of these famous film scores are not so much John Williams’ invention as allusions to other classical pieces. The foreboding half-step from Jaws, growing more and more furious in the cellos and basses, shares something with Dvořák’s “New World” Symphony and Bartok’s Miraculous Mandarin. END_OF_DOCUMENT_TOKEN_TO_BE_REPLACED