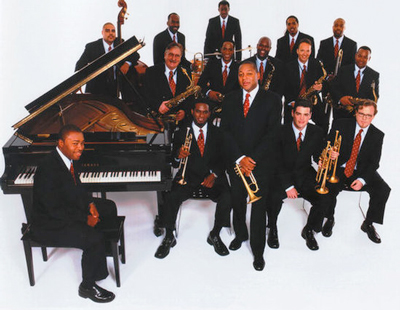 At the relatively young age of 54, Wynton Marsalis has been a prominent star in the jazz world for many decades now. Many facets of his celebrated talent were showcased on Saturday, August 29, when he brought the Jazz at Lincoln Center Orchestra to Blossom both to perform alone, and later to join forces with The Cleveland Orchestra in a performance of his Swing Symphony.

JLCO opened the first half of the concert with a selection of works by Duke Ellington performed in the order in which they were written and recorded. Typical of Marsalis, this gave us a tidy lesson in jazz history.

It’s impossible to separate Marsalis from the Jazz at Lincoln Center Orchestra, as he has been the artistic impetus behind the group since its inception. While it might have been his star power that filled both pavilion and lawn on Saturday night, he was mindful of sharing the spotlight with the many masterful musicians who make up the ensemble. Seated in the trumpet section, he spoke in a comfortable, low-key manner, introducing each work and sharing anecdotes from his position in the last row of the band.

The first piece, from the 1920s, was The Mooch. The band exerted adept control over a slow tempo in this opening arrangement, underscoring a historically correct style and demonstrating the musical maturity of the group. Representing the big band music of the 30s, Braggin’ in Brass showed off the impressive trombone section playing rapid passages in tight harmony.

Mood Indigo, a work from the 30s with a more sultry and soulful style, was performed by a trio of trumpet, trombone, and clarinet, standing behind a microphone on stage left, accompanied only by the rhythm section. That was followed by the 1940s Concerto for Cootie, written to showcase Duke Ellington’s trumpet player, Cootie Williams, who was described by Marsalis as the “master of the plunger and growl.” Based on the tune Do Nothing Till You Hear From Me, the trumpet solo was brilliantly played by Ryan Kisor, who carefully shaped each note with a wide diversity of sounds.

Moving into Ellington’s later period with the 1960s tune “Amad,” written with Billy Strayhorn and featured on the album Far East Suite, the music became energized and wild, and filled with exotic spices and harmonies. It was also the first point in the program where we heard the typical big band saxophone section of two altos, two tenors, and a baritone playing tightly together — the music from earlier eras relied heavily on solo and duo clarinets.

The next chart was written in 1970 for the first New Orleans Jazz and Heritage Festival. The audience groaned along with Marsalis when he said that his father gave him the option to go to that first festival, but he chose to stay home. “Never give your kids the option; just take them and let them complain,” he said, to chuckles and applause.

Portrait of Wellman Braud was written as a tribute to a bass player from New Orleans. The piece featured bassist Carlos Henriquez in a strong, harmonically interesting and melodically well-played solo. An outstanding bassist, his crackerjack playing throughout the evening was matched by the laudable drumming of Ali Jackson. Together with pianist Dan Nimmer, they established a taut and unfaltering rhythm section.

“Ready, Go!” from Toot Suite, closed the first half of the program, featuring Cleveland saxophonist Walter Blanding, who had soloed as a clarinetist in a more introverted style on Mood Indigo earlier in the evening. With tenor sax in hand for this one, he showed us his extroverted side. His blazing solo featured impressive scale and pattern work, and displayed wildly extended harmonies and range. This Cleveland guy can swing!

For the second half of the evening, The Cleveland Orchestra joined the Jazz at Lincoln Center Orchestra in Marsalis’s Swing Symphony (Symphony No. 3). Together, they filled the stage to overflowing. There was plenty of engaging material for both groups in this thick and lengthy work, and conductor William Eddins led the union in a zesty performance.

The JLCO premiered the work in 2010 with Simon Rattle and the Berlin Philharmonic, and have since played it with the London Symphony and New York and Los Angeles Philharmonics. Since its inception, the Jazz at Lincoln Center Orchestra has been on a mission to promote jazz as high art. Marsalis’s composition, which juxtaposes jazz and classical styles, beautifully illustrates that determination.

Well-written program notes based on composer James Oliverio’s interview with Marsalis gave us insight into the evolution of the swing rhythm as it unfolds in the work. Seven movements took us through many decades including ragtime, the Charleston, the tango, “Kansas City Swing”, bebop, a mambo, and Third Stream.

After hearing only the jazz orchestra on the first half, it was interesting to contrast the sound of the classical orchestra, which often seemed to float without the constant, driving percussion of the big band beneath it. The writing in the earlier movements reflects a thinner, sparser use of percussion than in the later movements, when the orchestral percussion section joins in to provide lots of energetic rhythms and walls of percussive sound. The work highlighted not just swing’s evolution, but the transformation of Latin rhythms over time as well.

The large string section added a marvelous lushness, particularly in the later movements, when swing had become more sophisticated. Marsalis’s use of the symphony orchestra was at its creative best in the final two movements, where the more mature nature of swing allowed for more finesse in the orchestration.

He blended both groups seamlessly, with instrumental solo lines that frequently ran through one group and into the other. The Cleveland Orchestra musicians did an admirable job with the language of swing, often making it hard to distinguish which group of instrumentalists we were listening to.

Writing a composition based on the evolution of swing involves a self-imposed mold that can lead to a certain sameness of style, but the creative exuberance in this lively romp through swing’s history brought the audience to its feet. After four curtain calls, we were treated to a slow blues tune and a well-deserved solo encore from the trumpet of Wynton Marsalis.

END_OF_DOCUMENT_TOKEN_TO_BE_REPLACED

Rodgers & Hammerstein’s Cinderella was originally produced for television in 1957 — seven years after the animated Disney film was released — and starred Julie Andrews. According to the Rodgers & Hammerstein website, it was viewed by over 100 million people. END_OF_DOCUMENT_TOKEN_TO_BE_REPLACED

The story line has its origin in an 1855 play and an 1842 farce that Thornton Wilder mined for his 1938 play The Merchant of Yonkers. When that turned out to be a flop, in 1954 Wilder made the crucial decision to re-center the show around the character of the legendary marriage broker Dolly Gallagher Levi and renamed it The Matchmaker. END_OF_DOCUMENT_TOKEN_TO_BE_REPLACED

The Dodero Center for the Performing Arts at the Gilmore Academy in Gates Mills is one feature of an impressive campus. The auditorium is shallow, the stage is deep, and the ensemble played without a shell. Throughout the program, the sound, especially in instruments’ lower registers, tended to disappear. END_OF_DOCUMENT_TOKEN_TO_BE_REPLACED