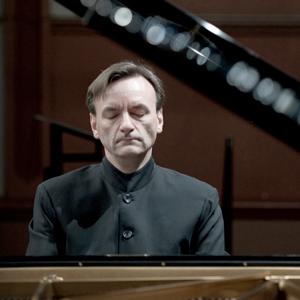 Antonín Dvořák would surely be pleased to know that British pianist Stephen Hough is a passionate advocate for his not-so-often-played piano concerto. His performance of the work with The Cleveland Orchestra under guest conductor Alan Gilbert last weekend at Severance Hall was masterful.

Hough, who seems to succeed brilliantly at everything he takes on — performing, writing, composing, painting — has made peace both with the awkwardnesses of Dvořák’s keyboard writing and the composer’s tendency to get lost in his own woods in the first movement of the piece. On Thursday, March 3, seemingly engrossed in its every note, Hough sat intently watching the orchestra during the introduction, then entered into clear, cheerful conversations with the woodwinds when his hands touched the keyboard.

An impressively large climax in the opening Allegro led to a cadenza full of trills, calling to mind Hough’s last visit to Blossom in July, 2014. Lightning struck and the lights went out for a long moment while the pianist was engaged in a similar activity during Liszt’s first concerto. Unfazed, Hough just kept trilling until the orchestra regrouped.

But back to Severance. Lovely horn and clarinet solos by Hans Klebsch and Daniel McKelway adorned the slow movement with its eventful changes of mood and tempo. Then Hough launched vivaciously into the bouncy, rhythmic tune of the finale, which comes around again and again after lyrical interludes. His full, swooping keyboard gestures brought the concerto to a thrilling conclusion.

Throughout the piece, Hough invested Dvořák’s piano writing with a sense of purpose and direction, even when the soloist just seems to be playing filigree against more important material in the orchestra.

Responding to a warm ovation, Hough graciously acknowledged Gilbert and his orchestral colleagues who had given him such robust support, then delighted the mid-sized audience with a little Dvořák bon-bon, the Humoresque in G-flat from Opus 101.

Alan Gilbert opened the concert with Robert Schumann’s Manfred Overture, conducting without baton or score but with plenty of podium choreography. Afterward, a patron in the row behind exclaimed, “He certainly puts himself into it.” Perhaps, but Gilbert didn’t generate quite the level of wild, romantic drama Schumann seems to have had in mind.

The evening ended with a lively performance of Carl Nielsen’s Symphony No. 4, nicknamed “The Inextinguishable” by the composer himself for its undauntable spirit. Brash opening gestures led to a warmer, more textured passage, then turned brash again.

After a pause, the last three movements are continuous, beginning with a charming woodwind chorale, and a striking moment when unison violins play over pizzicati and timpani. An intense episode with the full string section dissipates into a lovely passage for string quartet with flute. Then Nielsen builds up a fugue from the bottom, beginning with the cellos, then violas, second and first violins, and finally involving the full orchestra.

A lyrical diversion features an oboe solo (Frank Rosenwein) over a haze of strings. Later, psychotic violin gestures infect the string section, leading to the symphony’s famous dueling timpani (here played by the redoubtable Paul Yancich and Tom Freer), and climaxes with whooping horns. But the symphony, being inextinguishable, isn’t over yet. Another calm interlude leads to more timpani volleys and a triumphant brass chorale taken up by the full orchestra, a splendid conclusion to a highly original work in which The Cleveland Orchestra shone with burnished brilliance.

Jackson began the program with a recitation of Langston Hughes’ poem “Helen Keller” — the first of five poems by Hughes that served as interludes between each piece on the first half. END_OF_DOCUMENT_TOKEN_TO_BE_REPLACED

Pianos with pins and tape on strings, a bass drum and tam tam, crotales, Almglocken, and vibes. Microphones were hooked up all around the instruments. The feed was sent to speakers around the room. Lighting designer Nicholas Houfek hung incandescent globes over the arrangement of instruments from thin black wires stretching across the beams. END_OF_DOCUMENT_TOKEN_TO_BE_REPLACED

From the podium, Elim Chan set an ambitious tone for the evening. The rising star conductor, here in her Cleveland Orchestra debut, has a commanding style, and every twist and turn in Saturday’s performance tracked closely with her baton. END_OF_DOCUMENT_TOKEN_TO_BE_REPLACED