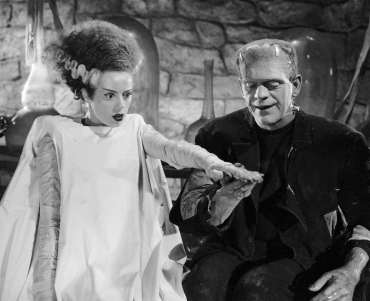 Bride of Frankenstein is the sequel to Universal Pictures’ 1931 silent film Frankenstein, further developing a subplot in Mary Shelley’s 1818 gothic novel. As legend has it, Waxman, who had fled Europe in the wake of Hitler and ended up in Hollywood, met Whales at a party where the director proposed that he write a score for the sequel.

Waxman later moved over to MGM, where he wrote music for Sunset Boulevard, Stalag 17, Rear Window, Peyton Place, The Nun’s Story, and Taras Bulba. In addition to his film scores, Franz Waxman composed such concert works as The Song of Terezin, based on poetry written by children at Theresienstadt during WWII.

Richard Kaufman has been involved in the Hollywood film industry for decades, having supervised music for the MGM studio for many years and played violin in numerous studio sessions. He said that in the early days of sound films, studios would use previously recorded music, but Waxman did something special with the score to Bride.

“It was one of Waxman’s very first scores,” Kaufman said in a telephone conversation from his home in Los Angeles, “and the music really adds depth to the story. Without it, you’d just have this big hulking monster going after a woman with a crazy hairdo. It’s extremely campy, but the score adds legitimacy. Waxman played Bride of Frankenstein as a very serious drama, and when you see the monster or his bride, you don’t laugh because you’re hearing music that legitimizes their feelings and their existence. I knew Elmer Bernstein, the great film composer who wrote the score to The Magnificent Seven, The Ten Commandments, and To Kill a Mockingbird — but who also wrote scores to Animal House, Airplane, and Ghostbusters. He used to say that the funnier a film is, the more serious the music has to be.”

Kaufman added that he came to that realization later in his career. “When I was growing up, I never thought I would analyze Bride that way. But it’s also true of Psycho. It’s a terrible movie until you add the music,” he said. “This woman has an affair, she steals $30,000, she gets into a car and drives to a motel, this crazy kid rents her a room while he’s keeping his dead mother in a rocking chair, then he kills the woman, he kills a detective, and in the end he’s hauled off to the looney bin. That’s Psycho, but when you add Bernard Herrmann’s music, all of a sudden you’re gripped by the psychodrama. He takes you inside the minds of these people — which is at times like going into a very dark funhouse — and in a lot of ways, that’s what Franz Waxman does in Bride.” 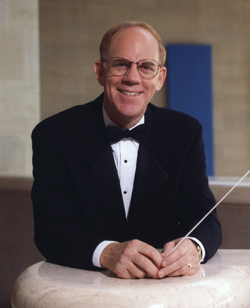 Kaufman marvels at the creativity composers unleash on movie music. “When they sit there watching a film, looking at a blank sheet of music paper, who knows what’s going through their heads? How did John Williams come up with those two notes in Jaws? As a studio violinist who played on that film, I think it’s amazing how composers can elicit terror from the audience in such a subtle way,” he said. “Franz Waxman does a similar thing in Bride, using timpani to represent the heartbeat in the last quarter of the film.”

Having conducted Bride of Frankenstein with such orchestras as the Chicago Symphony and the Rotterdam Philharmonic (“we’ve frightened people on both sides of the Atlantic”), Kaufman thinks that putting a live symphony orchestra together with the film greatly enhances the experience for the audience. “One of the great things about doing a classic like Bride, or Casablanca, or Psycho in concert is that in the early days of film, they didn’t have great soundtracks. Now, in a live concert, everything comes to life and you hear things you’ve never heard before.”

While it might appear to the audience that Kaufman’s primary task is syncing the music to the film, he’s actually thinking deeper. “I see my job as recreating the score, so that if Franz Waxman were in the audience, he would be smiling and saying, ‘That’s exactly what I wrote, and why I wrote it.’ The synchronization is very important, but my job is to inspire the orchestra to reach down into the music and capture everything that Waxman was going for originally.”

That also applies to moments in the film when there’s no music at all. “Bronisław Kaper once said that the loudest sound in a motion picture is silence,” Kaufman noted. “There are important silences in Waxman’s score, and I need to make sure we capture his intention and its emotional impact during the performance.”

About that syncing: Kaufman will be watching a clock on the podium with a sweep second-hand. “Everything is based on the time when something is supposed to be happening. If at 42.5 seconds the monster gets up and grunts, I need to be at that point in the music. I’m chasing the clock, making sure everything goes at the right tempo.” He’ll also be paying attention to what happens on the big screen. “There’s a ‘heart meter’ that determines when the timpani is supposed to play faster or slower, and I have to follow that visually. It’s complicated, but to get ready for something like this, I always study the film for eight or ten months so I know everything that’s happening.”

How will Kaufman prepare the Orchestra for Bride of Frankenstein? “I’ll rehearse sections of the music, then we’ll run through the score in order. There are dialogue scenes without music, so we’ll skip from section to section so the players don’t have to sit around listening to Boris Karloff grunt. Musicians want to be playing, and I always try to use rehearsal time wisely.”

Richard Kaufman has been a frequent visitor to The Cleveland Orchestra, his most recent appearances having been a pair of Blossom Festival concerts devoted to the film music of John Williams last September. “I pinch myself whenever I get to conduct this orchestra,” he said. “It’s such an honor and they’re such nice people. It just makes the whole thing a lot of fun. A big goal of mine is that they’ll have a good time — that they’ll enjoy what they’re doing and feel there’s a musical validity to spending their time and their immense talents creating this concert.”

Bianca Ciubancan (16, Chicago, Ill) began the afternoon session with Jessie Montgomery’s Rhapsody No. 1 for solo violin. Playing with a warm, rich sound, Ciubancan brought a thoughtful, intimate approach to the work, highlighting each of its distinct episodes. END_OF_DOCUMENT_TOKEN_TO_BE_REPLACED

END_OF_DOCUMENT_TOKEN_TO_BE_REPLACED

Franz Schmidt’s Symphony No. 4 showcased the ensemble, under guest conductor Jonathan Berman, in the standard conventions of a not-so-standard piece. But at the start of the program, the musicians were equal partners to pianist Cédric Tiberghien, whose playing could be as bold as the full orchestra or as intimate as any instrumental solo. END_OF_DOCUMENT_TOKEN_TO_BE_REPLACED