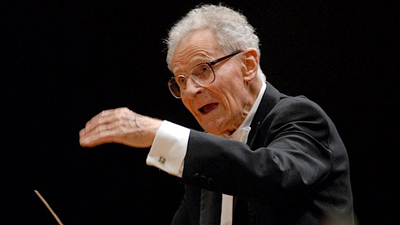 On August 7th, the second concert in this season’s Summers@Severance series marked guest conductor Stanislaw Skrowaczewski’s return to Cleveland. Drinks on Severance Hall’s lovely Front Terrace in the waning afternoon sun provided an excellent prelude to a fine musical event, of which Dmitri Shostakovich’s Symphony No. 5 was the centerpiece. Skrowaczewski, now 91 years old, knew the composer personally, and on Friday evening he shepherded the Orchestra through a stunning performance of the work.

The first movement opens slowly, its dotted rhythms perhaps alluding to the short introductory sections of many Classical symphonies. However, the slow tempo continues much longer than in Classical pieces, so that it seems its own raison d’être. Here emphasis on the low-register strings and woodwinds provided a dark, austere mood. In contrast, the high-register violins led the parlando-style second theme. Beautiful oboe and bassoon solos and an active cello section introduced more disjunct, powerful lines.

The horns introduce a third theme: an ominous march-like idea that pushes forward to a faster tempo and more developmental passages. At the climax, the original two themes return, the first more intensely, the second more lyrically, with solo flute and horn, delicate sounds from the harp, and interchanges among oboe, bassoon, clarinet, cellos — who played beautifully — and the concertmaster, whose solo was gorgeous. The section moved to a serene close.

The “Allegretto” alleviates the darkness with a carefree, waltz-like scherzo, its inventiveness of color suggestive of Mahler. Unisons in the strings, lots of grace notes, a wonderfully played bassoon solo, and forceful horns enlivened the flow. The trio featured magnificent solos by the concertmaster and flutist.

The third movement, “Largo,” uses no brass, divides the violins into groupings of three (rather than the usual two), and achieves the most expressive moments in the entire work. The first movement’s march theme mutates here into a heart-rending song of grief, while another tune seems to approach Russian Orthodox funeral music. (Shostakovich’s friend and supporter Mikhail Tukhachevsky, the former Soviet Marshal, was executed under order of the Soviet Supreme Court in June of 1937, while Shostakovich was composing the symphony.) Many who attended the premiere reportedly wept for fallen friends and relatives.

The movement’s performance included many beautiful moments, but most memorable was the flute solo accompanied by simple octaves in the two harps. Flute duos, the strong cello section, and intense playing from the strings and woodwinds culminated in the final major chord, a ray of hope.

The finale, “Allegro non troppo,” provided release with its light, happy march theme. The wonderful Cleveland trumpets, along with the rest of the brass, finally got to show their full talent. The extended development stopped in its tracks to the sound of intense fortissimo chords, and the ensuing slower section featured a gorgeously expressive horn solo, which quotes the composer’s own song “Rebirth” (Op. 46, No.1), penned just before the Fifth Symphony. (The song’s text, by poet Alexander Pushkin, states, “So do delusions vanish from my wearied soul, and visions arise within it of pure primeval days.”)

Timpani and snare drum interrupt this section’s wistful musings and lead to the return of the initial march theme, now far gentler and at half the original speed. With fine contrapuntal treatment, the Orchestra reached a powerful climax on the extended D-major chord, bringing the striking symphony to a close.

The concert opened with Mozart’s Overture to Don Giovanni. The ominous opening chords foreshadow the opera’s supernatural ending, in which the statue of the Commendatore comes to life and offers Giovanni a final chance to repent. Such a thematic connection, rare in Classical-era music, was Mozart’s — and his librettist Lorenzo Da Ponte’s — way of suggesting Giovanni’s inevitable demise.

Unison scalar passages bolster the tension, and musical ideas intermingle until two themes in an exuberant allegro take over. After one more ominous interruption, the Orchestra charged to the overture’s conclusion in a performance both spirited and delightfully crisp.