Finnish guest conductor Susanna Mälkki and American pianist Jeremy Denk both made their Cleveland Orchestra debuts on Thursday evening, April 23 at Severance Hall in an impressive program of works by Jean Sibelius, Béla Bartók and Igor Stravinsky. The chemistry between the two and the Orchestra produced a precise but risky journey through Bartók’s third piano concerto that was edge-of-your-seats thrilling.

Denk, an Oberlin graduate, is a brainy daredevil of a pianist who has taken on such challenges as performing all the Ligeti Études and Bach’s Goldberg Variations on the same Carnegie Hall program.

The Bartók third concerto isn’t quite that kind of trial by fire, but it boasts rhythmic complexities in its faster sections that can easily come undone. Even at Denk’s brisk tempos, the back-and-forth chatter between soloist, conductor and orchestra was nearly perfect, and at times, Denk reveled in those interchanges so much that he seemed to be making them up on the spot. Let’s toss a little motif at the orchestra. Ah, they tossed it right back. OK, here’s a longer motif. Wow, back to me again.

Much of the Bartók, written in 1945 as an income-producing vehicle for the composer’s wife, is placid and chorale-like. Here, Jeremy Denk had the time to set up beautifully voiced chords. Otherwise, the piece offers a variety of folk-infused material in various guises, which Denk, Mälkki and the Orchestra dispatched with wit, humor and lyricism.

The audience loved it, rewarding Denk with multiple callbacks. The pianist responded with an encore: the thirteenth of Bach’s Goldberg Variations, an expressive aria with a sinuously ornate right-hand part in which Denk once again combined the emotional with the cerebral to excellent effect. 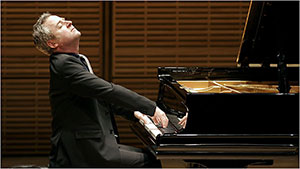 Mälkki began the evening with Sibelius’s The Oceanides, a ten-minute tone poem that invokes the Greek spirits of the waves, and was premiered at the Norfolk Festival in Connecticut in 1914 during the composer’s only visit to America. The spirits are suggested by a pair of flutes, limpidly played by Marisela Seger and Saeran St. Christopher, surrounded by wispy, watery images from the orchestra in the form of tremolos in the strings, glissandos on a pair of harps, and pings from the glockenspiel.

Susanna Mälkki, tall and athletic on the podium, led a crisp but relaxed performance of Sibelius’s only work based on Greek rather than Finnish mythology. It’s interesting to compare different composers’ musical images of the relentless churning of the sea. Sibelius’s waves are not unlike Ravel’s or Debussy’s in concept, but the hues that The Oceanides invoke are distinctly Nordic in flavor — not derived from the color palette of a French impressionist.

Stravinsky’s complete Pétrouchka ballet music (officially subtitled “Burleske in Four Scenes”) occupied the second half of the program. Presented in its 1947 reworking, probably undertaken by the composer more to extend his copyright than to revise the piece, the work tells the bizarre story of a love triangle among puppets that gets played out against a Shrovetide Fair in St. Petersburg.

The four episodes in the tale of the half-human, half-puppet, Pétrouchka, are set off by drumrolls and told through a succession of musical styles. During the story, the other characters in the triangle, the Ballerina and the Moor, share the stage with such carnival staples as a performing bear and drunken revelers.

Mälkki kept the story moving at a brisk pace. Brava to pianist Joela Jones for tossing off the full-hand, parallel chords that represent Pétrouchka with such nimble flair at that speed. Principal flute Joshua Smith, principal trumpet Michael Sachs and contrabassoonist Jonathan Sherwin — to name only a few — made superb solo contributions to Stravinsky’s tale.

Sometimes the purely orchestral version of Pétrouchka seems to cry out for dancers to explain the music for some missing sight gags. Mälkki paced the piece so cannily — and brought out its earthy humor so defty — that the imagination could supply any missing visual elements.