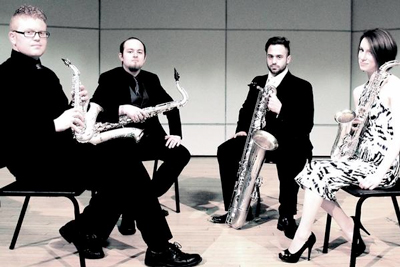 When the Belgian instrument maker Adolph Sax invented the instrument that bears his name in 1840, it’s unlikely that he imagined the many ways the saxophone would be employed by musicians of differing musical genres. On Sunday, July 19 at the Bop Stop, the excellent Decho Ensemble (Jacob Swanson, soprano sax, Sarah Marchitelli, alto sax, Nicholas Child, tenor sax, Jared Yackiw, baritone sax) played a concert of music on vintage instruments that highlighted the saxophone’s classical origins, as well as celebrated the 200th anniversary of the birth of Adolph Sax.

During an interview with this publication, Decho Ensemble co-founder Jacob Swanson said that part of the group’s mission is to “broaden the saxophone in classical music.” One way the ensemble does that is to “return to the original sound, which has a more warm, string-like quality,” and they use vintage equipment to achieve that sound. That warmer sound was noticeable from the beginning of the concert, which opened with Swanson’s arrangement of Bach’s well-known “little” Fugue in G minor.

Belgian-born composer Jean-Baptiste Singelée’s Premier Quatour, composed in 1857, is the first composition ever written for saxophone quartet, and what a gem it is. Throughout its five movements the Decho Ensemble produced a beautifully blended sound and pristine balances, and played with flawless, nimble technique. The quartet especially invigorated the third movement, “Allegro vivace.” The “Allegretto” was a rousing conclusion. As the piece is really a mini-concerto for soprano sax, kudos to Swanson, who tossed off the work’s many technical passages with aplomb.

Rochester-based composer Dan Knorr’s Saxophone Quartet (2012) is a substantial five-movement work that fully explores the capabilities of the four instruments. Knorr (born in 1990), who was present at the concert, introduced the piece by saying it was written as his undergraduate thesis, and was influenced by the anxiety and growth that someone in their early twenties experiences. A high-pitched, screaming soprano sax added the right amount of musical tension during the first movement, “Bright.” The use of slap tonguing brought comical nuance to the second movement, “Airy,” and a beautiful melodic line in the baritone opened the third movement, “Nostalgic.” A moderately slow march was titled “Uncomfortably Still,” and the quasi-minimalist “Relentless” ended the work the way it began — only this time the scream was performed by all four players. Dan Knorr has a lot to say as a composer, and it will be interesting to follow his career as he continues to hone his skills.

Following a tribute to the recently-passed jazz lover and vintage saxophone collector John Geers, the second half of the program continued with American composer Caryl Florio’s Quartette. Composed in 1879, this single-movement work represents another example of the incredible music that was written for the saxophone quartet at a time when the ensemble was still relatively new. The Decho Ensemble relished in every imaginative twist and turn the piece has to offer.

The program concluded with a performance of Philip Glass’s own arrangement for quartet of his Concerto for Saxophone Quartet. I’ve had the privilege of hearing this prodigious piece performed with chamber orchestra, but hearing how the composer distilled the orchestral part into the four instruments was extraordinary. And the performance was outstanding. All four Decho Ensemble members seized every opportunity to shine during the work’s four movements. The quartet played the concerto’s intricate ensemble passages and complicated meter changes with impressive flair, and from a single musical mind.

Congratulations also need to be given to the management of the Bop Stop as the venue enters its second year as the West Side performance satellite of the Music Settlement. It is a great place to hear music.

Jackson began the program with a recitation of Langston Hughes’ poem “Helen Keller” — the first of five poems by Hughes that served as interludes between each piece on the first half. END_OF_DOCUMENT_TOKEN_TO_BE_REPLACED

Pianos with pins and tape on strings, a bass drum and tam tam, crotales, Almglocken, and vibes. Microphones were hooked up all around the instruments. The feed was sent to speakers around the room. Lighting designer Nicholas Houfek hung incandescent globes over the arrangement of instruments from thin black wires stretching across the beams. END_OF_DOCUMENT_TOKEN_TO_BE_REPLACED

From the podium, Elim Chan set an ambitious tone for the evening. The rising star conductor, here in her Cleveland Orchestra debut, has a commanding style, and every twist and turn in Saturday’s performance tracked closely with her baton. END_OF_DOCUMENT_TOKEN_TO_BE_REPLACED