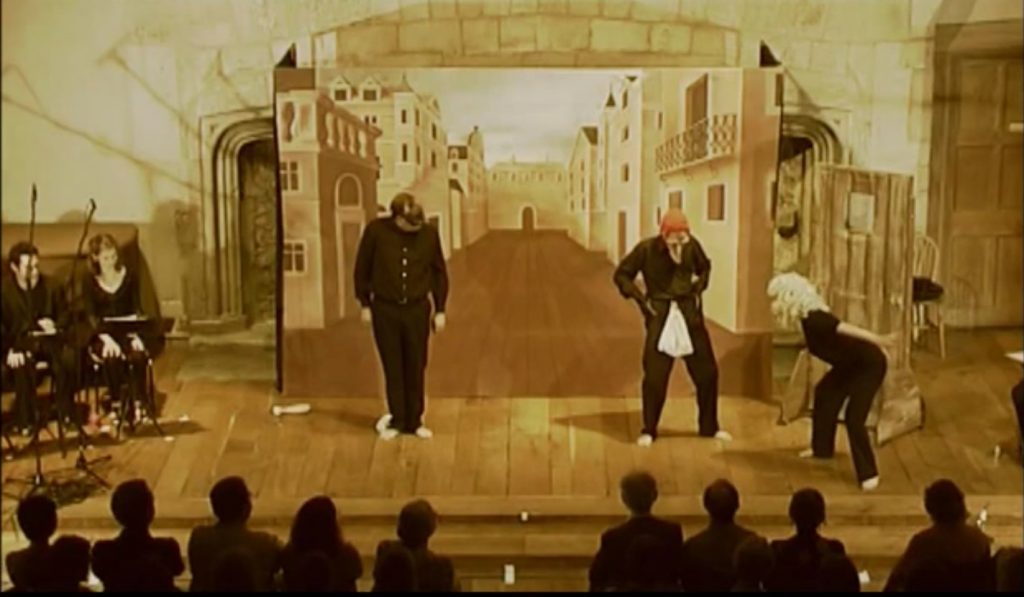 CityMusic Cleveland and the CIM Orchestra both go online tonight, the former with chamber music by Villa-Lobos, Rebecca Clarke, Mozart, and Schumann, the latter with music by Peter Warlock and Grieg. And the Jupiter Quartet continues its series from the Krannert Center in Urbana-Champaign with works by Mendelssohn, Haydn, and Dan Visconti.

One of the few items to pop up on a search for events that took place on this day in classical music history was the death of Italian madrigalist Orazio Vecchi in 1605 at the age of 54 in Modena. That got me thinking about alternative ways of observing some historic milestones.

Normally, we recommend recordings as tributes to those who have begun and ended careers on the date in question, but Vecchi suggests a more interactive approach. How about a madrigal sing-along?

Gather whatever voices live in your pod, click here, and have go at Vecchi’s alluring little canzonetta Fa una canzone. The performance comes with a scrolling score, and here’s a translation.

Write a song with no black notes
If you ever wanted my favour
REFRAIN: Write it so that it will bring me to sleep
Make it end sweetly, sweetly.

Don’t put any harshness into it
Because my ears are not used to that…
Don’t write numbers, or counterpoint
This is my main design…

If you’re ready to move to something more challenging, Vecchi’s 1597 L’amfiparnaso — one of his full-length comedy entertainments made entirely out of madrigals — might be just the thing. A modern score is downloadable for free from the Petrucci Project, and a 2003 performance by I Fagiolini at England’s Darlington Hall (photo above), directed by Robert Hollingworth and narrated by Simon Callow is available here. It’s well worth an hour of your time, whether you choose to sing in with the cast or not.

Come to think of it, why not plan a madrigal sing for a few musically inclined friends once the health authorities signal all clear? You’ll find a lot of material on the Petrucci site, or you can search out copies of The A Cappella Singer, that collection of slightly Bowdlerized madrigals and part songs published by E.C. Schirmer in the 1930s, which was the bible for my high school madrigal group.

Or dialing things down slightly, host an evening of catches and rounds like I experienced in London back in the 70s when I swapped churches with an organist in Kensington and was invited to the monthly meeting of the Aldwych Catch Society. Its members gathered in a private home on a Sunday evening with their own manuscript collections of tunes and sang them lustily all evening — with a break for supper. The newly appointed 11 year-old Head Chorister at Chester Cathedral was inducted that evening and beamed when presented with his own blank book to fill up.

But there is one more historical event to mention: the birth of Hungarian composer Gyorgy Kurtág in Romania on February 19, 1926. Kurtág is often compared to Anton Webern for his proclivity for writing brief, epigrammatic pieces, like the 40 movements of his Kafka-Fragments and his highly miniaturized piano pieces.

In 2017, ChamberFest Cleveland violinists Alexei Kenney and Yura Lee and joined soprano Laura Eberwein in Kurtág’s “Like a Pathway in Autumn” from the Kafka Fragments (film by Kasumi), and pianists Zoltán Fejérvári and Roman Rabinovich performed selections from Játékok (“Games”).

Banks carried four different saxophones with him to the audience-less West Shore Unitarian Universalist Church, along with two classic pieces he had transcribed and three powerful new works — one of them his own. He explained at the start that the new pieces would be receiving “workshop performances” as he prepares them for his Young Concert Artists (YCA) debut recital at New York’s Merkin Hall on March 10, when he will again be joined by Bjerken. END_OF_DOCUMENT_TOKEN_TO_BE_REPLACED

Episode 5 is subtitled “Musical Patterns,” a nod to the fact that three of the four works are examples of “minimalism,” or maybe more precisely, “repetitive music.” END_OF_DOCUMENT_TOKEN_TO_BE_REPLACED

END_OF_DOCUMENT_TOKEN_TO_BE_REPLACED

Artistic director Timothy Beyer set the tone for the opening work by Jeremy Rapaport-Stein, appearing like the floating head of the Wizard of Oz in a quasi-film noir introduction. Beset with a parched throat, he turned the emcee job over to a ventriloquist’s dummy, who carried on in time-honored vaudeville style while Beyer drank a glass of water. END_OF_DOCUMENT_TOKEN_TO_BE_REPLACED