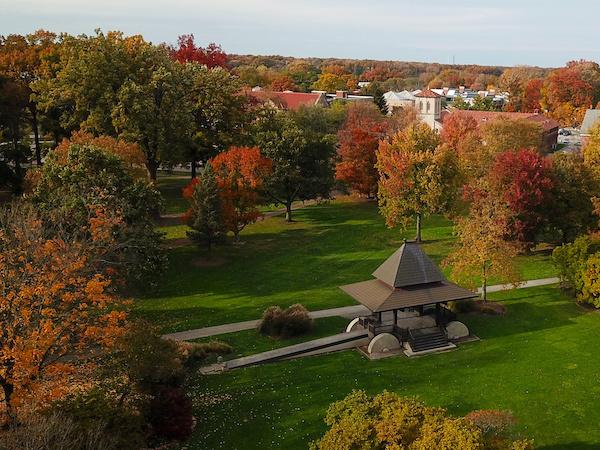 Oberlin Conservatory will open its concert season with a performance of John Luther Adams’ Sila that deploys more than 50 brass players and percussionists all over Tappan Square. The 6:30 pm event is free, masks required, and physical distancing is built into the plan.

And at 12:15 noon today, University Circle carillonneur George Leggiero will ascend to his office in the McGaffin Tower to play Baroque and Baroque-inspired music on the 47-bell carillon. It’s free, and you can listen from various greenswards or remain in your car (honking = applause). Details of both events here.

Lisa Wong, director of choruses at Severance Hall, “reflects on the healing power of John Adams’s On the Transmigration of Souls after 9-11 and the human voice as medicine for the soul” in the just-released second episode of the second season of the podcast series “On a Personal Note.” Watch here.

Estonian-born composer Arvo Pärt was born on this date in 1935. One of the truly original voices of the 20th century, Pärt invented what he called the tintinnabuli style, a minimalist approach influenced by chant.

Frequent ChamberFest Cleveland violinist Alexi Kenney joined his colleague Stefan Jackiw and Boston’s A Far Cry chamber orchestra in a live performance of “Silentium,” the second movement of Pärt’s Tabula Rasa, in Jordan Hall in 2017. Watch here. And listen to the Estonian Chamber Choir sing Pärt’s 1989 Magnificat under the direction of Paul Hillier.

French composer, organist, and harpsichordist François Couperin “Le Grand” died in Paris on this date in 1733. QinYing Tang included the 18th Ordre from his Troisième livre de pièces de clavecin on her doctoral recital at the Cleveland Institute of Music in April, 2015. And in the same month, Les Délices played his La Sultanne on its program in Herr Chapel at Plymouth Church in Shaker Heights.

Joining a long list of arrangers, Parker Ramsay has now transcribed the Variations for the modern pedal harp, an instrument for which he holds a master’s degree from Juilliard, in addition to a degree in history from Cambridge University, plus a master’s in historical performance (organ and harpsichord) and an artist diploma (organ) from Oberlin. END_OF_DOCUMENT_TOKEN_TO_BE_REPLACED

As organizations gingerly take steps to open up for business, it’s refreshing to have new content to listen to and write about after a solid six months of archival footage. END_OF_DOCUMENT_TOKEN_TO_BE_REPLACED

END_OF_DOCUMENT_TOKEN_TO_BE_REPLACED

Over the past few years, Brian Giebler has visited Northeast Ohio in settings both orchestral and choral, and with repertoire as diverse as Stravinsky, Bach, and the local premiere of a new work. In his impressive solo recording debut a lad’s love, released on Bridge Records, the New York City-based tenor turns his focus to British songs from the first half of the 20th century — a mix of cycles and individual works — and tops off the playlist with a touch of the modern. END_OF_DOCUMENT_TOKEN_TO_BE_REPLACED

To steal a phrase from the third-century Greek philosopher Sextus Empiricus, the mills of the gods grind slowly, but they grind exceedingly fine. The same goes for Deutsche Grammophon. It’s been a dozen years since they were recorded in Hamburg in 2009, but the German company has now issued fifteen Rachmaninoff piano pieces magnificently and poetically played by Sergei Babayan. END_OF_DOCUMENT_TOKEN_TO_BE_REPLACED

END_OF_DOCUMENT_TOKEN_TO_BE_REPLACED

After considering all its options, Cleveland’s period ensemble Les Délices decided to fully embrace the idea of creating pre-recorded “shows” in the place of live, in-person performances this season. END_OF_DOCUMENT_TOKEN_TO_BE_REPLACED