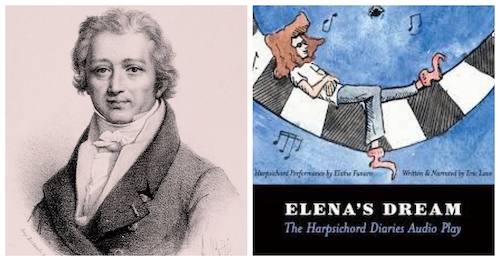 Louis Spohr (1784) and Herbert von Karajan (1908) might be the biggest birthdays to celebrate today. But another historical figure — French instrument maker Sébastien Érard, born on this date in 1752 in Strasbourg — offers up the possibility of a tantalizing tangent, and who can say no to that?

First, the background, which is interesting in itself: Érard is famous for making several important innovations for the harp and the piano. Those included a double escapement mechanism allowing for faster repetition of notes on the piano, and a double-action pedal harp which made it easier to change keys. In the first year following that popular advancement — a mechanism still used by modern harp manufacturers — he reportedly made £25,000 (in one conversion, over two million dollars by today’s standards).

A few other interesting tidbits: Érard was the first instrument maker in Paris to fit pedals on the piano, and not just the usual pedals we have today. His instruments (like others in Europe) had several, including a bassoon pedal, which brought leather into contact with the strings to create a buzzing sound. Finally, among the musicians who owned Érard pianos were Beethoven, Chopin, Haydn, Mendelssohn, Wagner, Verdi, Ravel, and Liszt — who was for a time sponsored by Érard.

Now, onto that tasty tangent: the name Érard pops up in a very charming audio play, Elena’s Dream, in which the character of Elena travels back in time, meeting harpsichords — talking harpsichords — from various eras.

In the late 18th century, she encounters the eccentric Thomas Taskin (named after another instrument maker, Pascal Taskin). But moving into the 19th century, she finds that her harpsichord-friend Taskin has been left for dead, tossed into a storage closet at the Paris Conservatory. Harpsichords have been set aside for the new “88-keyed monster” (Thomas Taskin’s words), the piano.

That is, until 1892, when the closet door opens, and Taskin finds himself carried to a stage, cleaned, repaired, and set side by side with a grand piano — Érard. Bickering and name-calling ensue, back and forth between the two proud personalities.

A large audience arrives, and the keyboardist Louis Diémer steps onstage, explaining his “passion for historic instruments” before giving the world premiere of something rare: a “modern” piece for harpsichord, Francis Thomé’s Rigodon (recorded here by Elaine Funaro, like all the harpsichord pieces in the play).

Then Diémer switches over to the piano for Ravel’s Jeux d’eau (recorded by Randall Love). Taskin and Érard earn each other’s admiration and respect — and even get a little flirty in Eric Love’s hilarious writing and voice acting.

Listen to the whole play here (scroll to the very bottom), or watch a video reading of the children’s book which the play evolved into, The Harpsichord Diaries, which adds in beautiful illustrations (Andrea Love) and haiku (Funaro). You can also learn more about both of these projects in a story from Early Music America focusing on the talented family trio of Funaro, Eric, and Andrea. 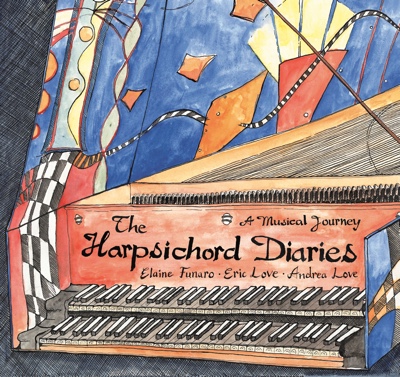 For its latest In Focus episode, “Visions and Impressions,” The Cleveland Orchestra makes a gesture in the direction of welcoming winds back into the action, although principal flute Joshua Smith’s contribution to the event comes in the form of two unaccompanied pieces that leave him looking very lonely on the Severance Hall stage. END_OF_DOCUMENT_TOKEN_TO_BE_REPLACED

LD’s artistic director Debra Nagy introduces the hour-long program with a discourse on the importance of the garden and its centerpiece, the fountain, for artists and musicians of the 14th century. Later in the program, Blue Heron artistic director Scott Metcalfe expands on the subject by exploring the Trinitarian metaphor behind that bubbling source of water in the Medieval mind. END_OF_DOCUMENT_TOKEN_TO_BE_REPLACED

END_OF_DOCUMENT_TOKEN_TO_BE_REPLACED

The latest program, which visits the ghetto and palace at Mantua and the ghetto and church at Venice, uses expressive instrumental music by Salamone Rossi, Giuseppe Sammartini, Antonio Vivaldi, and Alessandro Marcello, two of Benedetto Marcello’s 50 psalm settings, and Hebrew prayers and songs associated with Passover and Purim to evoke the rich cultural life of those towns. END_OF_DOCUMENT_TOKEN_TO_BE_REPLACED