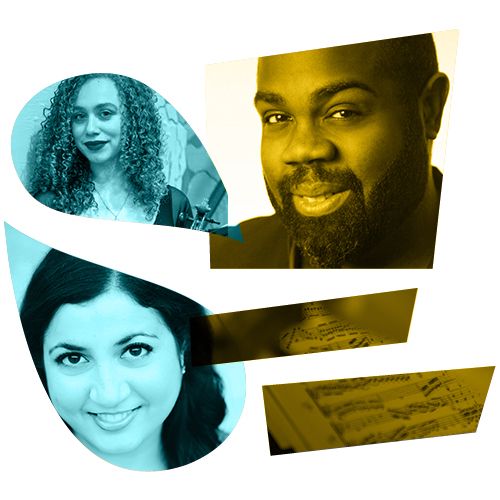 Les Délices finishes off the spring series for SalonEra tonight at 7:30 pm with “La Folia.” That’s something to celebrate, so fittingly, this will be a “party episode” featuring soprano soprano Sherezade Panthaki, countertenor Reginald Mobley, and lutenist Arash Noori, as well as a host of guests and contributing artists in music by Monteverdi, Corelli, Purcell, Marais, Boismortier, and others. Click here at start time. It’s free but a $10 donation is suggested.

The history around this month’s celebrations is complicated, thanks in part to Congress.

In the late 1970s, several joint resolutions were introduced calling for an official weeklong recognition of the contributions of Asian and Pacific Americans to American society. What was agreed upon was that two historic dates would anchor the celebration in the fifth month of the year: May 7, 1843 brought the arrival of the first known Japanese immigrant to America, and May 10, 1869 marked the completion of North America’s first transcontinental railroad, built largely by Chinese immigrants.

Here’s where things get complicated: a few of those resolutions had the Heritage Week celebration lasting for ten days. One simply called for it to happen in early May. Another directed President Jimmy Carter to proclaim the week beginning on May 4, 1979 as Asian/Pacific American Heritage Week.

The last one passed, and beginning that year and continuing for the next decade, Presidents Carter, Reagan, and Bush (H.W.) continued the tradition. It wasn’t until 1990 that the observance was extended throughout the full month of May, thanks to a proclamation by Bush. Two years later, it was made permanent: going forward, May would be Asian/Pacific American Heritage Month.

What still shifts is the name. That’s because of something quite remarkable and, in a way, challenging inherent to this celebration: the vast diversity of cultures and histories represented by the term Asian American, let alone Pacific American. In 2009, President Obama named May as Asian American and Pacific Islander (AAPI) Heritage Month. And just a few days ago, President Biden proclaimed this month as Asian American and Native Hawaiian/Pacific Islander (AANHPI) Heritage Month.

Still, many have stuck with the original name from the ‘90s, including the official government website. There you can find virtual exhibits — one honors veterans’ history, while another reflects on a Japanese-American internment camp through the lens of Ansel Adams’ photography — as well as classroom materials, and resources relevant to the fight against the rising tide of anti-Asian hate and violence.

Local events include a virtual edition of the Cleveland Asian Festival, which will go live on Saturday, May 22 at 10:30 am on YouTube, highlighting a diversity of foods, performances, and other elements of culture and tradition.

And Case Western Reserve University will celebrate Asian, Pacific Islander, Desi, and Asian American heritage with a series of events in the cultural realm (film, literature, poetry), as well as discussions on issues related to community, human rights, and bystander intervention in harassment.