At 3:00 at the Maltz, the Case/University Circle Symphony Orchestra, led by Kathleen Horvath, plays an all-Czech program of music by Dvořák and Smetana. And at 8, BW Opera and director Scott Skiba present Handel’s Alcina in an outdoor production on the steps of the Boesel Musical Arts Center. Details and links in our Concert Listings.

This Indigenous Peoples’ Day is the first one to be recognized by proclamation of a sitting U.S. president.

“For generations, Federal policies systematically sought to assimilate and displace Native people and eradicate Native cultures,” President Biden wrote on Friday. “Today, we recognize Indigenous peoples’ resilience and strength as well as the immeasurable positive impact that they have made on every aspect of American society.”

Let’s reflect on two recent and local musical events to honor Indigenous culture of the Americas.

We begin this past summer with Mexican guitarist, composer, and singer Anastasia Sonaranda (above, middle), who was one of three guest artists involved in the Cleveland Classical Guitar Society’s Creative Fusion virtual series.

Through her residency, Sonaranda sought to illustrate the diversity of styles in Mexican music. The waltzlike “son istmeño” style, developed in the Isthmus of Tehuantepec (which mostly lies in the Mexican states of Veracruz and Oaxaca), was aptly represented by La Llorona, a popular folk song that originated in that same region.

A key element of the arrangement by Sonaranda and Rodrigo Lara Alonso (educator and Latinx Community Liaison for the Guitar Society) is a text that was written for the occasion by Irma Pineda Santiago (above, left), a Oaxacan-born poet who is also a 2020-22 United Nations representative to Indigenous peoples of Mexico, Latin America, and the Caribbean.

The poem, Gunaa runna, is written in the Indigenous language of Isthmus Zapotec or Diidxazá. The Zapotec group of around 50 languages is spoken by 490,000 people, according to the 2020 census, the majority of them in Oaxaca, with the Isthmus area being among the most proud in maintaining that tongue.

Given that the poem reflects on the figure of La Llorona (literally “the weeping woman”), it’s helpful to know the basics of the folklore in advance: a woman has drowned her children, then herself — for various reasons depending on the particular variation of the story — and now roams as a ghost mourning them.

Now, watch the video, which begins with Santiago in recitation — songlike in itself given the tonal aspect of the Zapotec languages — before introducing the musical soloists: on guitar Sonaranda, and on voice Martha Toledo Mar (above, right), herself a Zapotec singer-songwriter from the Isthmus of Tehuantepec. 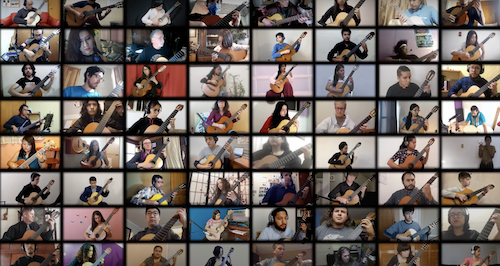 You’ll also hear over 100 guest musicians: students from CCGS Education and from the Orquesta Juvenil de Guitarras de la Ciudad de México, as well as amateur and professional guitarists from Cleveland and Mexico.

Moving north, let’s end by revisiting Les Délices’ September 2020 SalonEra episode “Recovering Roots.” The program shone a spotlight on baritone Jonathon Adams, whose ancestry can be traced back to two groups of Indigenous people primarily from what is now Canada: the Métis (themselves a mix of Indigenous and European — mostly French — descent) and the Cree. 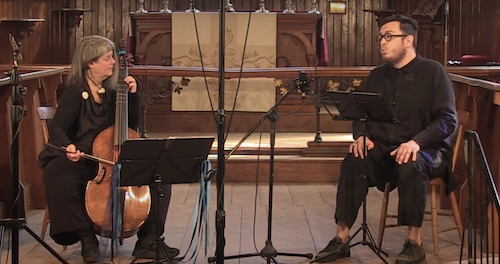 Adams noted exploring that background more and more in recent years, both personally and in early music practice. Thus the baritone’s pre-recorded performance (pictured above) with gambist Susie Napper of a suite from the Métis Songbook combining J’ai fait une maitresse and Chant Cri. The recording, borrowed from Canadian viol ensemble Les Voix Humaines, can be heard on YouTube.

The discussion segments of the episode included Adams’ roots, the texts of the Métis songs (covering multiple languages, with some words that cannot be translated), as well as both cultural exchange and cultural genocide.

You can revisit all of Season 1 of SalonEra, including the full episode of “Recovering Roots,” on-demand through subscription to the series.

END_OF_DOCUMENT_TOKEN_TO_BE_REPLACED

The Orpheus myth inspired French Baroque composers Jean-Philippe Rameau and Philippe Courbois to write expressive solo cantatas about the famous Greek musician-poet and his futile attempts — because of his own impatience — to rescue his beloved Eurydice from the grasp of Pluto in the Underworld. These are beautifully performed by the clear-voiced soprano Hannah De Priest and the velvet-throated baritone Jonathan Woody (who makes a walk-on appearance in the Rameau). END_OF_DOCUMENT_TOKEN_TO_BE_REPLACED

Now that live concerts are beginning to proliferate, it was delightful to hear Oberlin cello professor Darrett Adkins ring a change on the solo suite format with his Hypersuite No. 3 on September 28 in the Cirigliano Studio Theatre at Lorain County Community College. His program opened the new season of Signature Series performances in Elyria, and was dedicated to the memory of Eva Hornyak. END_OF_DOCUMENT_TOKEN_TO_BE_REPLACED