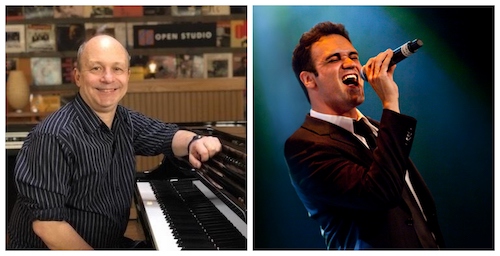 •Almanac: imagining a joint-birthday party for Giovanni Viotti, Jules Massenet, Gabriel Fauré, and Wu Fei, speculating over who would get along and who wouldn’t, at least until dessert

The Oberlin PI program (Performance and Improvisation) will play a free concert featuring Brazilian pianist Helio Alves at the Cat in the Cream.

And Carl Topilow and the Youngstown Symphony will be joined by vocalist Connor Bogart in “Broadway & Beyond” at Powers Auditorium. Expect tunes from Chicago, Grease, and Fiddler on the Roof and songs such as Copacabana, Hey Jude, and Bohemian Rhapsody. Tickets here. (Pictured above: Alves and Bogart.)

Baldwin Wallace is looking for a full-time Production Manager to begin in August. Details at Musical America’s Career Center.

A free online course from English National Opera and the Imperial College Healthcare NHS Trust may help improve the symptoms of long COVID. The program, led by ENO singers, centers around “breathing retraining through singing techniques, using lullabies as its musical starting point,” and has undergone its first clinical trial, Tom Bawden writes for inews.co.uk. So far it’s only been available in England, though Welsh National Opera is piloting something similar in Wales.

Sticking with vocalists, a recent article from EMA profiles three South Asian singers in early music, including soprano Sherezade Panthaki, who has been featured in a handful of Les Délices’ SalonEra programs over the past couple of years. Panthaki, soprano Maya Kherani, and tenor Asitha Tennekoon are among “a growing number of South Asian musicians…working to promote more diversity in early-music programming while building their own impressive careers,” writes Natasha Gauthier.

It’s a joint birthday party, so it’s a given that all of them will go home feeling a little neglected — no one will have a good time. But maybe something interesting will come of it? 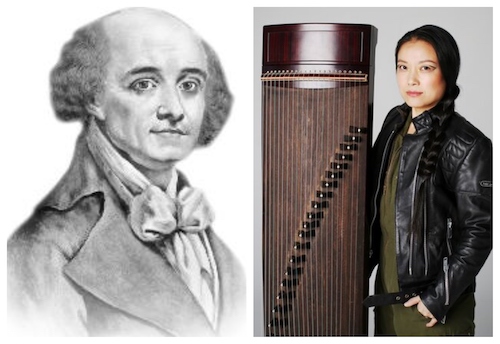 Despite some generational differences, Viotti and Wu Fei might end up enjoying each other’s company, both being virtuoso string-instrumentalists with distinctive brands of improvisation. Listen here to an example of the Nashville-based artist’s musical language on the guzheng, combining East and West as well as traditional and contemporary. Or how about a duet? The guzheng can make a nice pairing with the violin, as evidenced by several videos on YouTube, including this one.

It can be a good thing for a party when some people already know each other — like Fauré and Massenet, who in their time were both members of the Société Nationale de Musique, which promoted new French music.

Or maybe not such a good thing, depending on their history. After Massenet was passed over for the directorship of the Paris Conservatoire (having apparently insisted on being given a lifetime appointment), he resigned from his post as professor of composition. His replacement was Fauré. In other words, this could be a bit of an “awkward turtle” situation — or rather, tortue maladroite. 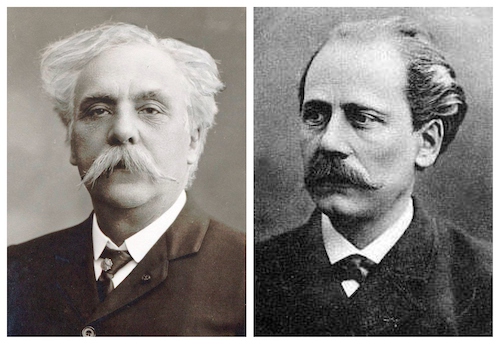 Not to mention the fact that their mutual respect was…questionable. According to one biographer, Fauré considered Massenet’s more popular style of writing (one famous example heard here) to be “based on a generally cynical view of art.” Now that’s cold.

Maybe it’s just me, but all of that doesn’t seem like anything that couldn’t be mended over some ice cream. Speaking of which, let’s make it vanilla — and a few seconds in the microwave to get it a little bit melty. If we’re lucky, we might pay witness to what would surely be two of the most glorious milk mustaches of all time.

The cimbalom was the feature of the show, an instrument capable of taking on many personas. Its performer, Chester Englander, has shaped his career around the instrument, and has inspired composers to write more repertoire for it, some of which was presented on the program. END_OF_DOCUMENT_TOKEN_TO_BE_REPLACED

You wouldn’t expect that acoustic from a glance at the nave, which is wide and long, but not especially lofty. But when I guest conducted a local amateur choir and professional orchestra in Beethoven’s Mass in C there a few years back, during the first rehearsal we released the final chord of the “Gloria” and listened in astonishment for the next several seconds. The sound continued to roll down the space like the big wave that surfers dream about. END_OF_DOCUMENT_TOKEN_TO_BE_REPLACED