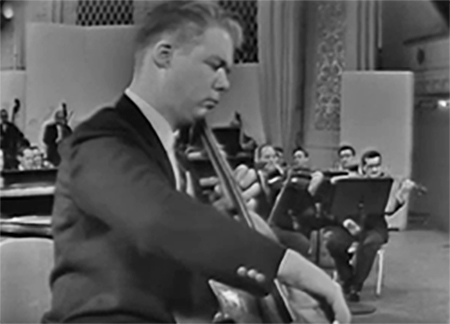 Click here to watch Harrell’s appearance in one of Leonard Bernstein Young People’s Concerts with the New York Philharmonic. On the broadcast of March 19, 1961, the 16-year-old cellist played the last movement of the Dvořák concerto.

Two years later, in an audition arranged by his godfather Robert Shaw, Harrell played the Dvořák for George Szell. As Donald Rosenberg writes in The Cleveland Orchestra Story, the young cellist didn’t receive a warm reception from the autocratic music director. “He took one look at the robust cellist before his Severance Hall audition and said, ‘I’ve heard so much about you. I’m bound to be disappointed.’”

In any case, Harrell joined the cello section at the beginning of the 1963-1964 season at the age of 19, soon advancing to co-principal and finally to principal, a promotion that led to tension with concertmaster Rafael Druian, who, Rosenberg reported — quoting assistant conductor Louis Lane — “took a great dislike to Lynn and constantly complained to Mr. Szell about everything he did.”

Despite Szell’s “caustic sarcasm, his withering looks, his harsh criticism,” Harrell stayed with Cleveland for eight years before embarking on a solo career.

Click here to listen to a tribute to Lynn Harrell by eight members of the National Symphony cello section, who preface their performance of Krzysztof Penderecki’s Agnus Dei, posted earlier this week, with a verbal accolade: “Harrell was an inspiration to generations of cellists as a performer, teacher and was our most eloquent spokesperson. Farewell. Godspeed.”

In addition to Live with Carnegie Hall, enjoy Stravinsky, Weber (with Franklin Cohen) and Wagner during WCLV’s Lunchtime with The Cleveland Orchestra, catch a Detroit Symphony Watch Party featuring violinist Stefan Jackiw, revisit Oberlin’s Prism concert from the fall of 2018 with musicians all over the place inside and outside Finney Chapel, see if Calaf can answer the ice princess’s three questions in a MET Opera archive performance of Turandot conducted by Yannick Nézet-Séguin, and find out what fp Creative is up to in its latest Long Distance Live concert. Details here.

END_OF_DOCUMENT_TOKEN_TO_BE_REPLACED

A new CD by Christa Rakich, who is currently Visiting Professor of Organ at the Oberlin Conservatory, gives a nod in two directions. As its title announces, it’s an homage to her former teacher and colleague, the late Yuko Hayashi, longtime professor at the New England Conservatory and curator of Boston’s Old West Church Organ Series. It’s also the first recording to be made of Richards, Fowkes & Co.’s Opus 16 instrument, built in 2008 for Goodson Chapel of the Duke Divinity School in Durham, North Carolina. END_OF_DOCUMENT_TOKEN_TO_BE_REPLACED

END_OF_DOCUMENT_TOKEN_TO_BE_REPLACED

Hailed by the New York Times as “The Best Classical Music Ensemble of 2018,” Wet Ink Ensemble has lived up to this acclaim once again with their recent release Glossolalia/Lines on Black. The album takes its name from the two extended works by Wet Ink members Alex Mincek (saxophone) and Sam Pluta (electronics). The remainder of the septet includes Eric Wubbels (piano), Erin Lesser (flutes), Ian Antonio (percussion), Josh Modney (violin), and Kate Soper (voice). END_OF_DOCUMENT_TOKEN_TO_BE_REPLACED

Croatian-born pianist Martina Filjak, now living in Berlin, has released her latest album, Light and Darkness, featuring music by Franz Liszt — plus an epilogue by Arvo Pärt. The disc confirms once again all the special technical and interpretive qualities that won her the gold medal at the Cleveland International Piano Competition in 2009. END_OF_DOCUMENT_TOKEN_TO_BE_REPLACED