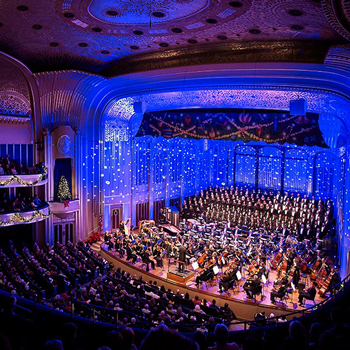 THE VIRUS THAT STOLE CHRISTMAS:

Early on Wednesday afternoon, The Cleveland Orchestra announced that its entire series of Christmas Concerts — already scaled down to eliminate choral music — will be cancelled “due to the recent and continued rise of positive cases of Covid-19 across the state in order to maintain the health and safety of audiences, musicians, staff and volunteers.”

Ticket holders for the fifteen performances scheduled from December 10-23 have the option of donating their tickets back to the Orchestra and receiving a tax receipt, exchanging their tickets for a gift certificate, or receiving a refund. Orchestra President and CEO André Gremillet explains the decision in a video.

Farther afield, ChamberFest Cleveland wants to tip you off to a performance by pianist Roman Rabinovich on the Philadelphia Chamber Music Society series. And fans of Cleveland guest performers and composers may want to catch a program of music by George Walker at the Baruch College Performing Arts Center, and a 92nd St. Y recital by the Emerson String Quartet with Yefim Bronfman. And then there’s a Live at Carnegie Hall program remembering the late Ruth Bader Ginsburg. See the Musica America guide linked at the top of our Concert Listings page for more information.

Two eminent composers left this life on November 19, due in both cases to microbes: German Johann Hermann Schein (of the plague) in 1630 in Leipzig, and Franz Peter Schubert (of typhus) in 1828 in Vienna.

Schein, a friend of Heinrich Schütz who was likewise influenced by early Italian Baroque music, preceded J.S. Bach at Leipzig’s Thomaskirche, and wrote equal quantities of vocal and instrumental music. His instrumental suites, collected in the 1617 publication Banchetto musicale, were meant to be played during dinner, as the title suggests.

Visit the special sound world of Schein’s era with Intrada 21, played on the wonderful, buzzy instruments of the curtal and rackett family by the Unholy Rackett ensemble.

Schein’s sacred music is replete with madrigalesque word painting, as you can hear in his 1623 cycle Israelis Brünnlein, performed by Gli Angeli Genève at the Geertekerk in Utrecht in 2011. Zero in on one of the movements, the motet Die mit Tränen säen (“Those who sow with tears”), with Philip Herreweghe and the Ensemble Vocal Européen in this follow-along-with-the-score performance.

Schubert is so ubiquitous in the concert hall that we’ll just give a tip of the hat to his wonderful cello quintet, performed here (first movement only) on a ChamberFest Cleveland concert in Harkness Chapel in 2015, before we move on to less-familiar repertoire.

Those works would include Schubert’s songs for male chorus, which imbibe the spirit of Austro-German Romanticism (quite literally — many of them are drinking songs). Robert Shaw recorded ten of them in 1992 with an ensemble drawn from the Robert Shaw Chorale. Listen here.

The spirit of the forest is invoked both musically and instrumentally in Schubert’s Nachtgesang im Walde for male voices and four valve horns, performed here by members of the Vienna State Opera Chorus and Vienna Symphony.

Even more emblematic of Schubert’s philosophical world are his three settings of Johann Wolfgang von Goethe’s Gesang der Geister über den Wassern (“The soul of mankind is like water”). One is for unaccompanied male chorus, an entirely different setting that the composer left unfinished adds piano, and the remarkable third version — again completely different — adds an ensemble of low strings. Listen to No. 3 as performed in 2011 by the Norwegian Soloist Choir and the Oslo Camerata, directed by Grete Pedersen.

Not such a bad thing, as it turns out. “Building Bridges Together,” which debuted as a video production on November 21, combined the strengths of two fine Cleveland performing arts organizations in a beautifully edited virtual event — bringing them into the same performing space for the first time through digital means. END_OF_DOCUMENT_TOKEN_TO_BE_REPLACED