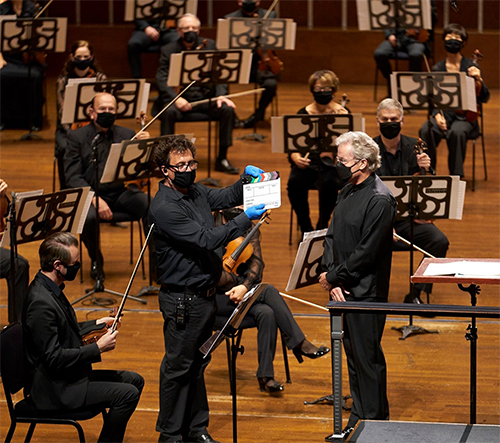 The Cleveland Orchestra returns to the Severance Hall stage tonight, masked, reduced in numbers, and players physically distanced, in a recorded, one-hour performance. The broadcast will be available for three months to subscribers, donors, membership holders, and individuals who subscribe to premium content on the Orchestra’s new streaming platform, Adella.

The first of five episodes of the In Focus series features the Orchestra’s string section in music by Respighi, George Walker, and Tchaikovsky with Music Director Franz Welser-Möst on the podium for the first time since March (recording session photo by Roger Mastroianni).

Also on your screens today: Local 4 of the Musicians Union continues its “Tuning In” series with jazz from the Bop Stop, The Sphinx Organization holds a gala evening, and the Russian Duo streams from the Maltz Performing Arts Center. Details in the Concert Listings.

Joining the MET Opera and Broadway theaters, the New York Philharmonic has now announced the cancellation of its entire concert season, reflecting “a growing sense that the resumption of large-scale performing arts in New York, and throughout much of the nation, is still almost a year away.” Read the New York Times story by Zachary Woolfe here.

Imani Winds flutist Brandon Patrick George, an Oberlin grad, has released his debut recording. He speaks about his career with New York Times music critic Corinna da Fonseca-Wollheim here. As we mentioned in Tuesday’s Diary, the Imani are the subject of the first episode in the Cleveland Chamber Music Society’s fall broadcasts, “Safe with Sound.”

And classical guitarist Sharon Isbin, recently named Instrumentalist of the Year by Musical America, is the subject of that publication’s most recent edition of “Unscripted.” MA writes that it expected the guitarist to reveal a staid lifestyle. “The virtuosa regaled us, however, with stories of music floating in low-earth orbit, Parisian bedbugs, desired collaborations with Pink, and flying fingernails that can bring an orchestra to a standstill. This multiple GRAMMY Award winner’s repertoire is clearly more varied than we thought.” Listen here.

German philosopher, philologist, poet, cultural critic and sometime composer Friedrich Nietzsche was born on this date in 1844. His ideas exerted a profound influence on modern intellectual history, and on the music of Gustav Mahler, Frederick Delius, and Richard Strauss, although Nietzsche admitted that he himself was probably “a thoroughly unsuccessful musician.” Conductor Hans von Bülow agreed, describing one of Nietzsche’s pieces as “the most antimusical draft on musical paper that I have faced in a long time.”

Strauss incorporated Nietzsche’s philosophy into his tone poem based on the book Also sprach Zarathrustra. Listen here to a rare, 1944 high-fidelity recording of the composer conducting the work with the Vienna Philharmonic. And the Cleveland Institute of Music marked the passing of conductor Louis Lane with a recording of the piece by Lane and the CIM Orchestra in March, 2000.

And with so many concert halls standing empty and musicians out of work due to the pandemic, we can look back nostalgically to the opening of two important venues on this date in history.

On October 15, 1900 The Boston Symphony — founded in 1881 — opened Symphony Hall with a gala program. Based on such traditional European halls as the Leipzig Gewandhaus, the venue has been celebrated for its excellent acoustic, partly due to its coffered ceiling and sixteen statues in niches that help distribute the sound. While performances are on hold for the foreseeable future, take a tour of the building with Amariah Condon and meet one of the Orchestra’s librarians here.

And 32 years later on this date, San Francisco’s War Memorial Opera House opened its doors with a performance of Tosca. The first municipally-owned opera house in the U.S. is also biding its time until live performances can happen again. In the meanwhile take a look behind the scenes of San Francisco Operas 2011 Ring cycle here.

The first such video, capturing the October 20 performance of Resilience at First Baptist Church in Shaker Heights, delivered handsomely on that promise. Erica Brenner’s sensitive videography and audio mixing preserved brilliant performances of music that illuminated two troubled periods in history: the plague of London in 1665, and the outbreaks of cholera and dysentery that dampened but failed to defeat the human spirit at the end of the American Civil War two centuries later. END_OF_DOCUMENT_TOKEN_TO_BE_REPLACED

The Diamond Brass Quintet opened Rocky River Chamber Music Society’s new season on Monday, October 12 with nobody in the pews at West Shore Unitarian Universalist Church. Like most performances these days, the concert was only attendable online. The players were widely-spaced on the stage, plexiglass shields were in place to cut down on aerosol transmissions, and the quintet took two intervals to go outdoors and let the air in the sanctuary refresh itself. (Rehearsals had been held outside as well.) END_OF_DOCUMENT_TOKEN_TO_BE_REPLACED

“Bewitched,” the first subscription concert of this season by Les Délices, can be summed up in one word: sensational. In her introductory remarks, director Debra Nagy talked about the “Embracing Change” theme of the season and completely rethinking the concert experience for streaming. The detailed planning was in evidence throughout the program. “Bewitched” was not just a concert; it was a carefully planned musical film, with elements of drama and music appreciation, all in support of the inspired program choices featuring Medea and Circe, two famous witches (or sorceresses, if you prefer) of classical antiquity. END_OF_DOCUMENT_TOKEN_TO_BE_REPLACED

END_OF_DOCUMENT_TOKEN_TO_BE_REPLACED

Though it had amassed a vast trove of audio over the decades, The Cleveland Orchestra has come late to the game in the video department. Even so, the organization wasn’t about to rush to produce the equivalent of home movies to keep its patrons engaged while live events were on hold. END_OF_DOCUMENT_TOKEN_TO_BE_REPLACED

END_OF_DOCUMENT_TOKEN_TO_BE_REPLACED

Although it wasn’t the original plan to go online last weekend for the final round of the James Stroud Classical Guitar Competition, moving to a digital format suited the event well. Young performers Aytahn Benavi, Patricia Hernandez, Ian Tubbs, and Eric Wang played in the intimate setting of their own homes, giving everyone who tuned in a front row seat. END_OF_DOCUMENT_TOKEN_TO_BE_REPLACED