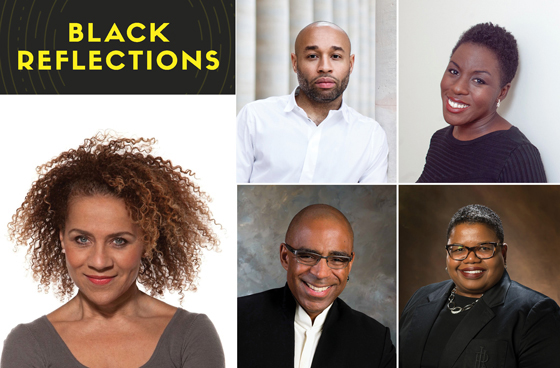 (Earlier this week, the Oberlin Faculty approved a statement, “Towards a More Equitable and Diverse Conservatory Education.” Read the full document here.)

Also on today: “We Three Quings” from Bop Stop, with Noa Even, saxophone, Dan Bruce, guitar, and Anthony Taddeo, drummer, a Mozart Flute Concerto with Joshua Smith on Lunchtime with The Cleveland Orchestra, and the MET Opera’s archive production of Massenet’s Cendrillon. Visit the Concert Listings for details.

NEW VIDEO FROM THE ART MUSEUM:

In a conversation with CMA’s Tom Welsh, Ruth Reichl, sometime restaurant critic for the New York Times and editor of Gourmet Magazine, explores her Cleveland connection through her grandmother Mollie Brudno, “an unheralded but important impresario in the mid-20th century who organized hundreds of concerts with the Cleveland Museum of Art.” Watch the latest episode of CMA Behind the Beat here.

On this date in 1684, German organist and composer Johann Rosenmüller died at Wolfenbüttel, where he ended his career as choirmaster at the ducal court. Previously, he was organist at the Nikolaikirche in Leipzig before getting run out of town for alleged homosexual activities. He fled to Venice to work at San Marco and at the Ospedale della Pieta.

Watch videos of Rosenmüller’s Das ist meine Freude and Nisi Dominus performed by Burning River Baroque at St. Alban’s in Cleveland Heights in March, 2018, and of his Magnificat in c by ARTEK and Les Sacqueboutiers du Toulouse in 2017 at Old St. Patrick’s in New York.

And on September 10, 1941, British conductor, harpsichordist and musicologist Christopher Hogwood was born in Nottingham. Co-founder with David Munro of the Early Music Consort in 1967 and founder of the Academy for Ancient Music in 1973, Hogwood was a central figure in the early music revival movement, including his tenure as music director of Boston’s Handel and Haydn Society, but his expertise extended into more modern music as well.

Watch a video where Hogwood conducts Mozart’s Piano Concerto No. 15 with Robert Levin at the fortepiano, and a 2013 Gresham College lecture here where Hogwood talks about Messiaen’s Quartet for the End of Time with live musical illustrations. (He died a year later in Cambridge, where he served as honorary professor at Cambridge University.)

Joining a long list of arrangers, Parker Ramsay has now transcribed the Variations for the modern pedal harp, an instrument for which he holds a master’s degree from Juilliard, in addition to a degree in history from Cambridge University, plus a master’s in historical performance (organ and harpsichord) and an artist diploma (organ) from Oberlin. END_OF_DOCUMENT_TOKEN_TO_BE_REPLACED

As organizations gingerly take steps to open up for business, it’s refreshing to have new content to listen to and write about after a solid six months of archival footage. END_OF_DOCUMENT_TOKEN_TO_BE_REPLACED

END_OF_DOCUMENT_TOKEN_TO_BE_REPLACED

Over the past few years, Brian Giebler has visited Northeast Ohio in settings both orchestral and choral, and with repertoire as diverse as Stravinsky, Bach, and the local premiere of a new work. In his impressive solo recording debut a lad’s love, released on Bridge Records, the New York City-based tenor turns his focus to British songs from the first half of the 20th century — a mix of cycles and individual works — and tops off the playlist with a touch of the modern. END_OF_DOCUMENT_TOKEN_TO_BE_REPLACED

To steal a phrase from the third-century Greek philosopher Sextus Empiricus, the mills of the gods grind slowly, but they grind exceedingly fine. The same goes for Deutsche Grammophon. It’s been a dozen years since they were recorded in Hamburg in 2009, but the German company has now issued fifteen Rachmaninoff piano pieces magnificently and poetically played by Sergei Babayan. END_OF_DOCUMENT_TOKEN_TO_BE_REPLACED

END_OF_DOCUMENT_TOKEN_TO_BE_REPLACED

After considering all its options, Cleveland’s period ensemble Les Délices decided to fully embrace the idea of creating pre-recorded “shows” in the place of live, in-person performances this season. END_OF_DOCUMENT_TOKEN_TO_BE_REPLACED