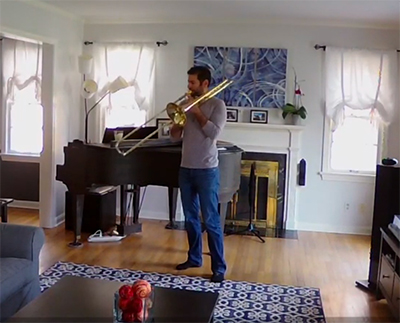 While on exile from Severance Hall, Cleveland Orchestra musicians are keeping up their chops at home in interesting ways both musical and technological. Assistant Principal Trombone Shachar Israel has produced a delightful video featuring seven players that passes the prelude from J.S. Bach’s Third Cello Suite off seamlessly from Mark Kosower to Alan Harrell, Max Dimoff, Brian Thornton, Israel himself, Derek Zadinsky, Jonathan Sherwin, and back to Kosower. The Bach suites provide primary practice, warmup, and interpretational material for a variety of instrumentalists, but some of these performances may surprise you. Watch here (and enjoy other episodes of the Orchestra’s Living Room Concert videos nearby).

Today’s playlist includes Dvořák, J.S. Bach, and Debussy on WCLV’s Lunchtime with The Cleveland Orchestra, an Oberlin Stage Left conversation with four Oberlin Conservatory faculty members about teaching virtually this semester, Wagner’s Lohengrin from the MET Opera, and, a Live from Carnegie Hall episode hosted by Yannick Nézet-Séguin about the Philadelphia Orchestra’s history at the New York venue. Details here.

On this date in 1954, the iconoclastic American composer Charles Ives died in New York. Son of a Civil War bandmaster, Ives began playing organ and composing at an early age in his hometown of Danbury, Connecticut, studied composition at Yale with Horatio Parker, and wrote music in his spare time while working as an executive in the insurance industry. Ives’ music, most of it produced before 1918 when he suddenly stopped writing, shows numerous and widespread influences. Leonard Bernstein devoted Volume 2 of his famous New York Philharmonic Young People’s Concerts to a survey of the composer’s life and works. Watch the February 23, 1967 broadcast of Charles Ives — American Pioneer here.

END_OF_DOCUMENT_TOKEN_TO_BE_REPLACED

A new CD by Christa Rakich, who is currently Visiting Professor of Organ at the Oberlin Conservatory, gives a nod in two directions. As its title announces, it’s an homage to her former teacher and colleague, the late Yuko Hayashi, longtime professor at the New England Conservatory and curator of Boston’s Old West Church Organ Series. It’s also the first recording to be made of Richards, Fowkes & Co.’s Opus 16 instrument, built in 2008 for Goodson Chapel of the Duke Divinity School in Durham, North Carolina. END_OF_DOCUMENT_TOKEN_TO_BE_REPLACED

END_OF_DOCUMENT_TOKEN_TO_BE_REPLACED

Hailed by the New York Times as “The Best Classical Music Ensemble of 2018,” Wet Ink Ensemble has lived up to this acclaim once again with their recent release Glossolalia/Lines on Black. The album takes its name from the two extended works by Wet Ink members Alex Mincek (saxophone) and Sam Pluta (electronics). The remainder of the septet includes Eric Wubbels (piano), Erin Lesser (flutes), Ian Antonio (percussion), Josh Modney (violin), and Kate Soper (voice). END_OF_DOCUMENT_TOKEN_TO_BE_REPLACED

Croatian-born pianist Martina Filjak, now living in Berlin, has released her latest album, Light and Darkness, featuring music by Franz Liszt — plus an epilogue by Arvo Pärt. The disc confirms once again all the special technical and interpretive qualities that won her the gold medal at the Cleveland International Piano Competition in 2009. END_OF_DOCUMENT_TOKEN_TO_BE_REPLACED