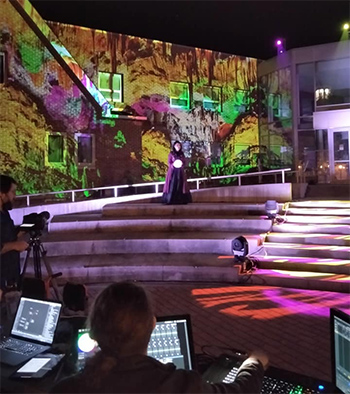 The Noon concert at the Church of the Covenant in University Circle will feature Bangor, Maine organist Kevin Birch at the 17th-century style gallery organ in works by Sweelinck, Weckmann, Bolt, and J.S. Bach.

And tonight at 7 in University Circle, the Cleveland Institute of Music will host the touring Sphinx Virtuosi and cello soloist Thomas Mena in a program highlighting Black and Latino composers. You’ll need a free seating pass for the concert in Kulas Hall.

On the West side of town, violinist Franceca dePasquale and pianist Scott Cuellar will join the Verona Quartet for a faculty recital in Warner Concert Hall at Oberlin at 7:30 pm (concertos by Lowell Lieberman and Ernest Chausson).

And at 8 pm in Berea, if the weather holds, BW Opera will present the second of four performances of Handel’s Alcina on the front patio of the Boesel Musical Arts Center (pictured). Some 50 reserved seats ($25) come with chairs. Free seating on the lawn if you bring your own chairs or blankets.

Kent State University will hold a Celebration of Life for the late Richard D. Worthing, on Saturday, October 16 at 1:00 pm in Ludwig Recital Hall. Worthing, who died in 2020, taught music theory, analysis and orchestration, served as coordinator for the Kent/Blossom Music Festival, and Assistant Dean of the College of Fine and Professional Arts, and was named Dean Emeritus upon his retirement. Details here.

The Metropolitan Opera will simulcast its October 23 matinee performance of Terence Blanchard’s Fire Shut Up in My Bones, its season opener, and the first title by a Black composer to be staged by the company. Click here for a list of area theaters and to reserve tickets.

The 90th episode of the Baldwin Wallace Bach Festival to be held from April 8-10, 2022, will feature guest appearances by the period string band ACRONYM, the Diederot Quartet, and a performance of Bach’s Christmas Oratorio. (More information to come in January). On Wednesday, October 27 at 8 pm, WCLV 104.9 will rebroadcast the 2021 Virtual Bach Festival Mass in B Minor Retrospective.

On this date in 1872, Ralph Vaughan Williams was born in Down Ampney, Yorkshire, a village after which the British composer named one of the popular hymn tunes he wrote while serving as editor of The English Hymnal, published in 1906. (Listen to an arrangement made and played by Todd Wilson with the choir and instrumentalists of First-Pilgrim Church in Lincoln, Nebraska, in 2014.)

The range of RVW’s work was vast. To suggest just two radically different compositions that reflect his lifelong interests, let’s choose Along the Field and A Vision of Aeroplanes.

The former represents his close association with English folksong, of which he collected numerous examples and made arrangements for various combinations of voices and instruments. He so internalized that repertoire that he could write easily in the style, as in his settings of Edwardian poet A.E. Housman in Along the Field, simply but eloquently scored for solo voice and violin. Listen here to a performance of the cycle by soprano Marie Henriett Reinhold and violinist Dietrich Reinhold.

The other extreme finds Vaughan Williams exploring the full range of drama at his disposal as an early 20th century composer. Orchestrally, this expresses itself in his symphonies and in such works as Job, a Masque for Dancing, with its frightening musical depictions of Satan, but otherwise in his charmingly titled setting of the Vision of Ezekiel from the Hebrew scriptures for organ and chorus. The organ part is as fearsome for the keyboardist as the musical declamation is for the singers. Stay with it to the end in this performance by the University of Cambridge’s Clare College Choir.

And it was on this date in 1887 that Australian soprano Mrs. Helen Porter Armstrong made her sensational operatic debut in Brussels. We know her best by her stage name, Nellie Melba, as well as for two culinary items named in her honor, Melba Toast, and Peach Melba. Here’s a restored studio recording of the celebrated diva singing the finale of Act I of La traviata.

END_OF_DOCUMENT_TOKEN_TO_BE_REPLACED

The Orpheus myth inspired French Baroque composers Jean-Philippe Rameau and Philippe Courbois to write expressive solo cantatas about the famous Greek musician-poet and his futile attempts — because of his own impatience — to rescue his beloved Eurydice from the grasp of Pluto in the Underworld. These are beautifully performed by the clear-voiced soprano Hannah De Priest and the velvet-throated baritone Jonathan Woody (who makes a walk-on appearance in the Rameau). END_OF_DOCUMENT_TOKEN_TO_BE_REPLACED

Now that live concerts are beginning to proliferate, it was delightful to hear Oberlin cello professor Darrett Adkins ring a change on the solo suite format with his Hypersuite No. 3 on September 28 in the Cirigliano Studio Theatre at Lorain County Community College. His program opened the new season of Signature Series performances in Elyria, and was dedicated to the memory of Eva Hornyak. END_OF_DOCUMENT_TOKEN_TO_BE_REPLACED