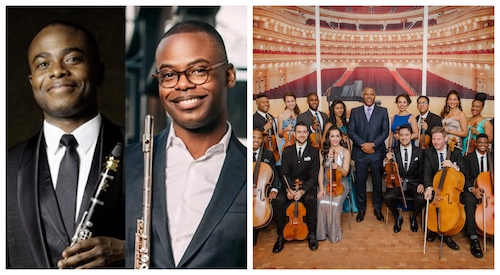 At the beginning of February, we recommended several events and attractions highlighting either Black History Month specifically, or Black musicians and composers in general. Some of those events are still on the horizon, or still available on-demand.

Here’s one addition to that list: the three-day Triumph Over Adversity Festival, presented by California’s Philharmonic Society of Orange County, and held online beginning on Thursday.

Other events involved in the festival include Q&As with the artistic directors and a roundtable with several of the featured composers. Those are also free, but you’ll need to fill out a reservation form.

At 2:00, Tuesday Musical and the Ohio Alliance for Arts Education host a webinar titled “Entry Points to Music Careers” featuring three panelists from the Sphinx Virtuosi (register here). Moving to this evening, the Pipino Performing Arts Series offers a presentation featuring composer Du Yun at 7:00 (preceded by a 2:00 master class), the Met Opera continues with its Nightly Streams at 7:30, and the Baltimore Symphony highlights composers who were suppressed by Nazi censorship in a program at 8:00. More details in our Concert Listings.

In a newsletter, Quire Cleveland director Jay White sends a message of love, as well as three recordings from the ensemble’s “Journey Home” program, presented last year on February 29. Listen to two motets by Mikołaj Zieleński (In Monte Oliveti and Vox In Rama) and one by Jacob Handl (Miserere Mei, Deus).

February 17 in music history brought the death of composer and ethnomusicologist Nikoghayos Tigranian (1951) and conductor Bruno Walter (1962), considered one of the greats of his field in the 20th century. Those who have entered the world on this date include cellist and early music pioneer Anner Bylsma (1934), as well as two composers who also became key figures in the development of the violin: Arcangelo Corelli (1653) and Henri Vieuxtemps (1820).

Here’s one more figure born on this date who, unlike those names, is still around to make some noise: composer and hornist Michelle McQuade Dewhirst (1973), a professor at the University of Wisconsin, Green Bay, whose music has been heard in Cleveland on two memorable occasions. Last October, No Exit presented Transient Canvas in an online concert that included her piece shenpa. And going back a few years, she took Second Place and the Audience Choice Award in the 2014 Iron Composer competition.

Iron Composer is of course a totally different beast. She and her fellow finalists were given an instrumentation and a “secret musical ingredient” in the morning, then had five hours to write a new piece, and thirty minutes to rehearse it. That year’s compositional specifications? A low string trio (viola, cello, double bass) involving a sound map of downtown Cleveland, with recordings from locations within a mile of the Great Lakes Science Center.

What I still wonder, given my conversation with contest director Joe Drew in 2014: when is the live gerbil going to be tossed into the mix?

Banks carried four different saxophones with him to the audience-less West Shore Unitarian Universalist Church, along with two classic pieces he had transcribed and three powerful new works — one of them his own. He explained at the start that the new pieces would be receiving “workshop performances” as he prepares them for his Young Concert Artists (YCA) debut recital at New York’s Merkin Hall on March 10, when he will again be joined by Bjerken. END_OF_DOCUMENT_TOKEN_TO_BE_REPLACED

Episode 5 is subtitled “Musical Patterns,” a nod to the fact that three of the four works are examples of “minimalism,” or maybe more precisely, “repetitive music.” END_OF_DOCUMENT_TOKEN_TO_BE_REPLACED

END_OF_DOCUMENT_TOKEN_TO_BE_REPLACED

Artistic director Timothy Beyer set the tone for the opening work by Jeremy Rapaport-Stein, appearing like the floating head of the Wizard of Oz in a quasi-film noir introduction. Beset with a parched throat, he turned the emcee job over to a ventriloquist’s dummy, who carried on in time-honored vaudeville style while Beyer drank a glass of water. END_OF_DOCUMENT_TOKEN_TO_BE_REPLACED