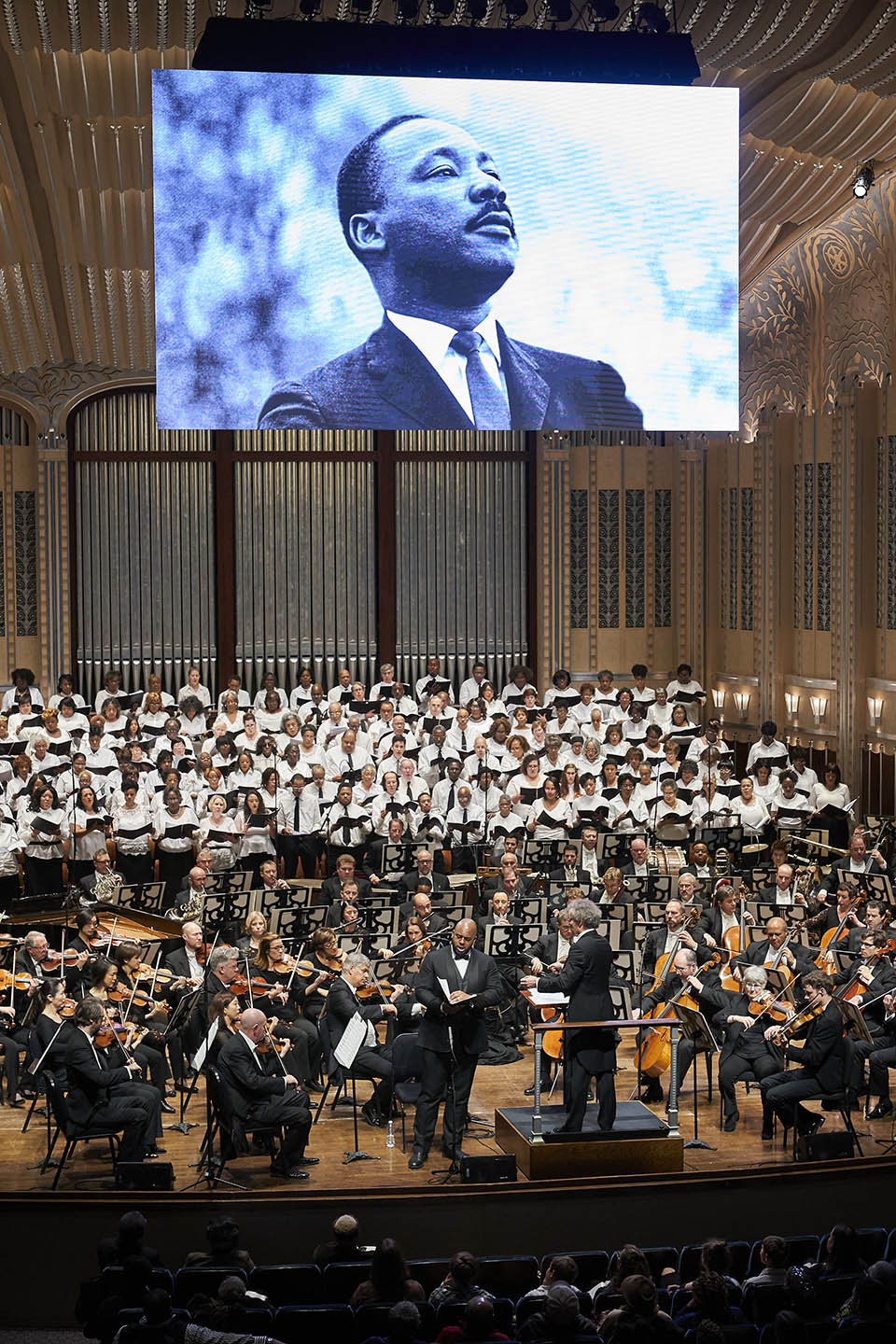 On Monday, we featured a video of Metropolitan Opera principal trumpet Billy Hunter playing The Star-Spangled Banner, but going quiet at the end at two key words: “free” and “brave.” One possible takeaway from that is a message that has become more and more of a refrain in society over the past year, from the killing of Breonna Taylor and George Floyd, to the violence inflicted on peaceful protesters this past summer, to the lenient treatment of insurrectionists at the U.S. Capitol last week: “We live in two different Americas.”

The phrase “two Americas” was most famously uttered by Martin Luther King, Jr. during a speech at Stanford University in 1967. King was not addressing discriminatory treatment at the hands of police: he was speaking about the economic stratification of society, especially in relationship to race. But it’s a timeless phrase with many applications, as was made more clear than ever one week ago today in Washington, D.C., and it serves as one possible avenue through which to reflect on the legacy of human rights and activism that King left behind.

On the day of the Capitol insurrection, Senator-elect Raphael Warnock — who is also the senior pastor at Atlanta’s Ebenezer Baptist Church, a former congregation of King’s — offered up another quote that never ceases to be relevant. Warnock wrote on Twitter:

In this moment of unrest, violence and anger, we must remember the words of Dr. King, “Darkness cannot drive out darkness: only light can do that. Hate cannot drive out hate: only love can do that.” Let each of us try to be a light to see our country out of this dark moment.

It’s impossible to summarize King through a couple of statements. But both the incredible ability to inspire, as seen in that quote, and the keen awareness of society’s injustices (“Two Americas”) are part of who he was.

On that note, let us proceed to a collection of arts-related events in the area that will be accessible virtually over the coming days, and that are designed to honor Martin Luther King, Jr.

The Cleveland Orchestra’s Annual MLK Celebration will be a re-broadcast of the 2018 event, which was held during the 50th anniversary year of King’s assassination. It’s available for free on the Orchestra’s Adella platform from 7:00 pm on January 14 until April 14.

The program includes Beethoven’s Overture to Egmont, Mendelssohn’s “Lord God of Abraham” from Elijah and his Symphony No. 5 finale, Walker’s Lyric for Strings, Respighi’s “Pines of the Appian Way” from Pines of Rome, Verdi’s “Va pensiero” from Nabucco, the spiritual Down by the Riverside (arr. Floyd), Dorsey’s Precious Lord (arr. Floyd), Steffe’s Battle Hymn of the Republic (arr. Wilhousky), and Johnson’s Lift Every Voice and Sing.

The Bop Stop offers two live streams on Sunday. First up, at 3:00 pm, is the free MLK Memorial Concert, curated by Linda Allen and Matthew Jones and featuring performances by Music Settlement faculty and students. Click here at start time.

Then at 7:00 pm, the Cleveland Jazz Orchestra Little Big Band joins with the Roots of American Music to present “The Blues and the Self Evident Truth.” The program, featuring vocalist Reginald Bowens, includes excerpts from Chris Coles’ Nine Lives Suite, music by Oliver Nelson to accompany a reading of King’s “Letter from a Birmingham Jail,” and works by Herbie Hancock and Paul Ferguson. Click here at start time (free but donations accepted).

(An excerpt from that famous letter — You may well ask: “Why direct action? Why sit ins, marches and so forth? Isn’t negotiation a better path?” You are quite right in calling for negotiation. Indeed, this is the very purpose of direct action. Nonviolent direct action seeks to create such a crisis and foster such a tension that a community which has constantly refused to negotiate is forced to confront the issue…I have earnestly opposed violent tension, but there is a type of constructive, nonviolent tension which is necessary for growth.)

And as part of a mission to honor “unsung heroes who exemplify Dr. King’s legacy,” the program will incorporate a conversation with Rev. Dr. Marvin A. McMickle, Pastor Emeritus at Antioch Baptist Church, in addition to recognizing 2021 Drum Major For Change recipient India Pierce Lee, Cleveland Foundation Senior Vice President and community leader.

Echoing the words that King popularized during the Civil Rights Movement, The Cleveland Museum of Art hosts “Becoming a Beloved Community” on Monday at 6:00 pm. Poets will use Michaelangelo Lovelace’s painting My Home Town (1998) as a departure point to explore King’s vision for society.

And available beginning on Monday through the following Sunday is a 50-minute video performance by Karamu House titled “Infinite Hope,” honoring King through spoken word, song, and dance. Free, but registration required.

Recent videos from the Orchestra will also be re-released, including George Walker’s Lyric for Strings, Oh Happy Day performed by the MLK Jr. Celebration Chorus in collaboration with Tri-C’s Vocal Arts Mastery Program (both led by Dr. William Henry Caldwell), and Beethoven’s Overture from The Creatures of Prometheus performed by The Cleveland Orchestra and featuring dancers from Cleveland School of the Arts.

Documentary-style videos highlighting Dr. King’s life will also be presented, including some of his most powerful speeches, and honoring individuals and organizations who continue his legacy today.

Other events honoring King include a Baldwin Wallace-hosted Zoom conversation with Black Lives Matter co-founder Opal Tometi on Monday (tickets required), CWRU’s MLK Convention featuring author Heather McGhee (register here), the Cleveland History Center’s curated collection of free online resources and virtual tours focused on the political careers of Carl and Louis Stokes, and the Cleveland Museum of Natural History’s free, online Discovery Day, which includes a planetarium experience showing the sky as it appeared on the day of the “I Have A Dream” speech.

That incredible speech is the one everyone learns about in school, but to close this article, here’s a lesser-known and beautiful quote from King’s 1964 speech upon receiving the Nobel Peace Prize.

I refuse to accept the idea that the ‘isness’ of man’s present nature makes him morally incapable of reaching up for the eternal ‘oughtness’ that forever confronts him.

Northeast Ohio’s Les Délices has long been that rarest of beasts: a world-class organization so proud of its region (ours) and repertoire (distinct niches in pre-1800 music) that it never tries to be everything to everyone, paradoxically making a strong case for a broad, curious international following. In the December episode of its SalonEra series, the ensemble embraces its strengths and community to marvelous effect. END_OF_DOCUMENT_TOKEN_TO_BE_REPLACED

END_OF_DOCUMENT_TOKEN_TO_BE_REPLACED

Another I remember fondly is Gian Carlo Menotti’s Amahl and the Night Visitors.  Commissioned by NBC, the one act, made-for-television opera, premiered on December 24, 1951, at the network’s studios in New York’s Rockefeller Center. And now, through the wonders of technology, Cleveland Opera Theater has created a magical new production of the work which is available on demand through January 6, 2021 (Three Kings Day). END_OF_DOCUMENT_TOKEN_TO_BE_REPLACED

Jessen has now followed up with her second solo CD, Winter Chapel. Recorded on January 17, 2020 in Oberlin College’s Fairchild Chapel and available on Carrier Records, the album is a continuum in Jessen’s journey to push the musical boundaries of her instrument and herself as an improviser. END_OF_DOCUMENT_TOKEN_TO_BE_REPLACED