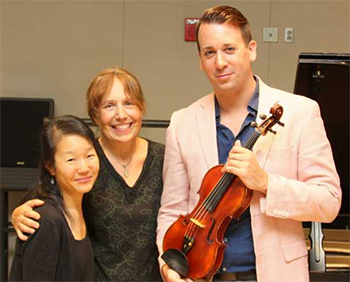 Trinity Cathedral’s Virtual Brownbag Concert starts off the day at noon with violinists Andrew Sords and Mari Sato as two “Dueling Divas,” joined by pianist Elizabeth DeMio in music by Beethoven, Moszkowski, and Sarasate. A CIM brass quintet takes the baton at 7 for selections from Gershwin’s Porgy & Bess. And the Oberlin Guitar Ensemble closes out the evening at 7:30 with music by J.S. Bach, Mertz, and Ponce. Links and details in our Concert Listings.

The Rachel Barton Pine Foundation’s “Music by Black Composers” project has released a free online directory of solo violin music (both with orchestra and unaccompanied) written by Black composers. Their website also links to a couple of other such directories — solo piano and classical guitar — with more to come.

And The New York Times profiles one man (Alexander Neef) who has stepped into a prestigious new job (director of the Paris Opera) at what might be considered a difficult time (“amid a pandemic, labor strikes and internal unrest”). Read here.

This date in music history brought composer Carl Maria von Weber (1786), conductor Eugene Ormandy (1899), and violist/composer Lillian Fuchs (1901) into the world, and composer Ruth Crawford Seeger (1953) out of it.

A few local connections to explore there:

In 2015, after 39 seasons as principal clarinet, Franklin Cohen bid farewell to The Cleveland Orchestra by soloing in Carl Maria von Weber’s Second Concerto. In an interview with ClevleandClassical.com’s Mike Telin, Cohen described the piece as not only operatic and outgoing (Weber was most famous as an opera composer), but also “a little more edgy than the Mozart concerto,” making it a perfect fit for the outdoor stage of Blossom. Too bad we can’t get our hands on that recording.

Part of a musical family, Lillian Fuchs’ two brothers Joseph and Harry both played in The Cleveland Orchestra, Joseph as concertmaster and Harry as a cellist. But bringing the focus back to the violist of the family — who in fact didn’t mind being left out of the spotlight, even by her own parents (“I was delighted to be left alone,” she told The Strad in 1986) — Lillian was a celebrated soloist, chamber musician, and pedagogue who taught for 29 years at the Manhattan School of Music, 26 at the Aspen Music Festival and School, and 22 at the Juilliard School. Her playing inspired works by Bohuslav Martinů, among others.

Her own compositions are less well-known, but violist Marina Thibeault brought Fuchs’ Sonata Pastorale to the LCCC Signature Series in 2019, and recorded it on her album ELLES, dedicated to women composers — listen to the first movement here, and read Thibeault’s interview with Daniel Hathaway here.

And Ruth Crawford Seeger was actually born in East Liverpool, Ohio. She lived for a short time in Akron and around the Midwest before growing up in Jacksonville, Florida. Her career was impressive and unusual — an important American modernist who influenced Elliott Carter, and later became a folk music specialist. She was also the first woman to receive a Guggenheim Fellowship.

Listen to her String Quartet 1931 in a performance by the Denver-based Playground Ensemble here, and read more about the composer and that work in an article from The New York Times. (“…she wrote this piece that’s so ahead of its time,” JACK Quartet violinist Austin Wulliman said.)

Not such a bad thing, as it turns out. “Building Bridges Together,” which debuted as a video production on November 21, combined the strengths of two fine Cleveland performing arts organizations in a beautifully edited virtual event — bringing them into the same performing space for the first time through digital means. END_OF_DOCUMENT_TOKEN_TO_BE_REPLACED