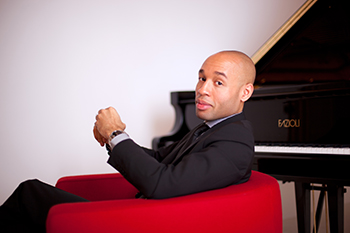 Saturday’s events feature violinist Leonidas Kavakos in his alter ego as conductor with the Rotterdam Philharmonic, Cleveland Orchestra on the Radio featuring violinist Thomas Zehetmair in the Stravinsky Concerto, and Austin Chamber Music’s 18th Annual Black Composers Concert with four premieres and a celebration of the legacy of Samuel Coleridge Taylor.

Sunday’s schedule begins with 16 premieres in the latest Bang on a Can Marathon, and brings you no fewer than four pianists: Aaron Diehl (above) on the Tri-C Classical Piano Series playing music by Black composers, Leif Ove Andsnes from Georgia’s Spivey Hall, the sixth episode of Daniel Shapiro’s complete Beethoven cycle, and Daniil Trifonov from Baltimore’s Shriver Hall.

Two debuts and two finales to celebrate on Saturday, beginning with the birth of Austrian pianist and composer Carl Czerny on February 20, 1791, who became one of Beethoven’s star pupils and was said to be able to play any of his master’s works from memory if merely requested by opus number. Czerny is remembered today chiefly for his piano etudes, but his more than 1,000 compositions include such interesting works as the Piano Concerto in C for Four Hands, Op. 153, and the Symphony No. 5 in E-flat.

Belgian composer and violinist Henri Vieuxtemps was born on the 20th of February in 1820, and enjoyed an international touring career that included concerts in the United States before returning to Brussels and suffering a stroke in 1873. There, he was the teacher of Eugène Ysaÿe, and when Vieuxtemps returned to Paris, Henryk Wieniawski took over his class. A second stroke in 1879 ended his performing career.

Vieuxtemps was a prolific composer, but as might be expected, wrote chiefly for the violin. Watch Hilary Hahn here in a performance of his Fourth Concerto with Paarvo Järvi and the Deutsche Kammerphilharmonie Bremen (and stick around afterwards to enjoy two Bach encores).

Australian composer and pianist Percy Grainger left the scene on February 20, 1961 in White Plains, NY, at the age of 78. Grainger joined a group of musicians in a lifelong quest to rescue British and Scandinavian music from central European influences, largely through the use of folk music, though he also dabbled in mechanical music-making (including recording piano rolls of his compositions and arrangements.)

Among Grainger’s most popular arrangements are wind band versions of Lincolnshire Posy (listen here to the Cleveland State University Symphonic Wind Ensemble’s performance at a Trinity Cathedral Brownbag Concert) and Irish Tune from County Derry (aka “Danny Boy,” performed here by the University of Michigan Symphonic Band). As a high schooler, I looked forward to hearing Irish Tune at the end of each of the University of Kansas summer music camp concerts, and still get the chills in the last verse when the horns suddenly soar out their counter melody.

And on February 20, 1996, Japanese composer Tōru Takemtsu died in Tokyo. His nature-based compositions are popular and frequently performed — especially at the Cleveland Institute of Music. Click on the links to listen to Water-ways, Rain Spell, Toward the Sea, and And Then I Knew ‘Twas Wind, and join the CIM New Music Ensemble live stream on February 28 for his Stanza II.

Sunday’s honorees begin with French organist and composer Charles-Marie Widor, born on February 21, 1844 in Lyon. Widor is most famous for the organ symphonies (really suites) he wrote during his tenure at Saint-Sulpice in Paris, and among those, for the Toccata that closes out No. 5. But try out Widor’s Sixth Symphony, played here by Brian Wentzel on the new Paul Fritts organ in First Lutheran Church in Lorain. (Pressed for time? Fast forward to the finale at 31:25.)

And on February 21, 1996, American composer and arranger Morton Gould died in Orlando, FL at the age of 82. Active in all areas of stage, concert and commercial music, Gould served for a number of years as president of ASCAP. Start with an interview Gould conducted with conductor Leopold Stokowski — who championed his music — and listen to his Second Symphony in a vintage recording by the New York Philharmonic at its premiere in June, 1944. And for a taste of Gould’s expert arrangements, watch the U.S. Air Force Symphony perform his American Salute (based on “When Johnny Comes Marching Home”). Many of us will remember experiencing the work from the inside in high school orchestras and bands.

Banks carried four different saxophones with him to the audience-less West Shore Unitarian Universalist Church, along with two classic pieces he had transcribed and three powerful new works — one of them his own. He explained at the start that the new pieces would be receiving “workshop performances” as he prepares them for his Young Concert Artists (YCA) debut recital at New York’s Merkin Hall on March 10, when he will again be joined by Bjerken. END_OF_DOCUMENT_TOKEN_TO_BE_REPLACED

Episode 5 is subtitled “Musical Patterns,” a nod to the fact that three of the four works are examples of “minimalism,” or maybe more precisely, “repetitive music.” END_OF_DOCUMENT_TOKEN_TO_BE_REPLACED

END_OF_DOCUMENT_TOKEN_TO_BE_REPLACED

Artistic director Timothy Beyer set the tone for the opening work by Jeremy Rapaport-Stein, appearing like the floating head of the Wizard of Oz in a quasi-film noir introduction. Beset with a parched throat, he turned the emcee job over to a ventriloquist’s dummy, who carried on in time-honored vaudeville style while Beyer drank a glass of water. END_OF_DOCUMENT_TOKEN_TO_BE_REPLACED