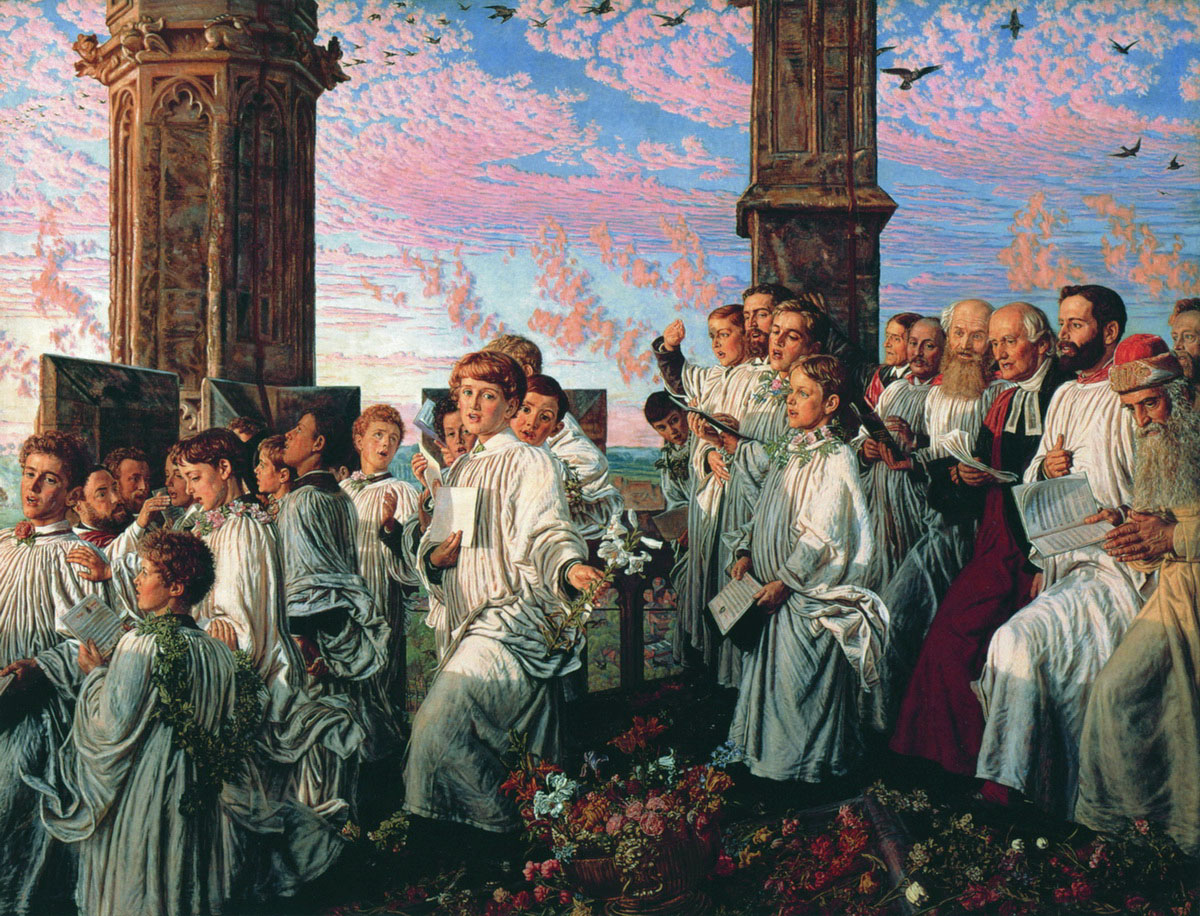 A variety of traditions, both religious and secular, are associated with the first day of May in most cultures that have slogged through months of winter and are more than ready to celebrate the return of balmy breezes and the reflowering of the earth.

One tradition that’s persisted for over 500 years in England is the May Day morning singing of hymns and madrigals by the Magdalen College Choir from its iconic tower in Oxford (pictured here in a painting by William Homan Hunt).

A brief video puts the celebration in context among appearances by May Day Morris Men and a pagan band, and the Choir’s own video from 2016 documents the event from the perspective of the singers. COVID-19 forced the ceremony to go virtual in 2020, but  this news item from the College tells how the Choir found an ingenious solution for May 1, 2021.

In a delayed response to the adoption in 1899 of May 1 as International Workers Day by the socialists and communists of the Second International, the Vatican created a second religious holiday in 1955 in honor of St. Joseph the Worker.

And how did “Mayday” become an international distress call? Frederick Mockford, a radio officer at London’s Croydon Airport introduced the idea in 1923 because it sounded like the French phrase m’aider (help me).

Out-of-doors events on Saturday include the YSU Wind Ensemble and Horn Choir on Harrison Commons in Youngstown. On Sunday, enjoy al fresco performances by the Oberlin Gospel Ensemble, and the Oberlin Chamber Singers.

One local in-person performance is on the docket: Sunday’s concert by the Dana Ensemble at the DeYor PAC in Youngstown, featuring orchestral reductions by the Schoenberg circle and the premiere of a new work by Jamie Wilding.

Everything else remains online. On Saturday, organist Jan Kraybill in Akron, the Dana Piano Trio, Oberlin Large Ensembles (including a premiere by student composer Natsumi Osborne), CWRU jazz ensembles, and broadcasts from the Detroit Symphony, 92nd Street Y, Friends of Ringwood Chamber Music (Jasper and Jupiter Quartet, and Tulsa Opera (commemorating the centennial of the 1921 Tulsa Massacre. On Sunday, tune in for the Callisto Quartet from Caramoor, low instruments from the Louisiana Philharmonic, BW Men’s Chorus, Russian Duo from Music from the Western Reserve, and an all-Scriabin piano recital from Oberlin by Jiaqing Luo.

In the interest of highlighting some lesser-known figures whose anniversaries pop up on this weekend’s calendar, we’ll acknowledge in passing the demise of Antonín Dvořák on May 1, 1904 (for whom a national day of mourning was declared), Giacomo Meyerbeer (who died with his boots on during rehearsals for his opera, L’Africane on May 2, 1864), and Armenian composer Aram Khachaturian (who died in Moscow on May 1, 1978), the latter with a performance he led in 1972 of his Piano Concerto in D-flat with Nikolai Petrov at the keyboard — a piece that we’d like to hear programmed more frequently).

We’ll also light candles for the birthdays of English composer Alan Rawsthorne and Austrian-American opera director Kurt Adler, both on May 2, 1905, as well as for Belgian conductor Philippe Herreweghe in 1947, and Russian conductor Valery Gergiev in 1953.

In more detail, let’s toast the birth anniversaries of two composers best known for their church compositions — an important but often overlooked stream in the great ocean of music. 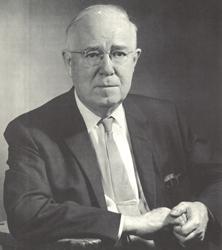 Leo Sowerby, born on May 1, 1895 in Grand Rapids, Michigan, figured prominently in the musical life of Chicago, where his works appeared regularly on Chicago Symphony programs, but is remembered today mostly for the music he wrote for St. James’ Church (later Cathedral) where he served as organist and choirmaster from  1927. In 1962, he retired and became founding director of the College of Church Musicians at Washington Cathedral, a position he held until 1968, when he died at Port Clinton, Ohio, enroute to Camp Wa-Li-Ro in Put-in-Bay, the summer choir camp where he had taught for many years.

(In summers, Sowerby also taught at the Evergreen Conference for Church Musicians in Colorado, where I had the honor of participating in his composition class while in high school. He recommended my Four Evening Orisons to his publisher, H.W. Gray, and they may still be in print.)

Sowerby won the 1946 Pulitzer Prize in Music for The Canticle of the Sun for chorus and orchestra, premiered by the New York Philharmonic and the Schola Cantorum in 1945 at Carnegie Hall (and performed here by Caros Kalmar and the Grant Park Orchestra and Chorus of Chicago in 2011).

Among the composer’s virtuosic works for the organ are Pageant (played here by Alan Morrison), and his Symphony for Organ (whose final movement, Passacaglia, is performed here by Tate Addis at Yale’s Woolsey Hall in 2015). Sowerby also wrote an engaging Classic Concerto for organ and strings, performed here by Rolf Karlsen and the Oslo Philharmonic under William Strickland. 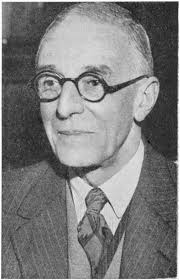 On the other side of the pond, English composer and organist Sir Edward Cuthbert Bairstow died in York on May 2, 1946, where he had served as organist of York Minster since 1913, replacing T. Tertius Noble, who had been hired away to New York to become the first music director of the newly-built St. Thomas Church on Fifth Avenue.

A lecture by Sir Francis Jackson, his successor at York, treats his legacy first-hand. Otherwise, Bairstow’s prickly personality was the subject of many stories, including one about the time when he heard a woman’s voice issuing from the nave of the cathedral and went to investigate. “What do you think you’re doing?” he asked. “I didn’t mean nothing by it, Sir, I was just lifting my voice in the house of the Lord.” “House of the Lord, indeed! Madam, this is York Minster.”

Here are a few tastes of Bairstow’s church music: the exquisite miniature, I sat down under his shadow, sung by Quire Cleveland under Ross W. Duffin, his dramatic Let all mortal flesh keep silence, performed by St. Alban’s Cathedral Choir under Barry Rose, and the Andante serioso from his Organ Sonata in E-flat played by sometime Clevelander Graham Schultz at the Church of the Incarnation in Dallas.

To end with another remarkable piece of church music, one composed by Alessandro Scarlatti, born on May 2, 1660 in Palermo, here’s his Stabat Mater performed by Prague’s Collegium Marianum. Just to show that talent ran in the Scarlatti family, here’s his son Domenico’s setting of the same text for ten solo voices and continuo, performed by Ars Nova Copenhagen under Paul Hilliard.