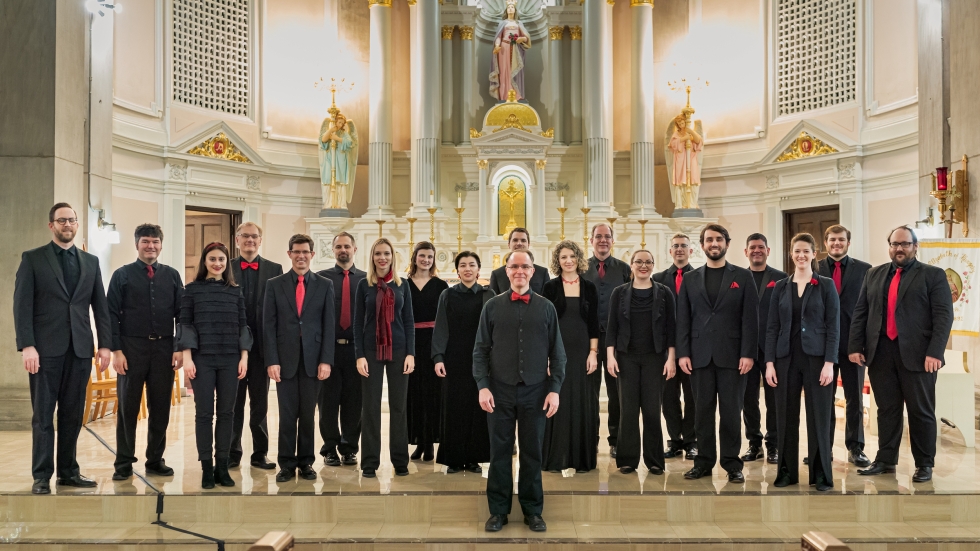 . The concert calendar has an expansive list of performances.

There appears to be something for everyone this weekend, which offers music from the very old to the very new played by chamber groups, choruses, orchestras, brass and percussion ensembles, and soloists. Check our Concert Listings page for details.

At 7:00 pm – City Music Cleveland’s  Pantheon Ensemble plays Mendelssohn’s Piano Sextet, Mozart’s Divertimento K. 136, and the premiere of Füsun Köksal’s Music for String Quintet & Piano at Shrine Church of St. Stanislaus. The program will be repeated on Sunday at 3:00 pm at Lakewood Congregational Church — both in-person and online. The concerts are free and masks are required.

At 7:30 pm – Quire Cleveland, under the direction of Jay White will present “Resonant Glory: Music for Grand Spaces” at the Cathedral of St. John the Evangelist. Their program will also be presented on Saturday at 8:00 pm at St. Noel Church in Willoughby Hills and on Sunday at 5:00 pm at St. Sebastian Church in Akron. The concerts are free. Read a preview article here.

Also at 7:30 pm La Tanya Hall leads the Oberlin Gospel Choir in Finney Chapel. The program pays tribute to the Fisk Jubilee Singers as well as to the Oberlin Black Ensemble, featuring the return of the OBE’s co-founders, vocalist Charles Woods, and pianist Everett Williams. Free.

Many anniversaries to take note of this weekend. We’ll throw darts and pick three of them.

On May 13, 1842,  British  composer Sir Arthur Seymour Sullivan entered the world in London. Sullivan exhibited his musical prowess early on — at the age of eight he composed his first anthem and soon after became a soloist in the boys’ choir of the Chapel Royal. At age 14 the Royal Academy of Music awarded Sullivan the first Mendelssohn Scholarship, allowing him to pursue his musical studies at the Academy as well as the Leipzig Conservatory. His early works include a ballet, a symphony, and a cello concerto, as well as some 80 popular songs, parlor ballads and hymns.

Today Sullivan is best known for his fourteen light opera collaborations with librettist William Schwenck Gilbert. This summer, Ohio Light Opera returns to live productions, and will give six performances of G&S’s The Pirates of Penzance at The College of Wooster beginning on July 7.

OLO writes in their brochure: “Building on the success of H.M.S. Pinafore, but trading — as their satirical focus — the rigors of naval discipline for the obligations of duty, G&S manage to burlesque their normal share of popular institutions, including the army, the police, and operatic sopranos…The engaging musical score includes some of the catchiest music in operetta:  Mabel’s pyrotechnic “Poor, Wandering One”; the tongue-twisting “I Am the Very Model of a Modern Major-General”; “A Policeman’s Lot”; and “With Catlike Tread,” which, decades later, was given new words as “Hail, Hail, the Gang’s All Here.”

In addition to providing musical undergirding for Gilbert’s penetrating satire, Sullivan wrote his own musical parodies of hallowed musical forms, like his sendup of the Renaissance madrigal in “Strange Adventure” from Yeomen of the Guard, and in some of his serious compositions reflected the spiritual crises of the Victorian era. Commentators have found his a cappella song, The Long Day Closes, to be as much of a valedictory to the 19th century as many of Mahler’s songs and symphony movements.

German conductor Otto Klemperer, born on May 14, 1885 in Breslau, was forced to leave his post at the Hamburg Opera in 1915 after a scandal involving a recently married soprano. In popular culture, his son Werner probably eclipsed his fame as the actor who played the bumbling Colonel Klink in the CBS television series Hogan’s Heroes. But back to the concert world, here’s Otto Klemperer’s take on the finale of Beethoven’s Ninth Symphony with the New Philharmonia Orchestra. (Werner Klemperer is playing in the second violin section).

Italian composer Claudio Monteverdi was born either on May 15 or 14, 1567 in Cremona, later serving the household of the Duke of Mantua and the “most serene republic” of Venice, and launching the early Baroque period with a flurry of inventive works including opera, church music, and madrigals.

Jeannette Sorrell and Cleveland’s Baroque Orchestra, Apollo’s Fire, have programmed much of Monteverdi’s music in various halls in Northeast Ohio as well as across the U.S. and Europe. Here are a few videos from their archives:

We’ll start with a collection of secular works from the 2020 program, “L’AMORE — Love and Rejection in Old Italy,” performed at St. Paul’s in Cleveland Heights. It begins with a piece by Barbara Strozzi, then goes on to selections from L’Incoronazione di Poppea, and the Scherzi musicali. Watch here.

One of the composer’s monuments is the Vespers of 1610, written for the Mantuan court, and which has required some reassembly, having been published as individual pieces. One of the motets editors haven’t quite known what to do with but has to be included because of its powerful declamation, Duo Seraphim was sung by tenors Jacob Perry, Nathan Hodgson and Nathan Dougherty at First Baptist Church in October, 2019. Watch here.

Like all Vespers services, Monteverdi’s setting concludes with the “Magnificat.” His bravura setting covers many of the stylistic bases available to the composer, including wonderful echo effects. (I heard a performance at the Edinburgh Festival where the conductor had the echo tenor sing his part from the Gents’ just off the balcony of the performing venue — a perfect location.)

Apollo’s Fire performs the “Magnificat” here in Trinity Cathedral in November of 2014, and will open their 31st season with a complete performance of the Vespers in the fall.

Finally, here’s an exquisite performance by tenor Karim Sulayman of Monteverdi’s Si dolce è il tormento (How sweet the torment) from an Apollo’s Fire “Blues Café 1610” performance on Valentine’s Day of 2015 at the Music Box Supper Club in Cleveland.

The cimbalom was the feature of the show, an instrument capable of taking on many personas. Its performer, Chester Englander, has shaped his career around the instrument, and has inspired composers to write more repertoire for it, some of which was presented on the program. END_OF_DOCUMENT_TOKEN_TO_BE_REPLACED

You wouldn’t expect that acoustic from a glance at the nave, which is wide and long, but not especially lofty. But when I guest conducted a local amateur choir and professional orchestra in Beethoven’s Mass in C there a few years back, during the first rehearsal we released the final chord of the “Gloria” and listened in astonishment for the next several seconds. The sound continued to roll down the space like the big wave that surfers dream about. END_OF_DOCUMENT_TOKEN_TO_BE_REPLACED