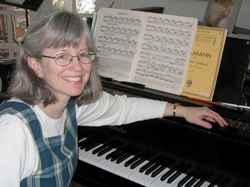 Music programs play a vital role in the life of church congregations. For many, church music programs provide people of all ages with the rare opportunity to actually participate in the arts on a regular basis. And many surveys have shown that an active and engaging music program is one of the things that attracts people to a church, and keeps them coming back.

But without a doubt, it is the dedicated music directors that are the lifeline of the music programs. Church music directors work tirelessly to keep the programs vibrant and relevant to the wishes and desires of a congregation. For 25 years Anne Wilson has been the musical lifeline to Forest Hill Presbyterian Church where she has served as organist since 1989 and Director of Music since 1993. 25 years in one place? “Forest Hill is a good fit for me, it’s very progressive and interested in Social Justice issues,” Wilson said during a recent conversation. “We’ve also had really good leadership so I’ve been quite content.”

On Friday, May 9, beginning at 7:30 pm, the community is invited to attend a free celebration in honor of Anne Wilson’s 25 years of service to Forest Hill’s music ministries. The evening includes a concert of music composed and conducted by Anne and features three of the four Forest Hill choirs: Descant (Grades 1 through 5), Sine Nomine (Grades 6 through 12) and Chancel Choir. The Voices in Bronze Bell Choir will also perform.

Guest instrumentalists include renowned concert organist and former Wilson student, Tom Trenney. “Tom is playing a Toccata that I wrote as well as conducting. He is the guest of honor. And yes, I taught him from age 13 until 18.” Wilson jokes that she didn’t have much to teach him, just give some guidance. Cellist Derek Snyder and trombonist, composer and arranger Paul Ferguson — along with a trombone quartet from Case Western Reserve University –will also join in the musical fun.

Paul Ferguson, who serves as director of Jazz Studies at CWRU, recalled the origins of the trombone quartet during a telephone conversation. “About 20 years ago Anne made an arrangement for cello quartet called Fantasy on Nursery Rhymes. It’s a humorous arrangement that includes children’s tunes like Row, Row, Row Your Boat, Lullaby and Pop Goes the Weasel. Although it’s for a quartet of cellos it works quite well on trombones. I’ll be joined by three of my students from Case. It’s going to be a lot of fun.”

Ferguson, who just happens to be Wilson’s brother, says they did come from a musical family. “I remember Anne always practicing the piano and my mom was always playing Brahms symphonies while talking care of the house. And my brother is musical as well.” And like her brother, Wilson is also a prolific composer and arranger, so there will be plenty of music to choose from for Friday’s concert. “The fun part for me is that it’s a concert of all music that I have composed,” Anne said, and a lot of people don’t know that I do that.”

Her compositions have been performed at the Aspen Music Festival, the Julliard School, The Museum of Women in the Arts (D.C.), the Amsterdam Cello Biennale, the Cincinnati Classical Guitar Workshop, and American Guild of Organists conventions. Her compositional catalogue includes works for cello, cello and percussion, and a piano trio. She has composed a number of sacred and secular choral works and two pieces for classical guitar including one written for Jason Vieaux. There are also works for handbell choirs, brass ensembles and jazz ensembles, as well as arrangements for organ and piano, and two works for steel drum ensemble.

Anne Wilson’s impact on the area’s musical life goes far beyond Forest Hill Church. She serves as rehearsal pianist for Apollo’s Fire: The Cleveland Baroque Orchestra, and as Staff Accompanist at Case Western Reserve University. She has performed with The Cleveland Orchestra and toured with them on their 2012 West Coast and Carnegie Hall tours. She also serves as a docent at the Cleveland Museum of Art and particularly enjoys giving tours that include recorded music related to the art.

A reception will immediately follow the concert, which will be recorded and filmed, with copies of a commemorative CD, DVD, and photograph package available for purchase. All proceeds will help keep Wilson’s music playing through the Friends of Forest Hill Music fund.

END_OF_DOCUMENT_TOKEN_TO_BE_REPLACED

Supported by engagingly, yet simple staging by Cara Consilvio, a well-prepared cast of singers told the archetypal story of Cinderella with charm and flair. Framing the production was  a sparse but colorful set and wonderful lighting by Dave Brooks. END_OF_DOCUMENT_TOKEN_TO_BE_REPLACED