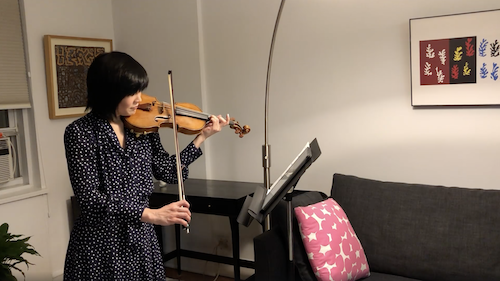 One thing that’s interesting about the live-streamed, audience-less concerts that are happening during the pandemic: they can vary wildly in length.

Streamed live over Facebook and Instagram, and still available on-demand through YouTube, this was the first concert of “Alone Together,” Koh’s new commissioning project and performance series in support of composers during the COVID-19 crisis. New concerts take place on Saturdays at 7:00 pm Eastern Time.

Each premiere will be a “micro-work” for solo violin. Half of the composers, most of whom have salaried positions or other forms of institutional support, have agreed to donate their work. Each of those artists is also recommending a freelance composer to write a short piece on paid commission from the ARCO Collaborative, a nonprofit founded and directed by Koh that advocates for inclusivity in classical music.

For this past Saturday’s performance, Koh played four pieces with only a short silence between them.

The captivating opening was Wang Lu’s story-like Hover and Recede. Its structure — short gestures separated by silence, like gusts of wind — allows you to clearly follow the drama as it escalates to the end, where it teeters on an edge with whispery high notes. Koh’s pacing was masterful. 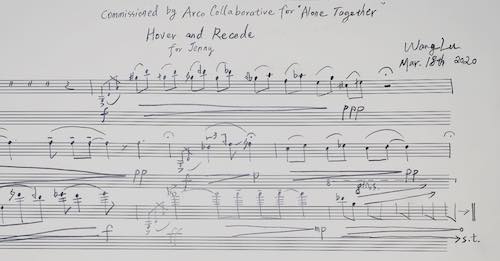 Joungbum Lee’s Hovering Green was commissioned at the recommendation of Wang. The longest piece on the program at about three minutes, it alternates between spurts of momentum and a halting lack thereof. The fascinating climax brings motion and stillness together: a beautiful melody played over an airy pedal tone.

Recommended by Vijay Iyer, composer Morgan Guerin contributed his minute-long Together, But Alone (In Quarantine), which brings instant energy with its racing thoughts. A patch of elegance returns to more jagged gestures, and a minor chord ends it compellingly.

Introducing a mute was the perfect choice for Iyer’s For Violin Alone. The writing is both contemplative, angry, and restrained, a complex mix of emotions that’s not easy to put across — unless you’re Jennifer Koh.

Iyer’s final cadence borrows from the jazz standard Alone Together, as he explains in one of the short videos that Koh posted on social media leading up to Saturday. In those clips, the composers talk about their new pieces and share in a very honest way what it’s like to write music during the pandemic.

It can be hard to focus these days. You might think that a 10-minute concert is a good solution, but beware: blink once and you miss a large percentage of a short work. It’s helpful not only to take in the interviews and scores that Koh is sharing in advance, but also to watch the performances again. As is always the case with art — but especially right now — you surely missed something.

Jennifer Koh is a graduate of Oberlin College, as well as the recipient of awards such as Musical America’s 2016 Instrumentalist of the Year, an Avery Fisher Career Grant, and the top prizes in Moscow’s International Tchaikovsky Competition and the Concert Artists Guild Competition.

The following is a list of commissioned composers and their respective recommending/donating composers who are taking part in “Alone Together”:

To be announced — Kati Agócs

To be announced — Marcos Balter

To be announced — Du Yun

To be announced — Augusta Gross

Bianca Ciubancan (16, Chicago, Ill) began the afternoon session with Jessie Montgomery’s Rhapsody No. 1 for solo violin. Playing with a warm, rich sound, Ciubancan brought a thoughtful, intimate approach to the work, highlighting each of its distinct episodes. END_OF_DOCUMENT_TOKEN_TO_BE_REPLACED

END_OF_DOCUMENT_TOKEN_TO_BE_REPLACED

Franz Schmidt’s Symphony No. 4 showcased the ensemble, under guest conductor Jonathan Berman, in the standard conventions of a not-so-standard piece. But at the start of the program, the musicians were equal partners to pianist Cédric Tiberghien, whose playing could be as bold as the full orchestra or as intimate as any instrumental solo. END_OF_DOCUMENT_TOKEN_TO_BE_REPLACED