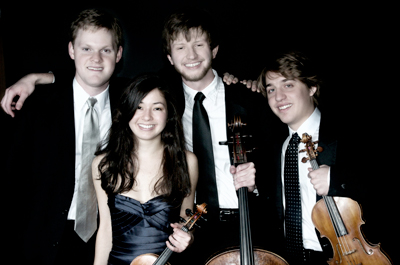 On Friday, March 20 and Saturday, March 21at 7:30 pm, GroundWorks DanceTheater will bring its Spring concert series to the Breen Center for the Performing Arts at St. Ignatius High School. The performances will include the world premiere of The Rub, choreographed by artist-in-residence Robert Moses, and the reprise of Current Frame, choreographed by artistic associate Amy Miller (in collaboration with Kathryn Wells Taylor, Gary Lenington, Felise Bagley and Damien Highfield). The evening will also include the world premiere of House of Sparrows, choreographed by Groundworks executive artistic director David Shimotakahara in collaboration with New York-­based Aeolus Quartet, and Austin-based composer Steven Snowden.

House of Sparrows is set in scenes inspired by letters and photographs illustrating the upheaval of domestic life during the Civil War through individual experiences. “The development of the project was a collaborative process,” Aeolus Quartet violinist Rachel Shapiro said during a telephone conversation. “We used a creative blog that both David Shimotakahara and Steven Snowden contributed to. When they hit upon the fact that the sesquicentennial of the end of Civil War was coming up, we thought it would be worth reflecting on the different aspects of domestic life during the Civil War. Once the idea was born, the rest of the project flowed out of it.”

Formed at the Cleveland Institute of music in 2008, the Aeolus Quartet (violinists Rachel Shapiro and Nicholas Tavani, violist Gregory Luce, and cellist Alan Richardson) are currently the Graduate Resident String Quartet at the Juilliard School. The Quartet were the Grand Prizewinners at the Plowman Chamber Music Competition and the Chamber Music Yellow Springs Competition. And they won the Silver Medal at the Fischoff International Chamber Music Competition, all in 2011.

In 2013 the Fischoff National Chamber Music Association honored the quartet with the Educator Award in acknowledgment of the positive impact their educational efforts have had in diverse communities. “This is something we are especially proud of,” Shapiro said, adding “We are really excited to be working with David Shimotakahara and everyone at Groundworks. It’s our first time of doing a project like this and it’s very exciting for us.”

How did the collaboration come about? “It’s an interesting story, and I believe the initial contact was through our management. They had met David at some point last year, and planted the seed of the idea of doing a collaboration. Groundworks is a small ensemble with a lot of artistic integrity which lends itself perfectly to live chamber music so it’s not surprising that the collaborative process has been so natural. David’s vision, and the way he choreographs to the music, which was also new to us, has been so organic, and in line with the way we identify ourselves as a quartet. It’s been great to see it all come together.”

Shaprio said that throughout the collaboration, there has been something very special about the communication between the quartet and the dancers. “David’s choreography grows so naturally out of the sounds we’re producing, and to watch it all come together on the stage as been a powerful thing.”

The selection of Steven Snowden as the projects composer was also an easy decision to make. “We’ve had the great pleasure of working with Steve a number of times over the years. We first met him when we were the Graduate Quartet-in-Residence at the University of Texas, Austin. I think he was still a student as well, but our paths somehow crossed. Not only is he a great guy, but his music, not to use a cliché, struck a chord with us.”

In fact, the Aeolus enjoyed Snowden and his music so much that when they received their first grant from the National Endowment for the Arts in conjunction with University of Texas, Snowden was at the top of their list of composers to involve. “The grant was to be used for performances of American music. We also used some of that money to record an album of music all by living American composers. We also commissioned two short companion pieces, one by Steve and one by Alexandra Bryant.

“Steve’s piece, Appalachian Polaroids consistently catches people’s attention. It does have an Appalachian flavor to it with its roots-sounding tonality. We really love it. When this collaboration came up, and we were thinking that we wanted to have music that could be danced to, we thought that Steve’s music would be perfect. It’s very American in a raw way.”

END_OF_DOCUMENT_TOKEN_TO_BE_REPLACED

Rodgers & Hammerstein’s Cinderella was originally produced for television in 1957 — seven years after the animated Disney film was released — and starred Julie Andrews. According to the Rodgers & Hammerstein website, it was viewed by over 100 million people. END_OF_DOCUMENT_TOKEN_TO_BE_REPLACED

The story line has its origin in an 1855 play and an 1842 farce that Thornton Wilder mined for his 1938 play The Merchant of Yonkers. When that turned out to be a flop, in 1954 Wilder made the crucial decision to re-center the show around the character of the legendary marriage broker Dolly Gallagher Levi and renamed it The Matchmaker. END_OF_DOCUMENT_TOKEN_TO_BE_REPLACED

The Dodero Center for the Performing Arts at the Gilmore Academy in Gates Mills is one feature of an impressive campus. The auditorium is shallow, the stage is deep, and the ensemble played without a shell. Throughout the program, the sound, especially in instruments’ lower registers, tended to disappear. END_OF_DOCUMENT_TOKEN_TO_BE_REPLACED