To enter the world of Baroque opera is to abandon realism, especially with Handel’s magical Alcina, his 1735 recasting of the bizarre inventions of Italian chivalric romance. Almost every one in the opera is disguised, transformed, or betrayed — Bradamante, a young maiden dressed in her brother’s armor, pursues her fiancé Ruggiero, whom she discovers snuggling with the sorceress Alcina; Astolfo, a hapless warrior of whom we learn little except that his son Oberto very much misses him, has been turned into a lion quite reminiscent of Bert Lahr in The Wizard of Oz; a second sorceress (Morgana, sister to Alcina, it turns out) happily betrays her lover Oronte in the very first scene as she falls in love with Bradamante . . . and I could go on.

It’s a good thing that there was no plot quiz at the end of CIM’s lively production of Alcina, as I am fairly sure that most of the audience would have done dismally. Derived from the fertile imaginations of the renaissance poet Ariosto, the plot cast us in a state of constant uncertainty about who’s who, and who’s with whom at any particular moment. Love relationships were never stable, turning on a dime from swoony bliss to maddening doubt and fierce jealousy. The most frequent epithet, usually spat out with venom, was traditore (traitor)!

Unlike later grand opera, Baroque opera proceeds in a sequence of distinct solo arias, each with its own situation and mood. The English supertitles in CIM’s production went some way to helping the audience eke out a bit of the plot, but a printed synopsis would have helped much more. And when the arias are the heart of the matter, as in Handel, a list of them (as is usually given in programs for musicals) would have helped the audience stay in sync with the convoluted storyline. 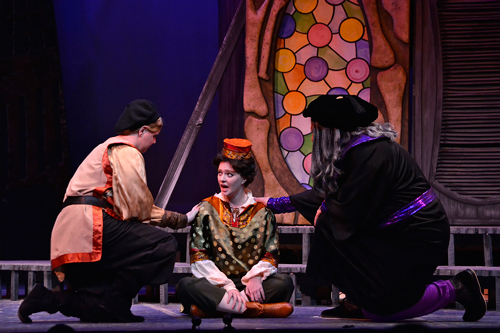 Handel’s unstoppable gift for melody makes of these arias a treasure-trove of vocal delight. In Saturday’s cast, undergraduate mezzo-soprano Amber Fasquelle was particularly successful as Ruggiero. Yes, Ruggiero is a man, but the part was written for castrato, so it’s now sung by a mezzo or a counter-tenor. Her rendition of the famous “Verdi prati” (that’s “verdi” in the sense of verdant, not Giuseppi) captured the heartfelt sadness of the song, as Ruggiero realizes what he has lost in awakening from Alcina’s deceptions. Fasquelle’s clarity of diction, vocal power, and control of Handel’s rapid passagework came to the fore in a later aria, “Sta nell’ ircana,” in which Ruggiero imagines himself a fierce tigress about to pounce on an unlucky hunter.

The title role was sung by soprano Kaitlin Borden, a master’s degree student. The part is a demanding one with its many extended and contrasting arias, and Borden brought to it an affinity with Alcina’s sadness. Particularly moving was her “Ah, mio cor,” sung (at a strikingly slow tempo) with a sustained vocal intensity. Borden gave us an insight into her character’s melancholy trajectory from power and love to exposure, abandonment, and eventual dissolution.

Deception, jealousy, and betrayal inevitably fuel revenge, and mezzo Erika Rodden as the fierce Bradamante (disguised, remember, as an armed warrior) gave a memorable performance of her revenge aria, “Vorrei vendicarmi.” Of all Saturday’s cast, Rodden seemed the most comfortable with the bel canto demands of melisma (the extension of a single syllable over several measures in rapid passagework).

As the boy Oronte, searching for his father (the lion that I mentioned above), sophomore Emily Uddenberg came into her own in the second half with a striking rendition of “Barbara!” (not a name, but Italian for barbarian), her fierce attack on her former patroness, Alcina. 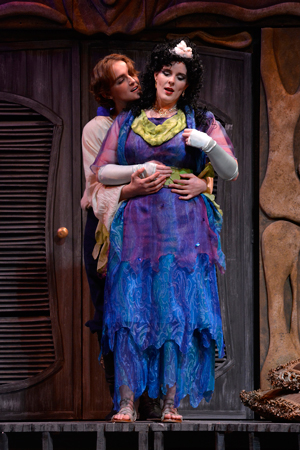 Soprano Rachel Kunce made a sprightly Morgana. Beginning a bit stiffly, she warmed into her voice by the time she got to the famous Act One closer, “Tornami a vegghiar.” Towards the end of the evening, she was quite moving in her d-minor aria “Credete al mio dolore,” in which, accompanied by a beautifully played obbligato cello, she draws her offended lover to a reconciliation. This passionate music, though, was mitigated by unnecessary stage business which confused at least this viewer: was Morgana being sincere or ironic, and if the latter, why?

Baroque arias in da capo (“from the top”) form (as almost all are) present challenges, in that the first section of the ABA form must be repeated at full length, after a middle section in a contrasting key or mood. What kind of stage business do you give the actors to keep the audience’s interest, when the music and words return so inexorably? David Bamberger’s direction sometimes found the right variant for the da capo action, but all too often the return seemed repetitive.

The other challenge of the return is for the singer: how to vary the music the second time through? We know that Handel’s singers were skilled at using spontaneous ornamentation (adding to or changing Handel’s written music) to fit the dramatic action. For the most part, the ornaments in this production sounded too prescribed to be dramatically effective. And too often, the variants pushed the women’s voices too high, beyond their best vocal range. 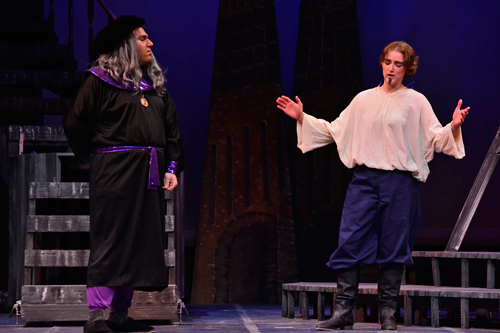 The CIM orchestra, conducted by CIM opera regular Harry Davidson, brilliantly supported the singers. Harpsichordist John Simmons and principal cellist Julian Muller supplied flexible and energetic continuo lines. As might be expected, CIM’s first violin section was accurate and often exciting in their demanding accompaniment figures. The orchestra played with a preponderance of modern gestures, including a persistent vibrato: more attention to Baroque style, even on modern instruments, would have been welcome.

The stage set, by Dave Brooks, was a surrealist, Candy Land fantasy (inspired, apparently by the work of Gaudí), inventive but more a mélange of separate elements than a coherent whole. Wheeled staircases were moved about the stage by Alcina’s beast-lovers, to provide access to various upper-level platforms. Possibly they were intended to evoke the more fluid magic staircases of Hogwarts, but in this case they seemed merely earth-bound. 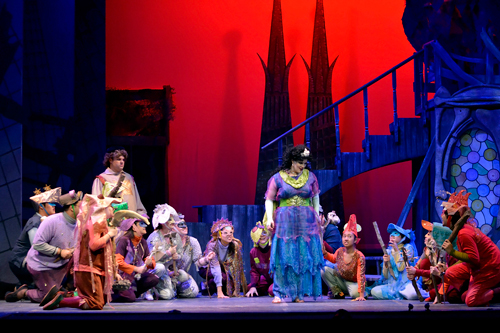 A chorus of over twenty accomplished its minimal singing role with aplomb, and costumed as various beasts and other natural objects (a rock, a wave, even) provided a zany, Where-the-Wild-Things-Are energy to the action. Doffing their beast garb for the final chorus, they sang happily of an ending that restored true love and rationality to most of the protagonists. The sorceress Alcina, however, was not allowed in on the happy ending: she had vanished in a startling puff of green smoke a few minutes earlier. She did return, happily, for the warm curtain calls and applause.

Photos by Leigh-Anne Dennison, courtesy of the Cleveland Institute of Music.