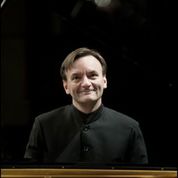 Interviewing Stephen Hough is a daunting task. Besides being one of the most successful, talented, and intelligent pianists of his generation, he composes, is a visiting professor at Juilliard and the Royal Academy of Music, writes wide-ranging regular blog posts for The Telegraph and articles for other publications, has published a book, The Bible as Prayer, writes poetry, and has given a solo exhibition of his paintings in London. Where do you even start?

Luckily Hough is an amiable, disarming conversationalist, exuding the air of a well-mannered English gentleman. (At one point, he enthused over a hat store in Chicago, recommending it as “a wonderful place, well worth seeing.”) He is extraordinarily genial, both in the sense of being friendly and displaying genius. And he is an engaging musician, who will perform Liszt’s First Piano Concerto with John Storgårds conducting The Cleveland Orchestra on July 26 at Blossom Music Center.

Liszt is a fitting match for Hough, since both are technically gifted pianists, composers, writers and Roman Catholics. “Liszt was a great, great musician and had an extraordinary mind, and I think you get that in his music,” Hough told me over the phone from Santa Barbara, California, where he was giving a master class and playing his own second sonata in a recital. “The way he puts the first concerto together is very radical and clever. It’s a fantastic, modern piece of writing in structure.”

Hough also shares a playing style with his Hungarian predecessor. “The ideal was not to be pouring with sweat at the piano, it was to be like a sleek racehorse. The style prides a certain kind of elegance and virtuosity.”

That doesn’t mean empty fireworks, however. “There’s a lot of humor and fun [in the first concerto],” Hough said, “and Liszt enjoying the sheer exhilaration of playing lots of fast notes. But it’s never completely superficial, there’s always a core. I think the slow section of this piece is one of the most beautiful nocturnes that anyone ever wrote.”

With his vast array of activities, it’s hard to pinpoint any one focus of Hough’s, but he has been much involved with Liszt lately. Besides performing the concerto, he is also touring with the massive b minor Sonata, and released an app exploring that “serious, philosophical masterpiece” in conjunction with Touch Press last year. 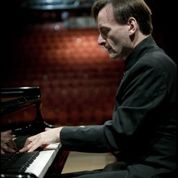 “Harmonically, Liszt is one of the most interesting composers of the 19th century, because he really created the three different styles that became 20th century musical language. He was one of the very first to discover impressionistic colors on the piano, and the late pieces have the primitivism which became Bartok and Stravinsky. Then earlier you also have this Wagnerian chromaticism, which Wagner, his son-in-law, certainly learned from. He always adds some garlic, or maybe paprika would be a better ingredient, that twists his music into something interesting.”

That “little bit of garlic in the sauce” is what interests Hough in all of his pursuits, especially music. “You can even go back to folk music. The great touching folk music is where there’s a twist in the harmony, in the melody, which just pulls at the heartstrings. But it only does so because it’s in the context of something normal. Everything in life that moves me is like that.”

Hough’s own compositions try to achieve such twists by straddling tonality and atonality, pitting the two against each other. “There’s a yearning in one for the other. To me, what music is all about,” he said.

With that yearning comes expressivity. “I want the pieces that I write to go very deep inside. None of my serious pieces have been written without a tear during the process, though not always a sad tear.” 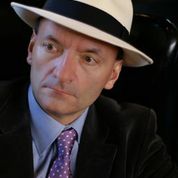 But continuing to follow Liszt’s example and write a piano concerto of his own doesn’t interest him. Instead, he is working on a third piano sonata for the Barbican next autumn, and wants to write a violin concerto “at some point.” He will also continue to focus on other composers’ concertos, joining conductor Andris Nelsons to record the Dvořák and Schumann piano concertos, which he has been touring, and playing his first cycle of the Beethoven concertos next season. Another recording highlighting Hough will also soon be available: his Missa Mirabilis with Andrew Litton conducting the Colorado Symphony Orchestra, to be released next year.

“There’s lots to keep me busy, to keep me out of mischief,” he laughed. But it probably wouldn’t matter if he didn’t have lot of projects on the horizon. Judging from his other pursuits, even his mischief would be fascinating.

Jackson began the program with a recitation of Langston Hughes’ poem “Helen Keller” — the first of five poems by Hughes that served as interludes between each piece on the first half. END_OF_DOCUMENT_TOKEN_TO_BE_REPLACED

Pianos with pins and tape on strings, a bass drum and tam tam, crotales, Almglocken, and vibes. Microphones were hooked up all around the instruments. The feed was sent to speakers around the room. Lighting designer Nicholas Houfek hung incandescent globes over the arrangement of instruments from thin black wires stretching across the beams. END_OF_DOCUMENT_TOKEN_TO_BE_REPLACED

From the podium, Elim Chan set an ambitious tone for the evening. The rising star conductor, here in her Cleveland Orchestra debut, has a commanding style, and every twist and turn in Saturday’s performance tracked closely with her baton. END_OF_DOCUMENT_TOKEN_TO_BE_REPLACED