A live gerbil as compositional material—it’s the most recent suggestion for a “secret musical ingredient” on the Iron Composer competition’s Facebook page, and contest director Joe Drew, for one, is open to it. “People say stuff, and they think it’s too crazy, but I could see a scenario where that would work,” said Drew over telephone as we talked about the upcoming 8th installment of Iron Composer, a project of Analog Arts. The competition will take place September 26 and will culminate in a free public concert at 8:00 that evening at the Great Lakes Science Center on Erieside Avenue in downtown Cleveland. Emceed by Mark Satola of WCLV, the concert will also be broadcast live on the station (104.9 FM) and on wclv.com.

If you’re not familiar with Iron Composer, the Iron Chef-inspired composing contest unveils an instrumentation and a secret ingredient in the morning, then gives five composers just five hours to craft compositions around those specifications. After receiving thirty minutes of rehearsal each, the pieces are performed that same night and judged based on a set of criteria including their use of the secret ingredient and their originality. This year’s winner will come away with $500 in cash as well as a $500 commission by Blue Water Chamber Orchestra for a new work to be performed during their 2014-15 season.

One big change is in store for Iron Composer this year: while Baldwin Wallace University has hosted the final concert the past five years, this year it’s moving to the Great Lakes Science Center as part of IngenuityFest, a setting which Drew hopes will open up the competition to greater experimentation. “Simple logistics have held us back from some of the ideas we’ve wanted to implement in the past. And that’s one of the things we’re talking about in pairing up with IngenuityFest. They’re tapped into kind of a different logistical universe than Baldwin Wallace is, so we’re hopeful that as the partnership progresses over the coming years, we can make some of these a-little-bit-more-outrageous ideas a reality.”

Not to say that what we’ve seen so far from the competition has been ordinary or dull in the slightest. Secret ingredients over the years have included a Monet painting (Impression, Sunrise), audience participation (clapping, foot tapping, humming, snapping, and whistling), and a collection of sticks and stones. Drew told me the story behind that last one, from the 2010 competition. 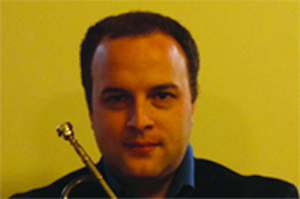 “It was one of those years where we just had not figured out what to do. I was taking a walk and I was like, ‘Oh my God, I’ll just grab some stuff from the riverbank.’ So I basically packed up the trunk of my rental car with all these sticks and stones and debris from the Rocky River, and we turned it into a sculpture on the stage. It ended up inspiring such a diverse selection of sounds from the composers. They all just had different ideas about how to approach it.”

That goal of diversity among the five compositions is connected to the competition’s selection process. “We assemble the finalists based on skill first,” said Drew, “but then we’re really focused on getting a diverse group together. So we don’t want four or five composers who just write avant-garde stuff. We’re thinking in terms of what’s going to keep an audience interested.”

That process narrowed down the applicants this year to five finalists (above, left to right): Jason Buchanan, a doctoral candidate at the Eastman School of Music; Michelle McQuade Dewhirst, Associate Professor of Music at University of Wisconsin-Green Bay; Charles Mason, chair of the composition department at the University of Miami’s Frost School of Music; Polina Nazaykinskaya, a doctoral student at City University of New York; and Gene Pritsker, founder and leader of “eclectic hip hop-chamber-jazz-rock-etc. ensemble” Sound Liberation. The five finalists will get a chance to discuss their music the night before the competition at the roundtable Finalist’s Forum at Baldwin Wallace Conservatory at 5:30 pm. BW will also host the writing period for the composers.

“We know how these people write based on what they submitted,” said Drew, “but individually within their own catalogs they’re all pretty diverse. For example, Gene Pritsker’s resumé is all over the place—he DJ’s, he plays bass in rock and pop stuff, he can write straight-ahead orchestral music. Polina Nazaykinskaya, on the other hand, is maybe the strongest in the classical vein out of all of them. Still there’s just no way to know how they’ll respond to what we put out there, and that’s part of why we invited them.”

It all adds up to a unique brand of contemporary music concert. “One of the challenges in presenting new music,” said Drew, “is that you work your tail off, and then 35 people come—if you’re lucky—and they sit there and stroke their chins. With Iron Composer we’ve found that people are on the edge of their seats.”

END_OF_DOCUMENT_TOKEN_TO_BE_REPLACED

The strings-only work by Berg has made relatively frequent appearances on the Orchestra’s programs. In 2021, the musicians recorded it for the In Focus series, and it appeared again on last year’s European tour. Friday’s rendition maintained the group’s characteristic light and effortless playing, each section blending as much as possible to echo the work’s original form as a string quartet. At fifteen minutes total, the piece is quite short, but the dense encoded musical meanings require some extra-attentive listening. Splitting up the three movements ensured that each one could be appreciated on its own. END_OF_DOCUMENT_TOKEN_TO_BE_REPLACED