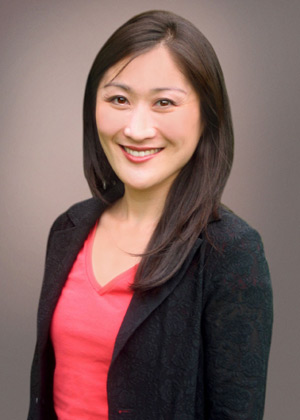 Google “Jung Eun Oh soprano” and you’ll turn up articles about a singer who earned three degrees at the Cleveland Institute of Music and has received rave notices about her vocal prowess. Google “Anna Rathbun financial” and you can read about a Harvard economics graduate who launched — and has now relaunched — a career in investment management.

Those are the two sides of a fascinating woman who will be featured in the next Stars in the Classics Summer Cabaret on Thursday, July 23 at 7:30 pm in the council chambers of the Orange Village Hall. On that occasion, Jung Eun Oh will join pianist Zsolt Bognár in three songs by Franz Liszt and Gioacchino Rossini’s “Una voce poco fa” from The Barber of Seville. Also on the program: music by Brahms and Mendelssohn, and tangos by various composers, played by violinists Yun-Ting Lee & Jeffrey Zehngut, violist Amber Dimoff, cellists Daniel Pereira & Ryan Louie & clarinetist Stanislav Golovin.

“I am continuing to use my Korean name, Jung Eun Oh, when I appear as a singer,” the soprano said in a telephone conversation, “but I wanted to take on my husband, Jeff Rathbun’s name in my role as a financial advisor. My Korean first name kept getting butchered a lot and there was some anxiety about pronouncing it. In money management, trust is everything, so I decided to use my middle name, Anna as a financial professional.”

Jung Eun Oh began her musical studies as a pianist. “I didn’t really start singing until I joined the Harvard Collegium Musicum under Jameson Marvin. I told him over coffee in Cambridge a couple of years ago that he taught me everything I know about musical line.” Oh began private study during her junior year. “It was really kind of a joke, because I only had a lesson once a month. I didn’t even know you could study voice as if it were a separate instrument,” she said.

After graduating with a degree in economics, Oh landed a job with an asset management company in Boston and continued to study voice through the New England Conservatory continuing education program. “I was at a crossroads,” she said. “I was curious about the voice as an instrument, and I really wanted to sing for personal reasons — it was my way of expressing my frustrations.” Deciding to take a risk at the point in her life “when you should be taking a lot of risks,” she “jumped ship” and applied to graduate schools. “I got into Eastman and CIM and chose CIM, came to Cleveland and did my masters, artist diploma, and doctorate there. It was the most liberating, fascinating, amazing nine years of my life.”

Jung Eun Oh was already on the CIM faculty when she earned her doctorate in 2012. “The experience changed my life, changed the way I am, and the way I relate to people. It made me into a much better person than I would have turned out to be otherwise.”

Meanwhile, she met her future husband, Jeffrey Rathbun, the assistant principal oboe of The Cleveland Orchestra. “If I’d gotten into music just to meet Jeff, it would have been worth it!” she said. The occasion was Aspiration, a piece he had composed in the 1990s on commission from his teacher, the late John Mack. “When Mack passed away in 2006, Jeff really wanted to perform the piece in his honor. He started looking around for a soprano. Originally, he wanted Kathryn Brown to sing it, but she had two small children and the piece was very demanding, so she ended up recommending me.”

Eventually, Oh decided to return to the financial industry but with a new synthesis in mind. “As a student, a faculty member and a teacher who arranged a lot of concerts for my students, I saw the back office aspect of the music industry and realized I needed to be in both worlds. My long-term goal when I left CIM in 2012 was to bring the financial management world and the arts world together. I knew the financial world, and I was worried about the sustainability of arts organizations. Because, ultimately, my passion is music, I’m hoping that there will be opportunities in the future to combine the two sides of my life.”

Meanwhile, Jung Eun Oh is enjoying some artistic latitude. “One of the great things about being in my position is that I can pick and choose when I want to sing and what I want to sing. I can sing music that inspires me and sing for causes that I believe in. I’m enjoying that very much.”

One musical outlet that means a great deal to Oh is Jodi Kanter’s Stars in the Classics. “Jodi has been a very good friend of mine. When I left CIM I was taking on too much and I was too young to know that I could say ‘no.’ I took a hiatus, and Jodi has always encouraged me to sing when I wanted to stop. I owe her a lot more than I can articulate.”

In addition to her Stars cabaret performance on July 23, Jung Eun Oh will sing Poulenc songs for the annual PAND (Performers and Artists for Nuclear Disarmament) concert on August 6. And there’s always the possibility of some new music from the pen of Jeffrey Rathbun — perhaps a song cycle for soprano. “He’s been busy writing commissioned pieces, but I will be bugging him about that,” she said. How wonderful would it be for us to choose the text together as a soprano-composer team!”