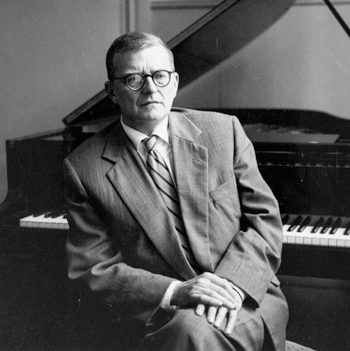 The Kent/Blossom Music Festival continued its summer series with an all-Shostakovich program at Kent’s Ludwig Recital Hall on Wednesday evening, July 20. The concert of chamber works showcased the prowess of Kent State professors, as well as members of The Cleveland Orchestra.

Due to RNC road closures and a misleading GPS, these ears were unable to hear the first piece, Four Waltzes for Flute, Clarinet, and Piano. Orchestra members Marisela Sager (flute) and Robert Woolfrey (clarinet) joined Kent State faculty Jerry Wong (piano), with Sager on piccolo for the final “Barrel-Organ Waltz.” A trusted clarinettist in the audience noted that “The brightness and playfulness of Woolfrey’s playing was equally matched by Sager.”

Wong returned alongside Cleveland Orchestra assistant principal violist Stanley Konopka for the Sonata for Viola and Piano, Op. 147, Shostakovich’s final composition. The solemn work is reflective of the death-obsessed sentiments the composer harbored at the end of his life.

The opening “Moderato” begins with a steadily creeping piano line over ghoulish viola pizzicatos, later transitioning to forceful piano chords that chase the viola line, played by Wong like a giant’s “Fee-fi-fo-fum — I smell the blood of a viola player!” Konopka fought back with large chords of his own, brilliantly capturing their agony with his playing. The following “Allegretto” begins with the feeling of a demented carnival ride colliding with a Totentanz.

Wong and Konopka passed material back and forth with ease — Wong’s fine attention to detail giving life to even the simplest “boom-chicks.” The two brought out the most hauntingly elegant qualities in the final “Adagio” — a hypnotic trance that culminates in what can only be described as an oasis of death.

While the performers captured the fierce spirit of the scherzo, the piano’s muted upper register drained some energy from their vivacious performance. Bormann’s violin line bloomed over the cello pizzicatos in the fourth movement, which finished spookily. The ensemble thrived in the rhythmic vitality of the dance-like section. The ending put the type of smile on your face you’d wear when seeing a dear old friend after much too long.

END_OF_DOCUMENT_TOKEN_TO_BE_REPLACED

Franz Welser-Möst led the final bows on Saturday night at Severance, like the star of any show should. The Cleveland Orchestra’s music director is in his element presiding over the ensemble’s annual opera production, which this season packs the drama. Verdi’s Otello — in a concert staging that opened May 21 and runs for two more performances (May 26 and 29) — demands big voices, instrumental forces to match, and a conductor who can give it all shape and direction. END_OF_DOCUMENT_TOKEN_TO_BE_REPLACED

The cimbalom was the feature of the show, an instrument capable of taking on many personas. Its performer, Chester Englander, has shaped his career around the instrument, and has inspired composers to write more repertoire for it, some of which was presented on the program. END_OF_DOCUMENT_TOKEN_TO_BE_REPLACED