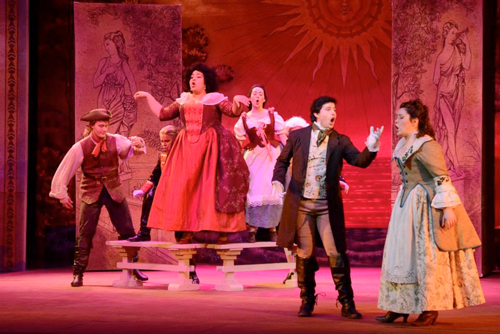 “The Pretend Gardener” tells an even loonier story than most 18th-century operas. The Gardener in question is the noblewoman Violante, who has thus disguised herself to keep an eye on her beloved, Count Belfiore, who earlier stabbed her in a jealous fit and left her for dead (she seems to have forgiven him).

Belfiore is engaged to the local mayor’s niece, Arminda, but the mayor himself has fallen for Sandrina, the new gardener (who is really Violante). Meanwhile, the cavalier Ramiro has his eye on Arminda, and Belfiore on Sandrina (aka Violante), but no dice. A warrant arrives charging Belfiore with murder, leading Arminda to have Sandrina abducted and set loose in the woods to be eaten alive by beasts. A full-cast search in the forest drives Sandrina and the Belfiore mad (they think they’ve been apotheosized into Greek gods). Long story very short: everybody recovers their sanity and reconciles. Couples get sorted out and marriage finally solves everything. 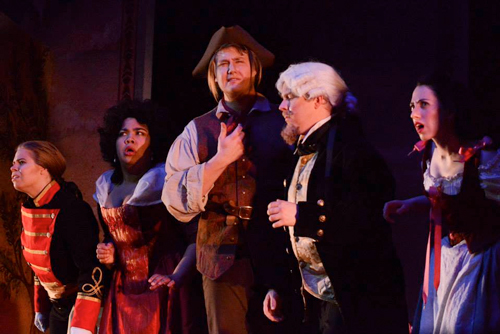 Smith wisely took his pruning hook to the 18-year-old Mozart’s score, trimming something like ten arias and cutting countless bars of recitative. The result is a funny, musically satisfying, two-and-a-half-hour production that succeeds on the quality of the cast’s singing and its high level of comedic acting. You probably won’t leave humming any tunes — the music is definitely Mozart, but not his later stick-in-the-ear variety — but it’s well-crafted for the purpose, and never sounds immature or derivative.

La finta was double-cast. On Thursday, Roxy Star Callan and Cory Svette played Sandrina and Count Belfiore to marvelous effect, impressive both as vocalists and actors (Svette came close to crossing a line with his over-the-top facial gestures, but those proved to be just hilarious during the mad scene in the forest). Stephen Rieger created a thoroughly buffoonish Mayor (Podestà) and Rayna Brooks a dramatically formidable, vocally splendid Arminda.

Alyssa Holley, small of stature but tall of character, was commanding in the trouser role of Ramiro. As Serpetta and Nardo, Sarah Nadler and Sean Burns completed the vocally strong and stage-savvy cast. 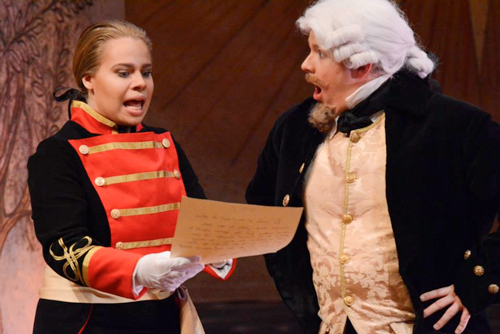 A small orchestra (a few more violins would have filled things out) did heroic duty in the pit, led by guest conductor Clinton Smith, who kept the zany plot moving along with a fine sense of pace. He also played stylish accompaniments during the recitatives, inspiring the singers to toss off their Italian dialogue with the confidence of seasoned pros.

Benjamin Wayne Smith’s staging made fine use of the set, which featured triangular flats that could be moved to create interesting patterns and suggest changes of venue. His attention to comic detail made the action continuously interesting to watch. For example, references to instruments brought the actors to the lip of the pit to engage with the orchestra. During the forest scene, the line, “I hear Orpheus’s lyre” was ironically heralded by music from the bassoon (a mad scene indeed!) 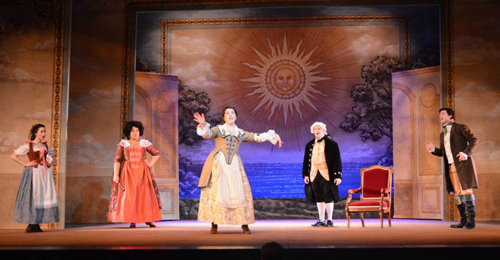 Melanie Boeman’s costumes and Jeff Herrmann’s lighting design added to the handsome visual appeal of the show. And Smith’s supertitles, projected on a scroll integrated into the set rather than onto a screen, were pithy, colloquial, and set in a stylish font.