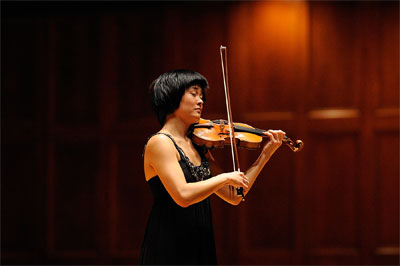 There are many reasons to admire violinist Jennifer Koh. She possesses rock-solid technique and rhythm, impeccable intonation, and a tonal palette worthy of a master-painter. And her musical decisions are always intelligent and thoughtful. All of these attributes were on display when the dynamic violinist returned to her alma mater for a performance of her “Bach and Beyond Part III” program. The concert on Sunday, April 12 in Finney Chapel was presented as part of Oberlin College and Conservatory’s Artist Recital Series.

Koh’s program, which could be sub-titled “Bach — Beyond — and Bach again,” featured four demanding unaccompanied works, beginning and ending with Bach. In Bach’s Sonata No. 2 in A minor, Koh quickly established a “wow” factor with her controlled playing of the opening Grave. During the fugue, Koh never lost track of the theme. Her sweet Andante, with its perfectly balanced harmonic line, gave way to a fiery allegro.

Luciano Berio’s Sequenza VIII for solo violin is a muscular work with a powerful impact. The music pulls, jerks, steps-on and tramples listeners, and Koh’s performance was mesmerizing. The exotic, muted ending of the work left you breathless. Never has music that beats you up sounded so good.

John Harbison’s For Violin Alone packs a more elegant punch, but like the Berio, it too is modeled after Bach’s partita form. Written in six movements — Ground, Dance I, Air, March, Dance 2, and Duet, plus Epilogue — the piece allowed Koh to show her humorous musical side, and she did so with aplomb. The “Duet” was especially engaging. It sounded like two divas singing in perfect harmony but battling it out for the top prize.

The second half of the program consisted of a single work, Bach’s Sonata No. 3 in C major. Lasting around 25 minutes, it begins with a peaceful “Adagio” from which Koh transitioned beautifully into the complex “Fuga” based on the chorale Komm, heiliger Geist, Herr Gott. During this extensive movement, Bach uses such techniques as stretto, inversion and double counterpoint. Koh’s performance was brilliant. The “Largo” was heartfelt, and the concluding “Allegro assai” was reminiscent of a walk in the countryside.

Koh’s Bach and Beyond programs are so well-constructed that it is easy to recognize the connections between the pieces. A no-fuss player who gets the job done with elegance and panache, Jennifer Koh knows how to musically communicate with her audience, and she leaves you wanting more.

The history of classical music sometimes borders on mythology. The music on the Akron Symphony’s Saturday, February 22 program has taken on this fabled, quasi-historical quality — Mozart’s Requiem, Schubert’s “Unfinished” Symphony, and Beethoven’s over-finished Leonore Overture No. 3. Fortunately, in performance the music more than lived up to the story. END_OF_DOCUMENT_TOKEN_TO_BE_REPLACED

Cleveland’s Baroque Orchestra celebrated the Valentine’s Day weekend with four performances of “L’Amore: An Old Italian Valentine.” I heard the second concert on the evening of Valentine’s Day itself at St. Paul’s Episcopal Church in Cleveland Heights. Apollo’s Fire conductor and harpsichordist Jeannette Sorrell greeted the audience with the adage, “Italian is the language of music, of the angels, and of love.” END_OF_DOCUMENT_TOKEN_TO_BE_REPLACED

Every so often, the first seconds of a concert bring neither anxiety over how the rest will go nor twitchy overstimulation, neither boredom nor ecstasy, but a satisfying assurance. Some performances click right away, the musicians’ technique unimpeachable, their artistry and expression powerful, their manner warm but professional. Such concerts hold attention in a special way — the chances of a misstep negligible enough that listening never involves comparison to an abstract standard. In the Phaeton Trio’s recent tour de force in Rocky River, the initial gestures of the performance set a high standard that held throughout. END_OF_DOCUMENT_TOKEN_TO_BE_REPLACED

Musicians love a good metaphor: take, for instance, that of summiting a mountain. When a violinist speaks this way after playing all of Bach’s partitas, or a soprano recalls preparations for a Wagner opera, the image of the artist mounting some hostile peak offers implications of persistence, struggle, and of course triumph. Pianists might describe Beethoven’s sonatas this way. But how many have actually played at the top of a mountain? Archival video confirms that French pianist Pierre Réach literalized this image of the soloist at the summit over twenty years ago. A recent concert in Cleveland confirmed that the figurative Everest of Beethoven’s piano music still bears his banner as well. END_OF_DOCUMENT_TOKEN_TO_BE_REPLACED

The Cleveland Orchestra — or at least half of it — marked Valentine’s Day with a straight-through, 50-minute concert led by Belgian early music guru Philippe Herreweghe. The February 14 performance, marketed as a romantic evening of orchestral classics, played to a packed house (marketing works!). END_OF_DOCUMENT_TOKEN_TO_BE_REPLACED