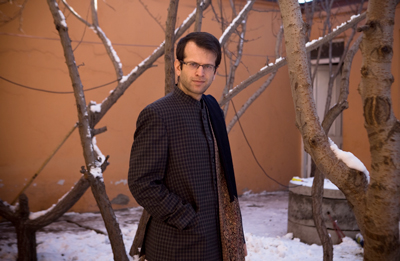 American violinist, conductor, and composer William Harvey has dedicated a large part of his professional career to his passion, Cultural Diplomacy. Harvey, who holds degrees from the Jacobs School of Music at Indiana University and Juilliard, first gained international recognition when he lead the Afghan National Youth Orchestra, a group he founded, on a historic tour of the United States in 2013.

During a recent telephone conversation, Harvey gave full credit to the success of the tour to the founder of the Afghanistan National Institute of Music. “For 4 years I taught at the school, so the tour was done under my capacity as an employee. I worked like a dog for sixteen months raising $600,000, and exchanging thousands of e-mails. But all that I did was thanks to the support of the founder and director, Dr. Ahmad Naser Sarmast.”

On Friday, January 16 at 1:00 pm at the Oberlin Conservatory, William Harvey will present a lecture entitled “Making a Difference in the World with Chamber Music”. The lecture is free and open to the public as part of Oberlin’s Winter Chamber Music Festival.

In 2005, Harvey founded Cultures in Harmony (CiH), an organization that is currently celebrating its tenth anniversary. In 2010, the CiH was named a ‘Best Practice in International Cultural Engagement,’ along with the Kennedy Center & Library of Congress, by the US Center for Citizen Diplomacy. CiH workshops in Pakistan, Qatar, Egypt, the Philippines, Tunisia, Zimbabwe, and Mexico have benefited thousands of young musicians. Harvey has lectured about CiH at the British Parliament; at the Institute for Cultural Diplomacy in Berlin, Germany; at the Escuela Superior de Música in Mexico; and at Aga Khan University in Karachi, Pakistan.

Harvey was first bitten by the Cultural Diplomacy bug following the events of September 11, 2001. He quickly mentioned the irony that our conversation was taking place the same day as the terror attack on Charlie Hebdo. Harvey recalled the events that occurred at Juilliard on September 11. “Initially there was not a lot of clear information available. There was a time that morning when I think there were as many as eight airplanes unaccounted for, and there was a fear that perhaps all tall buildings in New York were potential targets. As a precaution, the Juilliard residence hall was evacuated and we were in the basement from about 10:30 in the morning until 7:00 at night. There was such a felling of helplessness – we were listening to the radio and hearing reports of doctors and engineers rushing to ground zero.

“A lot of the students wanted to do anything that we could, but we felt helpless. What could a musician possibly do at this time? One of the older students who was a resident assistant came up with the idea of playing at places around the city where victims were recovering, and also at the 69th Regiment Armory that was serving as a center where families of the missing could go and await news of their loved ones. So I signed up and five days later got a call to play at the armory. And that was the experience that changed me. That experience and the letter that I wrote about it, which went viral, really showed me that music can make an impact. It can play a central role in the positive transformation of society.” You can read Harvey’s “The Letter that Started it All” here.

Harvey explained that since that experience he has been less satisfied with the idea that musicians are just good for some nice entertainment on Friday nights. “I think our role can be much bigger than that. I’m a big believer in what Dr. Joseph Polisi, the president of Juilliard, calls ‘The Artist as Citizen.’ In fact that is the title of his book. I believe that we are citizens first and artists second, although we don’t need to think in terms of priority. For me, being an artist is how I function as a citizen.”

Since its founding, Cultures in Harmony has created Cultural Diplomacy projects in 15 countries. How did he go about choosing the first two, Moldova and Tunisia? “That’s a very good question. Looking back on it now that we are turning ten years old, there could have been more method to how we selected countries. Given that September 11 was the initial inspiration, obviously throughout the ten years we have particularly tried to engage with Muslim majority countries. So we’ve been to Tunisia, Egypt, Qatar, Turkey, and Pakistan. That said, the idealism has to be tempered by pragmatism and I’ve found that the most important guarantor of a successful project is having a partner in another country who responds quickly to e-mail with lots of details in their message with good grammar and punctuation.”

When it come to Cultural Diplomacy, Harvey feels that the United States made a mistake in 1999 when it closed its Cultural Diplomacy organization, the United States Information Agency, and folded it into the State Department as the Bureau of Educational and Cultural Affairs. “Remember that two years after they closed the agency, 9/11 occurred. I think the lesson to be learned is that a country with the size and influence as the United States can never afford to ignore its perceived image and its people-to-people relations with any country.”

Harvey believes that establishing people-to-people relations through the universal language of music is important to many countries. “One thing we found particularly in Cameroon, the Philippians and Papua-New Guinea, is that when musicians from other countries show an interest in a country’s local music by working with local musicians, it helps increase the interest in that country’s traditional culture among the youth.”

During one project in the Philippines, CiH musicians worked with teenagers from the Tala-Andig indigenous community in Miarayon. During another project in the Philippines this past August CiH sent four musicians to collaborate with the Cartwheel Foundation, which provides education for indigenous peoples. “Our musicians went to the Tagbanua on the island of Culion. In some Tagbanual communities the traditional music has died out but Cartwheel found Tagbanual traditional musicians and brought them with our musicians so that side-by-side they could present their own culture to the youth for whom it was already something from the past and unfamiliar. So when I hear traditional sitar players in Pakistan talk about how their audiences are getting older I’m thinking, hmm, this sounds like the marketing manager of an American symphony orchestra.”

A continuous challenge for Harvey is fund-raising and answering questions like, ‘how do you measure the success of a project?’ “It’s very tricky, and honestly, I think that if everyone in the field of Cultural Diplomacy were asked to measure and prove that they were successful, the entire field would collapse overnight. Cultural diplomacy is a tougher sell to donors because they want to see that you are giving medication to people who need medicine and textbooks to kids who need them. We have been asked things like ‘you’re going to these countries; what are you leaving behind and how are you helping them?’

“To me that’s not what cultural diplomacy is all about. To me it’s about creating a relationship of equals, and music can create an equal playing field. So when it comes to measuring success, the success that I would measure is found in testimonials, because we are working in a field that is very subjective. As an audience member told me after a concert in Karachi, Pakistan back in 2009, ‘don’t just make a link, build a relationship. You are feeding an entire nation.’ So what I take away is that if Cultural Diplomacy is considered alongside other not-for-profit endeavors where the be-all-and-end-all is sustainability, what is it that cultural diplomats must sustain? The answer is, the relationship.”

Jackson began the program with a recitation of Langston Hughes’ poem “Helen Keller” — the first of five poems by Hughes that served as interludes between each piece on the first half. END_OF_DOCUMENT_TOKEN_TO_BE_REPLACED

Pianos with pins and tape on strings, a bass drum and tam tam, crotales, Almglocken, and vibes. Microphones were hooked up all around the instruments. The feed was sent to speakers around the room. Lighting designer Nicholas Houfek hung incandescent globes over the arrangement of instruments from thin black wires stretching across the beams. END_OF_DOCUMENT_TOKEN_TO_BE_REPLACED

From the podium, Elim Chan set an ambitious tone for the evening. The rising star conductor, here in her Cleveland Orchestra debut, has a commanding style, and every twist and turn in Saturday’s performance tracked closely with her baton. END_OF_DOCUMENT_TOKEN_TO_BE_REPLACED