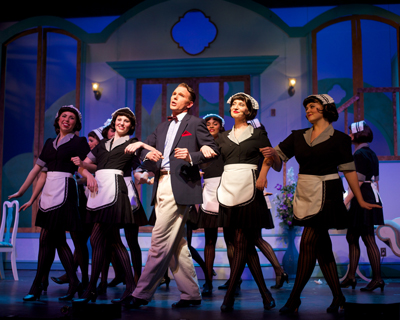 Get your laughter on, as you’ll surely need it in this marvelous recreation of the 1926 Broadway musical that the super-talented Gershwin brothers wrote for the great Gertrude Lawrence. With a book by Guy Bolton and P. G. Wodehouse and a little help from Howard Dietz, Oh, Kay! is, in the words of director Ted Christopher, “a madcap romp — a drawing room comedy, with a  Busby Berkley dance routine in the middle of it.”

A better description will not be found. The opening scene unfolds with a chorus line of twelve leggy young ladies dressed in maids’ costumes wafting their feather dusters over the living room of Jimmy Winters’ Long Island mansion. They reprise their high-energy routine another half-dozen times throughout the show.

The story line is a bit vague, but with all the wonderful songs, who needs a complicated plot? Briefly, the above-named Jimmy Winters (the fabulous Nathan Brian) has brought Constance, his new wife (Jessamyn Anderson), to his mansion for their honeymoon. Unbeknownst to him, while he’s been away the house has become a warehouse for bootleg liquor. (The show is set during Prohibition.) There’s just one problem: his first wife has not yet had their marriage annulled, because she wants more money. Poor Jimmy has become a bigamist. Constance retreats to call her father, a Judge, wonderfully portrayed by Boyd Mackus.

As Jimmy reminisces a bit, he recalls the charming “mermaid” who came to his rescue the previous summer when he nearly drowned. She disappeared before he could get her name, but he knows he can never forget her. Then, to his surprise, she emerges from the mist to land on his terrace. Emily Hagens is the lovely Lady Kay, sister of the Duke of Durham, (Kyle Yampiro), who is the actual bootlegger. Adding to the confusion is the pair of bootlegging assistants: the marvelous dancer Spence Reese as Larry Potter and Samus Haddad as “Shorty” McGee, who also occasionally doubles as Jimmy’s butler. As you might expect, there is also a befuddled revenue officer, Jansen, played by Benjamin Krumreig.

Sarah Best and Alexandra Vecchio are the twins Phillipa and Dolly, who dance and sing and look gorgeous while they’re contributing to one of the standing jokes — are they really two people or only one? Ms. Best and Mr. Reese nearly stopped the show with their terrific tap-dancing to “Fidgety Feet” in the second act.

When the Judge makes his appearance, he is determined to see Constance married to Jimmy, and is prepared to immediately preside over the vows. Jimmy now also wishes to be married, but to the Lady Kay. Mayhem ensues, with mistaken identities, disappearing characters, and multiple misunderstandings.

Some of the funniest lines you’ll ever hear tumble around the stage and into the audience, prompting much happy laughter, interspersed with wonderful singing from the talented cast. The orchestra, conducted by J. Lynn Thompson, sounded fabulous. The choreography of Carol Hageman added brilliance to the overall appearance of this happy presentation. The versatile set was designed by Cassie King and the lighting by Erich Keil. The mostly-beautiful and period-appropriate costumes were designed by Stefanie Genda.

But in the end, it’s the music that provides the enjoyment here. “Someone to Watch Over Me”, “Clap Yo’ Hands,” and “Do-Do-Do” were the ones audience members were humming or whistling as they left the theater on Saturday evening. Thank goodness for the Gershwins!

Jackson began the program with a recitation of Langston Hughes’ poem “Helen Keller” — the first of five poems by Hughes that served as interludes between each piece on the first half. END_OF_DOCUMENT_TOKEN_TO_BE_REPLACED

Pianos with pins and tape on strings, a bass drum and tam tam, crotales, Almglocken, and vibes. Microphones were hooked up all around the instruments. The feed was sent to speakers around the room. Lighting designer Nicholas Houfek hung incandescent globes over the arrangement of instruments from thin black wires stretching across the beams. END_OF_DOCUMENT_TOKEN_TO_BE_REPLACED

From the podium, Elim Chan set an ambitious tone for the evening. The rising star conductor, here in her Cleveland Orchestra debut, has a commanding style, and every twist and turn in Saturday’s performance tracked closely with her baton. END_OF_DOCUMENT_TOKEN_TO_BE_REPLACED